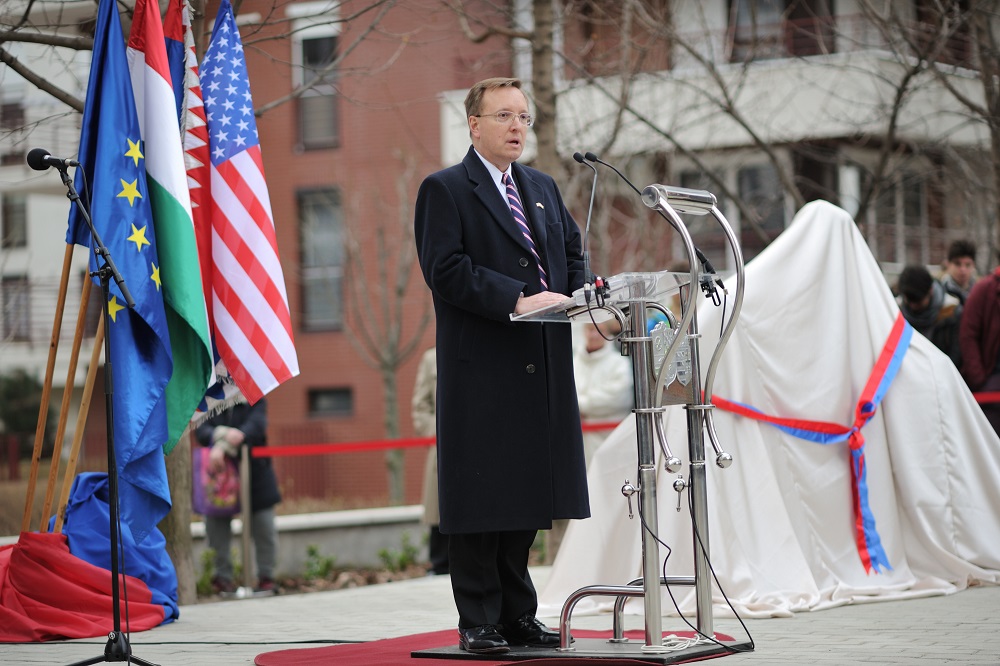 at the Tom Lantos statue dedication

I am honored to be here on behalf of the United States Government, to commemorate the 90th birthday of Representative Tom Lantos and to dedicate this beautiful work of art in his honor.

President John Kennedy, the centennial of whose birth we marked last year, said:

Today, Hungary and Hungarians, and the United States and Americans, together, honor and remember Tom Lantos.

I had the privilege of meeting Representative Lantos on several occasions during my career, and I affirm the sentiments of former Vice President Biden: Tom Lantos was a true gentleman and statesman; passionate about his views, firm in his support of the democratic process, and always focused on the dignity of his fellow humans, no matter their political stripe.

Last Saturday, as many of you know, we commemorated the January 27, 1945, liberation of Auschwitz-Birkenau, the largest of the Nazi concentration camps, and the place where nearly half a million Hungarians died.  It is fitting that we honor Representative Lantos today, just a few days after Holocaust Remembrance Day.

Tom Lantos was born and raised near here and survived unimaginable persecution during World War II because of his religion.  Fortunately, he survived, and when the war ended, Tom Lantos earned a scholarship to study in the United States, and he and his wife, Anette, eventually became American citizens.

Later, he became the only Holocaust survivor to be elected to Congress.  Among the most respected members of the U.S. House of Representatives, Representative Lantos served the people of his California district for more than 27 years.  He worked to ensure that the world his children and grandchildren would inherit would be a better and safer place.  He cofounded the Congressional Human Rights Caucus and served for decades as Chair of the House Foreign Affairs Committee.

We still have a lot to learn from him.  Tom Lantos called on all of us – not just those in government service, but all citizens, all human beings – to show courage in the face of fear, to smooth difficulties and correct mistakes.  He called on us to defend our values.  He called on us to remember that the very essence of our civilization, the belief we hold most dear, is the inherent dignity and worth of every single person.  Tom Lantos sought and built consensus. The world would be a better place if we were blessed with more leaders like Tom.  Now more than ever, our societies must embrace a greater justice, the kind that Tom Lantos advocated all his life, that recognizes the inherent dignity of every human being.

Tom Lantos did not abandon those ideals; he did not forsake Americans’ or Hungarians’ commitment to the inherent dignity of every human being.  He stood firm for what was right, just and in the defense of the values that are the bedrock of Hungarian-American cooperation – during his lifetime, now and for the future.

All his life, Representative Lantos remained a proud Hungarian, and a proud son of Budapest.  Hungarian by birth, and a dedicated American by choice, he worked for the best for both of his countries, and he worked to strengthen Hungary’s ties to the West; to bring the stability, security, and prosperity that he wished for the land and the people of his birth.  Far from seeing his love for America and his love for Hungary as being in competition – Tom Lantos believed, as I do, that the prosperity of our two nations is joined together, as allies and friends.

There can be no doubt that the world is a better place because of Tom Lantos – for his life, his service, and his legacy, including the incredible contributions of his wife, daughters, grandchildren and great-grandchildren– some of whom we are fortunate to have join us here today.  The great principles for which Tom stood, to which his family has remained dedicated, and which remain as important as ever, have not been lost.  They are right here. We just need to see them again amid the rancor, the noise, the din of the moment.  We need to defend them, as did Tom.

Thank you very much – köszönöm szépen.