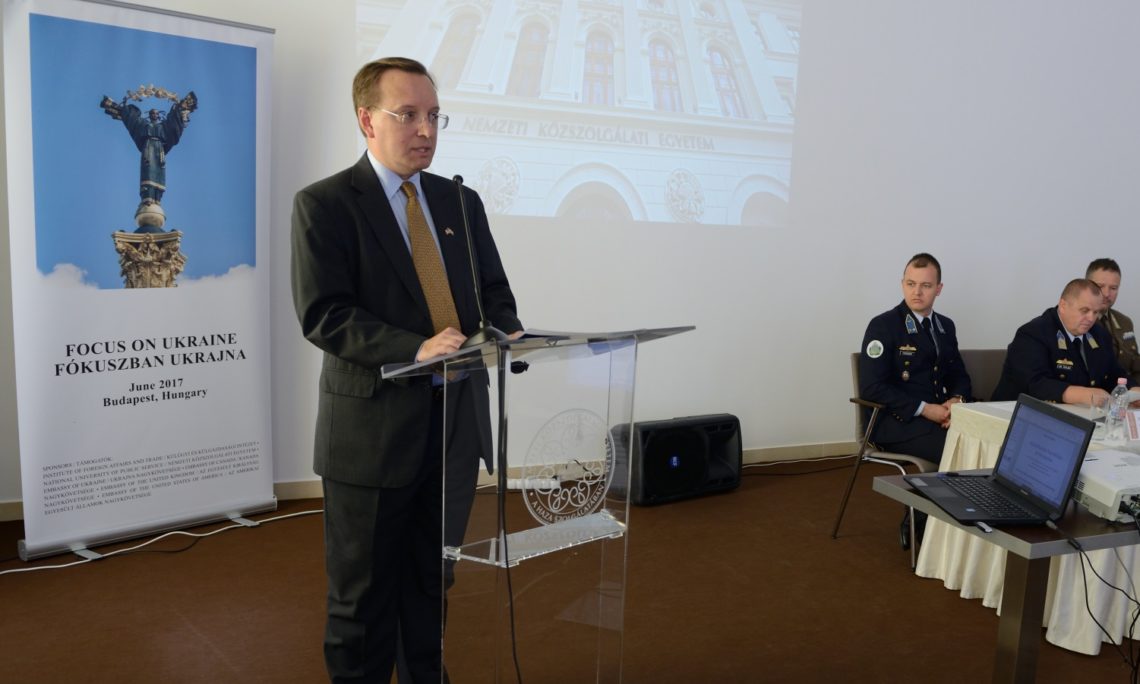 Good morning everyone, and thank you for coming.  As part of Focus on Ukraine and in cooperation with our colleagues at the British, Canadian, and Ukrainian embassies, we welcome you all to this panel on Hybrid Warfare.  We thank the National University of Public Service for hosting and identifying experts for this event, and for your valued partnership.

Ukraine is under attack. We come together today to explore and understand the unique blend of traditional, indirect, and cyber warfare that Russia currently deploys against the people of Eastern Ukraine.  Russia trains, funds, and arms violent separatists; increases its arsenal of heavy weapons to intimidate and to bully; wields energy as a geostrategic weapon; launches cyberattacks and malicious intrusions against public and governmental networks; and maintains a smokescreen of disinformation and propaganda to mask their actions and foster instability.

This is not warfare as we have traditionally known it. What we see in Eastern Ukraine is an aggressor pretending to not be a belligerent in a conflict in order to maintain the thinnest claims of deniability.  We see the intentional targeting of civilian institutions by military means other than traditional combat.  We see an all-out effort to destroy a sovereign nation and erase the lines between peace and war, in a manner not unique to Ukraine.  Independent nations across Europe – and even the United States – have, to varying degrees, felt the sting of this new form of aggression.  This type of warfare is dishonest, subversive, and laden with the possibility of ensuring a lasting, toxic conflict in Ukraine; one that would only serve the political ambitions of Russia.  This is not acceptable.

The United States has found and continues to find Russia’s actions illegal and inhumane.  We call for the speedy return of the Crimean peninsula, an end to Russia-backed partisan violence, and the full implementation of the Minsk agreements by all parties, particularly Russia.

Our stance on Ukraine has not changed: we support the sovereignty and territorial integrity of Ukraine.

Holding these academic and strategic discussions—including today’s—is an important demonstration of unity, strength, and discourse.  It is our duty as allies, responsible members of the international community, and defenders of sovereignty, territorial integrity, and human rights.  Once again, thank you for coming.  I am certain you will find the panels of dedicated experts here informative and engaging.

Now, it is my pleasure to turn it over to one of our partners for Focus on Ukraine, the distinguished Ukrainian Ambassador to Hungary Liubov Nepop.