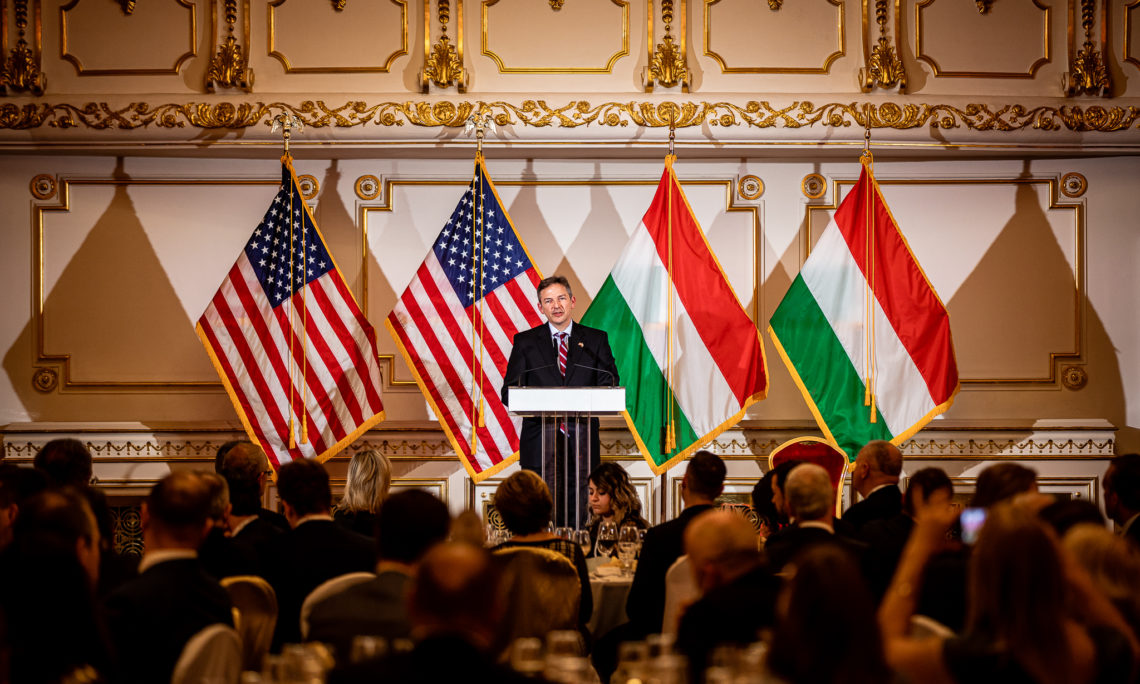 Thank you.  It is great to be with you all tonight on this special occasion to celebrate religious freedom.  On behalf of the Embassy of the United States here in Budapest I would like to thank the government of Hungary, particularly State Secretary Tristan Azbej and his team, for co-hosting this important event with us tonight.  And thank you as well to Pastor Brunson for the opening prayer, and to Deputy Minister Balazs Orban and State Secretaries Peter Sztaray and Katalin Novak from the Hungarian government for being here this evening.

I know many of you have traveled from around the world to participate in the Hungarian government’s conference, which kicks off tomorrow.  We are pleased to have distinguished representatives from Hungary’s diverse religious communities and civil society here with us this evening.  We are thankful as well for the presence of USAID Deputy Administrator Bonnie Glick and White House Domestic Policy Council Director Joe Grogan – which underscores the importance that the U.S. government places on advancing religious freedom around the world.  Thank you all for joining us in celebration of U.S.-Hungarian cooperation in protecting persecuted religious minorities.

Twenty-one years ago, the International Religious Freedom Act of 1998 was signed into U.S. law.  This landmark legislation set out three ambitious priorities: to promote religious freedom as a foreign policy of the United States, to promote greater religious freedom in countries which engage in or tolerate violations of religious freedom, and to advocate on behalf of individuals persecuted for their religious beliefs and activities in foreign countries.  While it created important new ways to protect religious freedom, the law itself was based on something foundational to the United States – the bedrock belief that all people should have the right to worship however they please.  Each year, when Americans celebrate Thanksgiving on the fourth Thursday of November, we are reminded that our ancestors came to the New World to escape religious persecution.  “And so we gather each year to give thanks for the freedoms – including the freedom to practice a faith or no faith at all – that we hold dear.”

Unfortunately, religious persecution and repression continue around the world today.  More than 80 percent of the world’s population lives in religiously repressive environments.  In much of the world, governments and non-state actors prevent individuals and groups from exercising their rights to freedom of thought, conscience, and religion.

In response, the U.S. Government has accelerated its efforts to promote religious freedom as a core objective of U.S. foreign policy.  This past July, Secretary of State Michael Pompeo hosted the second Ministerial to Advance Religious Freedom in Washington D.C.  The 2019 Ministerial was the largest religious freedom event of its kind in the world, which convened more than 1,000 civil society and religious leaders and 105 foreign delegations.  The Department of State’s International Religious Freedom Fund provides rapid assistance to victims of persecution throughout the world, including to assist victims of the Easter Sunday terrorist attacks in Sri Lanka.  And the State Department is now moving forward with plans to launch an International Religious Freedom Alliance, announced by President Trump during a signature event on protecting religious freedom at the United Nations General Assembly in September.  The Alliance will in part serve as a global platform to better coordinate state and non-state efforts to advance the right of freedom of religion or belief.  This reflects the fact that we all must work together to promote and protect religious freedom.

Here in Hungary, the U.S. Embassy supports religious freedom through maintaining important relationships with all of Hungary’s diverse religious and secular groups, which includes hosting interfaith prayer breakfasts and roundtables attended by many of those faith leaders present here tonight.

We also work closely with our Hungarian government partners, including State Secretary Azbej’s office, in helping to advance religious freedom abroad.  As you heard from Deputy Administrator Glick, U.S.-Hungarian cooperation in northern Iraq has helped vulnerable religious and ethnic communities targeted by ISIS to rebuild schools, hospitals, and homes.  The nearly $340 million that the United States has provided to Iraq since 2017 to support ethnic and religious minorities reflects the United States’ commitment to promoting the human rights and wellbeing of minorities around the world.

This year marks the 398th anniversary of the first Thanksgiving, when the Pilgrims celebrated their arrival as migrants to new shores, having escaped from religious persecution.  2019 also marks the 30th anniversary of 1989, when the Berlin Wall fell, the Iron Curtain lifted, and the Hungarian people and people across Eastern and Central Europe were finally able to pursue a path of democracy and liberty, including religious liberty.  In 1989, the U.S.-Hungarian relationship entered a new era that would see us grow closer as friends, partners, and – 10 years later in 1999 – allies.  Today, we are working together stronger than ever so that, in the words of Ambassador at Large for International Religious Freedom Sam Brownback, “the Iron Curtain of religious persecution can come down once and for all.”  Together, and with our friends and partners here tonight and around the world, we can make that goal a reality.

In closing, I’d like to raise a toast and – in the spirit of the holiday – give thanks.  At that first Thanksgiving in 1621, Pilgrims and Native Americans gathered to break bread and share their bounty in celebration of their newfound friendship.  To this day it remains a Thanksgiving tradition to welcome friends both new and old, and visitors from afar, to share their gratitude over an abundant meal.  We’d be here all night if I counted everything for which I’m grateful, so I’ll just say here that I am thankful for all the blessings in my life, including our being here together tonight, and for your continued partnership and cooperation and friendship.