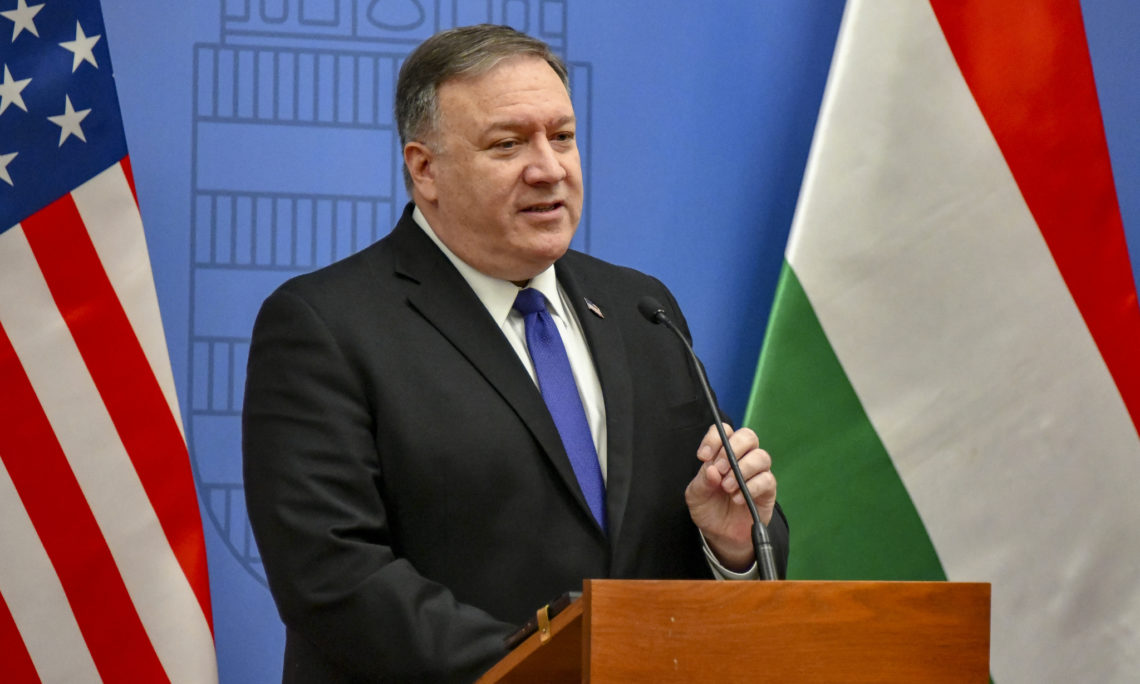 The Secretary was greeted upon arrival at the Liszt Ferenc International Airport by Chargé d’Affaires David Kostelancik, Hungarian Minister of State Levente Magyar, and Head of Protocol of the Hungarian Ministry of Foreign Affairs Edina Pasztor.

On the way to the Embassy, Secretary Pompeo visited the Statue of President Ronald Reagan on Szabadság tér. The statue was unveiled by former Secretary of State Condoleezza Rice in 2011, 100 years after the birth of President Reagan, who is remembered for the encouragement he gave Hungary and other former Central and Eastern Europe Soviet satellite states to end communism and regain their freedom. On the 30th anniversary of the fall of Communism, it was even more important for the secretary to pay his tribute.

“For three decades, the Hungarian people have worked to build a free & prosperous nation in the heart of Central Europe. The United States has been with you from the outset.” –Sec. Pompeo

After visiting the Reagan statue, Secretary Pompeo was welcomed in our building by our Embassy staff, who were all very eager and excited to meet the State Department’s “big boss”. Secretary Pompeo thanked us for our dedicated work and emphasized the importance of working together as a team. Secretary Pompeo also opened the floor to questions, and even spent time for some photos and selfies.

During his visit at the Embassy, Secretary Pompeo also learned about the history of our building. Chargé d’Affaires David Kostelancik showed him the former office of Swiss Consul Carl Lutz, who helped save as many as 50,000 Hungarian Jews from deportation during World War II, and the living quarters of Cardinal József Mindszenty, who took refuge in our building during the Hungarian Uprising of 1956.  For its unique architectural design and historical significance, the Chancery has been included in the U.S. Secretary of State’s Register for Culturally Significant Property in 2016. Read more about the Embassy history here >>

Defense Minister Benko also hosted Secretary Pompeo for a productive meeting where they agreed to deepen our defense cooperation. The secretary thanked Hungary for its ongoing efforts to support our alliance and shared commitment to NATO.

And to close out the evening, Secretary Pompeo met with Prime Minister Orban and discussed strengthening the U.S.–Hungarian relationship, regional issues, Western Balkans, energy security and the transatlantic relationship.