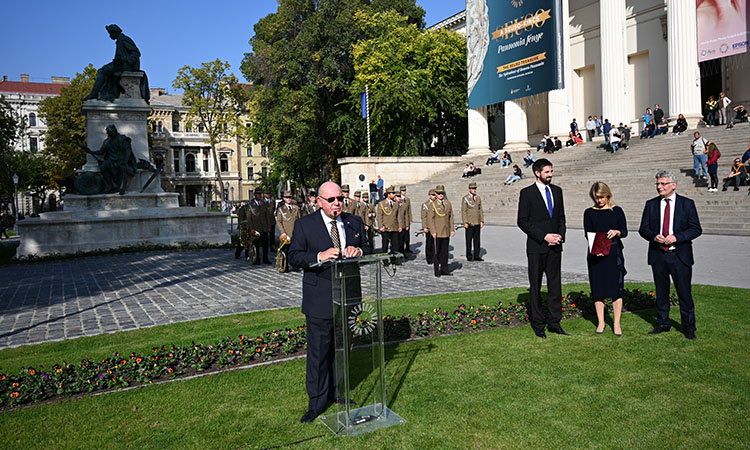 One hundred years ago, as the world was recovering and rebuilding from World War One, Major General Harry Hill Bandholtz was serving in Hungary as the U.S. representative of the Inter-Allied Military Mission.  On October 5th, in 1919, the treasures in the Hungarian National Museum were in danger from looting by foreign troops.  Armed with a riding crop and a quick wit, Major General Bandholtz closed the museum, and placed an order over the door saying: “This door sealed by Order of the Inter-Allied Military Commission. H.H. Bandholtz, President of the Day, October 5th, 1919.”  Through his actions, the collections remained in Budapest.  Modestly, Major General Bandholtz said of his actions that “I simply carried out the instructions of my government as I understood them as an officer and gentleman of the United States Army.”

On October 17, 2019, Ambassador Cornstein participated in a ceremony in the garden of the Hungarian National Museum where a plaque was unveiled in memory of Major General Bandholtz. In his remarks, Ambassador Cornstein said that one cannot only remember but also learn from history.  He highlighted that now, as allies, Hungarians, Germans, Romanians all work together in NATO in order to make sure that wars do not happen again.

Earlier in October, Deputy Chief of Mission – at the time serving as Chargé – Marc Dillard and Defense Attaché Col. David Wiseman paid tribute to Major General Harry Hill Bandholtz with a wreath at his statue on Szabadság tér.