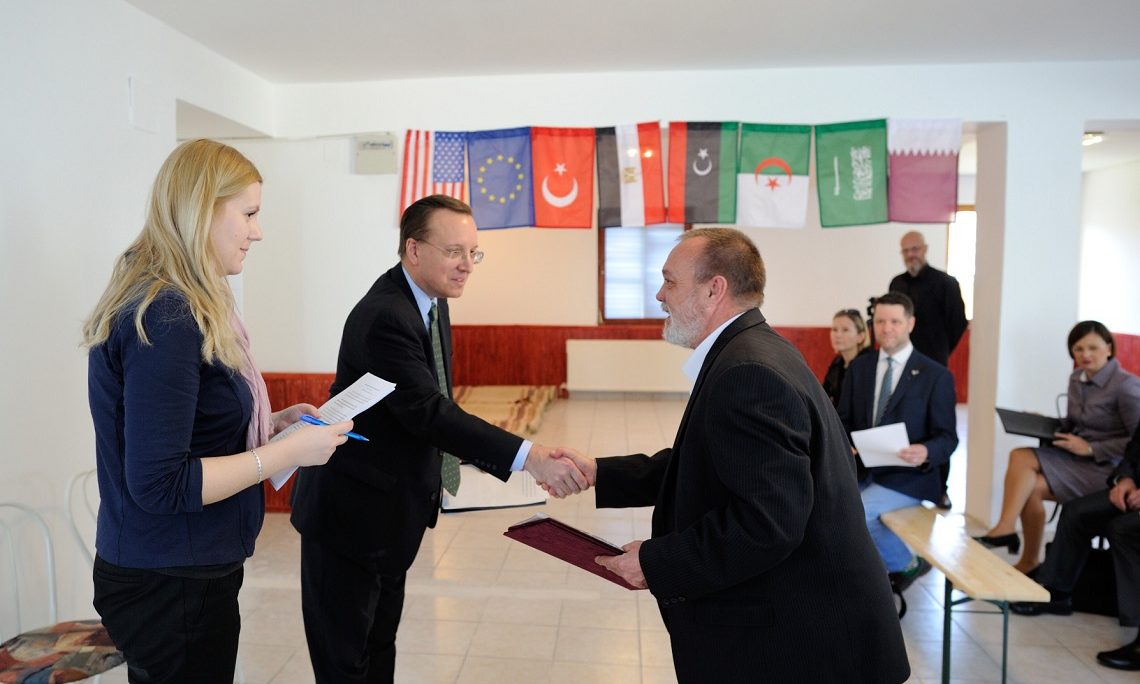 at the Opening Ceremony of the Gyula Germanus Islamic Cultural Center

Thank you to Mr. Bolek and the Hungarian Islamic Community for hosting this ceremony today, and for the honor of inviting me to participate in it with you.  Mr. Bolek, your Excellencies, distinguished guests, Assalamu alaykum [“Peace be with you” in Arabic; standard Muslim greeting worldwide].

I can’t tell you how pleased I was when I heard about the opening of this new Islamic cultural center, and then upon receiving your invitation, to have the opportunity to represent the embassy and the people of the United States at this milestone event.  I know that my predecessor, Ambassador Colleen Bell, had a special appreciation for the Hungarian Islamic Community and fostered a fruitful relationship with you.  I sincerely hope that my own relationship with you will engender that same warmth and mutual respect, and that our partnership will only strengthen.

The reason I was so pleased about the news of this cultural center is that I know how powerful ideas are, both good ideas, and, unfortunately, bad ideas.  I know that Muslims are a minority community in Hungary, and that they face some challenges as a result – despite having been an integral part of the country since its beginning.  I know that a woman wearing a headscarf is likely to attract a second look on a public street, or even to be threatened.  And Muslim men can face daily suspicions from their fellow citizens, targeted under the worst stereotypes as something completely different from who they really are.

We know this same situation all too well in my own country.  Take, for example, the pattern in the United States of news reports after a terrorist attack happens, of members of the Sikh religion being attacked, mistaken as Muslims, and stereotyped as supporting terrorism.  The layers of ignorance and fear run deep – in my country, as in yours, as throughout the human world.  This is the power of bad ideas.

What this cultural center represents, just like its namesake, Gyula Germanus, the great Hungarian Islamic scholar, is the pursuit of truth and the spread of good ideas.  Bad ideas come from lots of places, from images in the media to rival religious groups, and perhaps dangerously, from political leaders.  The power of bad ideas comes from peoples’ willingness to accept them and act on them, and this becomes more likely when there are no alternative ideas to be found.  That is why your Islamic cultural center is important.  Its purpose is to share good ideas with your fellow Hungarian brothers and sisters, ideas that can take root in the culture and serve as a powerful antibody to the bad ideas of fear, hatred, and prejudice.

I, and the rest of the staff of the American Embassy, stand side by side in solidarity with your quest to share your story with the world.  Thank you again for inviting us to share in the opening of this wonderful center, and may we always be the bearers of good ideas.  Köszönöm szépen and shukraan [“thank you” in Arabic].