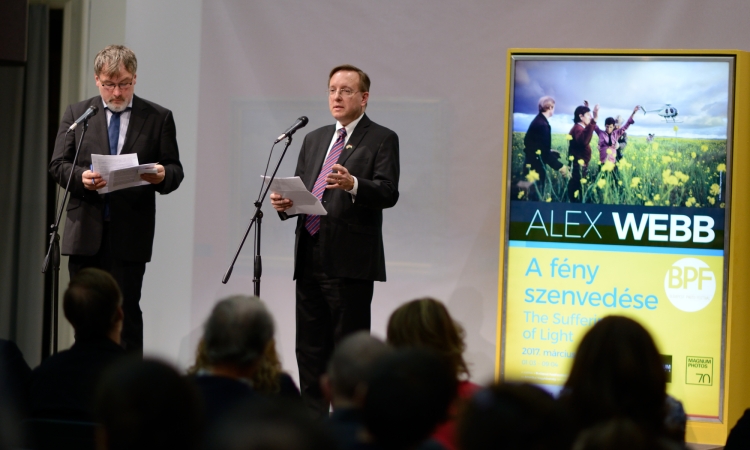 – as prepared for delivery –

Deputy Mayor Szalay-Bobrovniczky, Director Szegő, Director of the Budapest Photo Festival Mucsy, Curator for this exhibit and the Festival Ms. Szarka, and of course, our very special guest this evening, Mr. Alex Webb, Ladies and Gentlemen,

Jó estét kívánok!  Good evening!  It is my great pleasure to join in welcoming Mr. Webb to Hungary – his first visit here, I believe – and all of you to this exhibition of his works as part of this year’s exciting Budapest Photo Festival.

It is a great pleasure to join with our host for the evening, Director Szegő and everyone at the Műcsarnok, in cooperating with the Festival and helping to bring Mr. Webb’s photographs to Hungary.  I congratulate the Budapest Photo Festival organizers and the office of the Mayor for adding to Budapest’s long legacy as one of the world’s most vibrant capitals of photography and establishing this Festival, which ranks among the world’s best.  This year’s Festival will offer many opportunities to bring together local and international voices to reflect on the past, present, and future of photography at unique exhibitions, talks, workshops and educational events.

Today, photographs serve a variety of purposes, including portraiture, scientific research, travelogues, journalism, propaganda, and art.  With the rise of the digital and the cell phone cameras, we now regularly and immediately interact with our lives through photography, from shooting spontaneous selfies with friends to chronicling history as it unfolds.

The world owes a great debt to Hungarian photographers for their role in the development of photography into an integral aspect of both modern journalism and modern art.  Hungarian Robert Capa was the impetus behind the founding of Magnum Photos in 1947, a photographic collective that sought to explore the post-War world.  One of Mr. Capa’s partners, Henri Cartier-Bresson, described Magnum as “…a community of thought, a shared human quality, a curiosity about what is going on in the world, a respect for what is going on and a desire to transcribe it visually.”

The U.S. Embassy is proud to share in this community and in our shared human desire to explore the world around us.  Together with local institutions, we have hosted Fulbright scholars or American artists studying photography here.  This time last year, we visited the Műcsarnok’s exhibit of photographs by Steve McCurry, another Magnum member.  And in 2016, the Embassy partnered with Mai Mano House and the Robert Capa Center to display Associated Press archive photos documenting life after the 1956 Revolution in Hungary, which complemented a simultaneous exhibit of Mr. Capa’s photographs from the time of war.  In conjunction with Art Market Budapest, I had the honor to open an exhibition of photographs capturing the life of children in Europe after World War II taken by another of Magnum’s founders, David “Chim” Seymour.

And tonight, I am especially pleased to support the showing of works by a current American connection to that collective started 70 years ago by Mr. Capa and his colleagues – Mr. Alex Webb.

Since the 1970s, Mr. Webb — the pioneer of American color photography — has consistently created photographs characterized by intense color and light. His multi-layered works incorporated multiple styles, such as street photography, photojournalism, and fine art.  He composes the many facets of life, from movement to color, in single frames rich in mystery, humanity, and emotion.  The exhibit you’ll see tonight, The Suffering of Light, features previously unpublished photographs and offers the most thorough examination to date of where his curiosity has led him over the past thirty years.

In the tradition of Magnum Photos, Mr. Webb exhibits a strong interest in our world and often focuses on rural areas, borders, or less frequently visited destinations.  His pictures tackle timely issues, such as the situation along the U.S.-Mexican border and the issue of economic migration, in a timeless way.  His works carefully depict the attitudes and realities of his subjects and offer a great example of contemporary American photography.

Photography’s rich, though relatively short, role in capturing events, people and emotions will no doubt continue to evolve and change as our world and our technology grows and changes in ways that will surprise and challenge us.  The Budapest Photo Festival allows us all to participate first-hand in this dynamic energy and I look forward to seeing more exhibits before the Festival ends in late April.  I also encourage Hungarians to visit and viewThe Suffering of Light, learn more about contemporary American photography, and most importantly, discuss the issues these pictures present and perhaps consider a new perspectives on the people, events, issues, and personalities that shape our shared planet today.

Thank you and enjoy the exhibit.