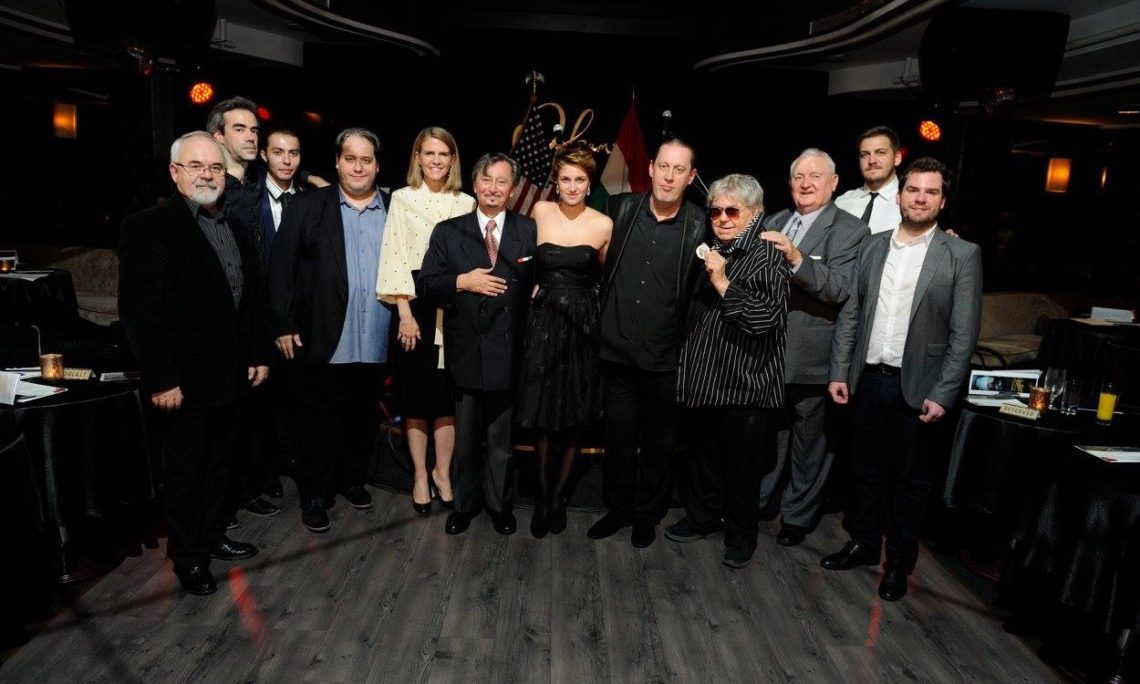 Jó estét kivánok!; Welcome to what I’m sure is going to be a truly wonderful evening, full of good friends and good music!  I’m so glad that we can gather here in this beautiful jazz club this evening.  As they say in Hungary, “Sok jó ember, kis helyen is elfér!” [Good company makes even a small space cozy!]

On this chilly Autumn night, we gather to remember the fire that burned in the hearts of Hungarians 60 years ago, a desire for freedom and democratic rule.  On October 23, they took to the streets to raise their voices and demand democracy and independence.  And their voices were silenced, with violent attacks and arrests.

Tonight, in their memory, we’re going to fill this space with music, specifically jazz music.  Jazz great Duke Ellington once said, “Put it this way: Jazz is a good barometer of freedom… In its beginnings, the United States of America spawned certain ideals of freedom and independence through which, eventually, jazz was evolved, and the music is so free that many people say it is the only unhampered, unhindered expression of complete freedom yet produced in this country.”

This concert was inspired by brave Hungarian musicians who – in 1956 — expressed their desire for freedom through jazz.  I first heard about their recordings from Mr. Attila Csányi, the late deputy-editor of Jazz Todaymagazine – whose wife Mrs. Csányi and family are here tonight — who told me how the Embassy supported local musicians’ jazz recordings at a time when such Western influences were banned.

Tonight, we have the honor being joined by two of those musicians, Mr. Ferenc Ruttka and Mr. Ervin Vászondi.  It is an amazing honor to meet two men – talented artists and patriots.  Please join me in welcoming them and recognizing their determination, courage, and passion.  Their achievement has stood the test of time; it is something we celebrate today, 60 years later, and will continue to celebrate for years to come.

The Embassy passed their music to Willis Conover, supporter of the Eastern Bloc jazz community and host of the Voice of America’s famous “Jazz Hour,” who aired them November 23, 1956.  He introduced the program by saying, “We don’t know whether the musicians who made this music are able to listen today, nor even where they may be as we broadcast their music, but here for the world is their living testimonial in the universal language of music.”

In addition, I would also like to recognize one of special performers this evening, Mr. Tommy Víg.  Mr. Víg, as a 1956er yourself, you personify the resilience of the Hungarian people, as well as the enduring personal and musical ties between the United States and Hungary.  I thank you for joining us here and contributing your talents to this commemoration.

Music truly does have the power to bridge political, cultural, language and generational differences with audiences around the world.   And Hungary has such always had a rich cultural scene and its own amazing musical legacy, include tonight’s Balázs Elemér Group!  It is such an honor that jazz — the multicultural music born out of America’s ideals of freedom and independence — could join this long tradition and serve as an instrument of democratic expression during this turbulent era of Hungary’s history.

During tonight’s concert, we celebrate those “barometers of freedom” – the Hungarian jazz musicians who played their music in 1956 in defiance of the Communist government.  And we remember all of the Hungarians who suffered and those who died in the fight for democracy 60 years ago.  The Embassy is proud to honor their enduring spirit of freedom through this music.  Please enjoy the evening.