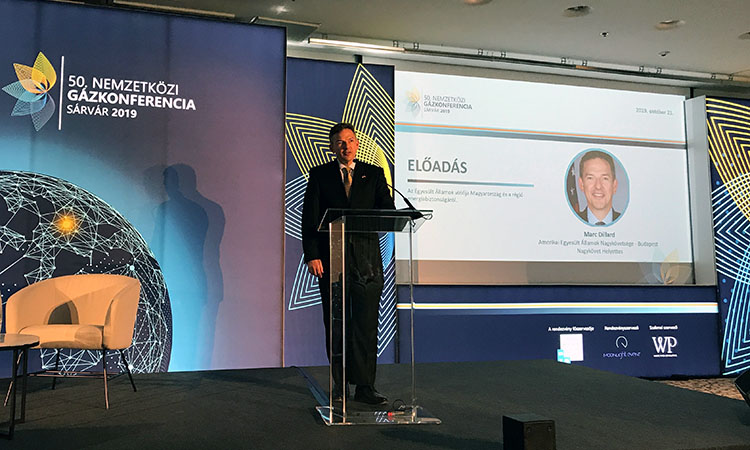 I am honored to be here today at the 50th International Gas Conference, and to speak about the importance of cooperation in advancing energy security.  The United States and Hungary are no strangers to energy cooperation, with a history dating back nearly 85 years.  In fact, some of the first commercial-scale oil and gas wells in Hungary were drilled by the American company Standard Oil.  In 1935, one of those first wells was drilled in Mihályi, just a half-hour drive north of where we sit today.  That was a game-changer, and three years later the Hungarian-American Oil Company was founded, helping Hungary meet its oil needs within just two years.  Today, U.S. firms continue the proud tradition of working closely with Hungary and Hungarian firms to realize the potential of its domestic natural gas resources.  And the United States government remains committed to developing new projects and technologies to increase energy security in Hungary and across Europe.  The question is: How do we change the game today?

By now we all understand very well that economic security is national security.  And that energy security establishes a foundation for continued growth and prosperity, and it protects a country’s sovereignty and ability to protect its own interests. In today’s world, in which certain energy suppliers have shown their willingness to use energy as a political and economic weapon, that matters now more than ever.  It is critical that those of us who value open, competitive energy markets make it clear that such tactics are unacceptable.  But, we can also take care of ourselves, by taking advantage of the changes we are witnessing in the energy sector.

To understand why the next decade will matter so much, it’s important to take stock of the innovation in the energy sector which has led to new possibilities in energy production and trade that were unimaginable just 10 years ago.  New drilling technologies, the shale gas revolution, renewables, and much more have changed not just what sources we use, but how we understand energy security.  These technologies have enabled the United States to become the world’s largest energy producer, which means that we’re not dependent on any single other country for our oil and gas.  This new world of energy technologies has reshaped not just how the United States looks at energy security, but the views of other NATO and Western allies as well.

Perhaps the most important lesson for all of us has been that energy security starts with energy diversification – that is, diversification of not just routes but sources, i.e., energy supplies by country of origin and fuel types, including renewables.  Any first-year economics student knows that depending on one source puts you at the mercy of the seller, increasing the potential for monopolistic and malign behavior.  So as we discuss the importance of energy cooperation and security in this region, we should look closely at two prominent opportunities: Black Sea offshore gas and the Krk LNG terminal.  Both would add to the diversity of energy supplies for Hungary and the region.

Let me talk about the two opportunities.

The United States continues to strongly support the development of Black Sea gas projects to benefit the entire region.  As President Trump emphasized in a joint statement with Romanian President Klaus Iohannis on August 20, Black Sea gas has the potential to improve Europe’s energy security, and the United States will continue to work with Romania to improve the energy investment climate.

We understand that there have been difficulties and setbacks in developing Romania’s offshore gas.  But we still believe that the gas from the Neptun Deep field could represent significant, positive change for energy security in the Central European region, and for reducing unhelpful dependencies on Russia.

We hope to see Romanian gas flowing into Hungary, among other countries, in the coming years and think that the gas trade will be to the benefit of the entire region.  We hope that Hungary and Romania can build upon the good work that has already been done in connecting the pipeline infrastructure between the two countries.  Just earlier this month, for example, FGSz inaugurated the Hungarian section of the Romanian-Hungarian pipeline, a great first step in regional interconnection.  Working together, we can accomplish much more.

LNG will continue to play a critical role in Europe’s quest for greater energy security.  And we are happy to see a U.S. LNG company like Tellurian represented by Anita Orban at this conference here this week.  President Trump recently highlighted the United States’ transformation into an energy exporter – noting that U.S. LNG exports to the EU reached an all-time high in March 2019.  And the EU hopes to double its imports of U.S. LNG by 2023.  This will make Europe stronger, and it will make the transatlantic economic and security partnership stronger.

We can already see how LNG has reshaped energy security in the region.  We can look to our NATO Ally Poland as a success story.  Recognizing the dangers of depending too much on one source of energy, the Polish government made diversifying gas supplies a national security priority and has taken significant steps to make sure that they are not tied to one country’s energy exports.  NATO Ally Lithuania offers another example.  In January 2015, Lithuania opened a self-financed floating LNG import terminal.  The terminal provided the first means for a non-Russian supply of natural gas to the Baltic states, resulting in Gazprom cutting the price of Lithuania’s supply contract by 20%.  As of June this year, approximately 96% of the gas purchased by Lithuanian consumers came from the LNG terminal.  This is a transformation – What changed the game?  Poland’s and Lithuania’s successes both required significant investments, which in fact represent an investment in their national security and economic future.  That kind of commitment takes long-range vision, and the United States will stand with our allies as they take the far-sighted steps needed to break malign monopolies.

And so in moving forward, that means evaluating energy supply partners and infrastructure ideas not only in commercial terms, but also in terms of national security.  This is a chicken and egg problem of sorts.  In order for a country to have choice about its source of energy, it requires that it has infrastructure that facilitates the supply from multiple partners.  But in order to have the infrastructure, a government must make some difficult choices.  In short, investing in energy security requires vision and a commitment to the Krk Island and Black Sea projects – both of which we hope will also help Central Europe and the Western Balkans diversify their own gas sources.  The United States and the EU have supported this project for years to help the region diversify its energy supplies, long before U.S. LNG exports were even a possibility.  We are happy to see recent progress in making this LNG port a reality.

In summary, we have seen then that the past decade brought enormous change to the energy sector, and allies who have changed the game for themselves, increasing their options, making their energy sectors more adaptable and resilient.  Those examples offer an important lesson to any country contemplating whether to enter into a new long-term energy contract with a counterpart known for using oil and gas as a political tool.  Many gas deals are commercial, but for something as important as energy – the power that keeps the lights on, factories running, and our homes warm – there is also a national security element involved. It is not just the “price per bcm” that matters.  As Ambassador Cornstein has said, shopping around for a good price makes sense, but remember to factor in all the real costs — to your independence and your security — as well.

That is why it is important to remain flexible in terms of both timing and delivery. In the short-term, flexible gas contracts that don’t shackle a country into a long-term deal provide the most energy security.   The more flexible a contract is, the greater chance a country has to diversify its gas imports going forward – a crucial step in keeping its options open to increase its energy security.  In a world where the energy sector continues to transform quickly, we do not want to see any of our allies’ energy markets closed off to new potential sources of gas because they signed contracts that tie them to one source for a decade or longer.  Restrictive long-term contracts will give way to more transparent, more market-based gas trading – the model that we have in the United States and one that has done well to lower prices through increased competition.

There remains much hard work to do on both sides of the Atlantic to further strengthen our security and economic ties.  We have seen some important success stories in Europe, and I hope to see more of these kinds of successes in Hungary and the region during my three years in this country – hopefully to include the Neptun Deep and the Krk LNG projects.  It turns out the secret to energy security is not a secret: it just requires a commitment to invest in diversification and to preserve flexibility in order to break away from monopoly situations.  That doesn’t mean it’s easy or cheap, I know.  That’s why the United States stands ready to partner with Hungary – and all our allies and friends – to help make energy security an energy reality.