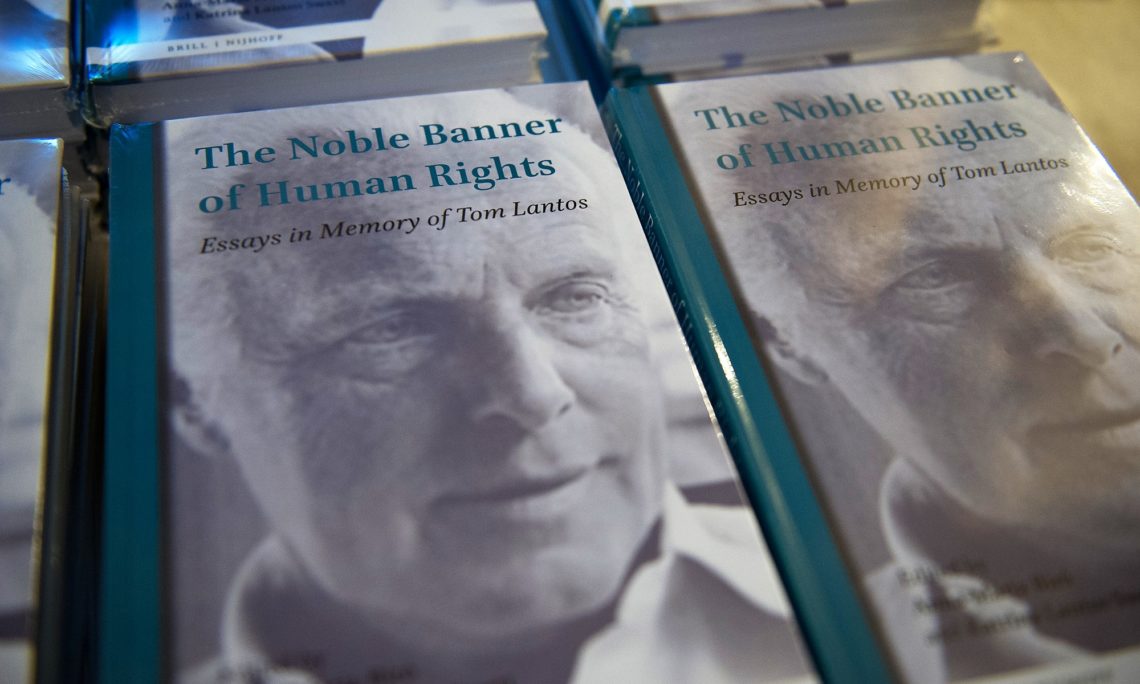 I am honored to be here tonight to once again honor the life of Tom Lantos and to celebrate the connection between the United States and Hungary that he, and all of us, so deeply cherish. The Noble Banner of Human Rights – Essays in Memory of Tom Lantos is a really wonderful collection of articles that shows Tom’s passion for human rights issues, including religious freedom and minority rights, among many others. Tom earned respect for this from across the political spectrum in the United States.

Last year at the memorial event to inaugurate the statue to Tom in the 13th district, we heard from former Vice President Biden about what Tom meant to him.  Our current vice president, Mike Pence, said in 2008 that Tom Lantos was a:

“giant in Congress … who stood on the world stage with moral clarity and courage.”

This “moral clarity and courage” guided many others along the way, from the time Tom was first elected to Congress in 1980 all the way through his 14th election to a seat in the House of Representatives in 2006. But his commitment and perseverance didn’t go away with his passing in 2008.  On the contrary.  His legacy has only grown with time and, now in 2019, we see today a further understanding – and appreciation – of the impact, influence and importance of his life’s work.

Congressman Lantos often spoke of the fragile nature of our existence and the need to stay vigilant in protecting it.  He said:

“The veneer of civilization is paper thin.  We are its guardians, and we can never rest.”

These words are so powerful, in fact, that they have become the overarching mission of the Tom Lantos Institute.

I am certain that he would have been proud of the excellent work of the Institute, of its focus on Jewish life and anti-Semitism, Roma rights and citizenship, as well as the rights of Hungarian minorities.  We are especially grateful for the Institute’s partnership with private individuals from the United States and throughout Hungary, people-to-people, they only way true partnership can be built.

The people of Budapest came together recently for Holocaust Remembrance Day on January 27 and I think that it’s appropriate to think about the work and life of Tom Lantos when reflecting on the Holocaust and Hungary. From the time he was just a child, right here in Budapest, Tom experienced hardships and persecution.  Through his struggles and perseverance, however, he was able to survive that time, escape, and make it to the United States, where he settled in California.

As an American, I am proud to say that he soon became a strong contributor to and defender of our country’s fundamental ideals and beliefs.  His moral authority was never questioned, as he was the only Holocaust survivor to be elected to Congress.  The fruits of his labor, including the establishment of the Congressional Human Rights Caucus continue to enrich our world to this day.  We would do well to recall his many years as Chair of the House Foreign Affairs Committee, his voice reminding us of our commitments and responsibilities to ensure people everywhere can speak, meet, teach, and live in peace and freedom.

Tom Lantos was a tireless defender of the human spirit, whether in his birthplace of Budapest or his chosen home of California.  He was a proud Hungarian and American, and a contributor to the strong ties that exist between our countries. We can also be thankful to Tom for the contributions of his family, including his wife, daughters, grandchildren and great grandchildren.  I know that they all stand – as we all should – for the protection of the dignity of every human being.

Dr. Swett and Ms. Biro – I applaud your initiative in assembling these articles into this collection as a way of further sharing Tom’s legacy with audiences everywhere.

Thank you very much – köszönöm szépen!