Home Főoldal | News & Events | Remarks by Ambassador David B. Cornstein to Commemorate the 20th Anniversary of Hungary’s Accession to NATO 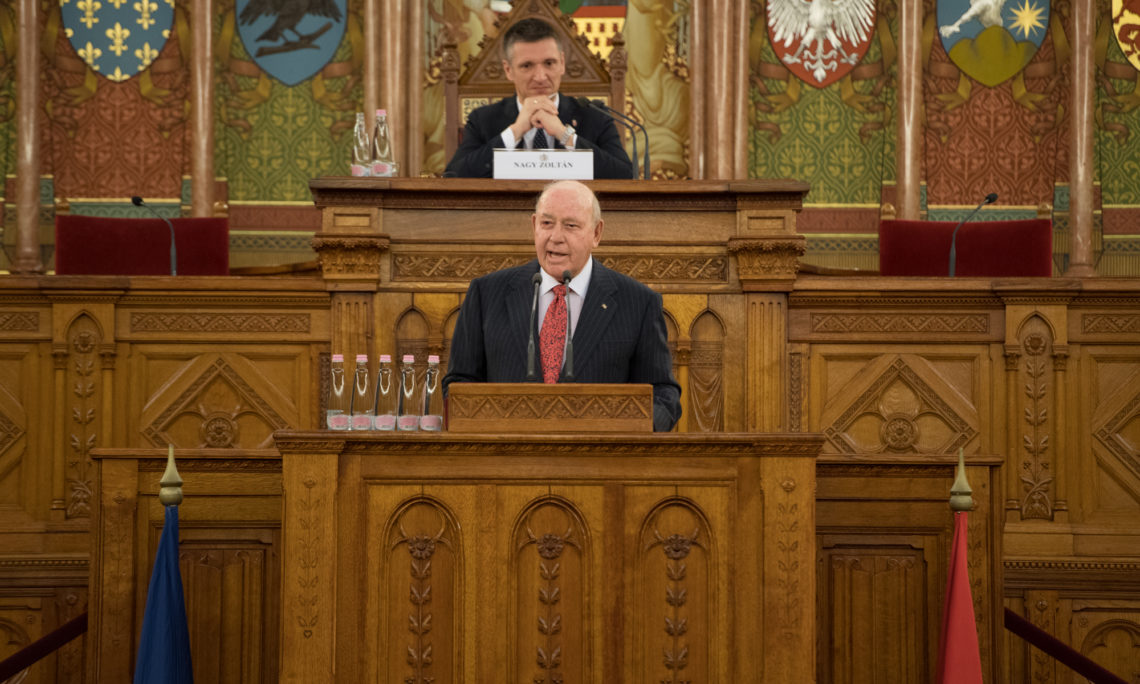 Remarks by Ambassador David B.  Cornstein to Commemorate the  20th Anniversary of Hungary’s Accession to NATO

Thank you Speaker Kövér and to all of the distinguished guests and panelists.

I am honored to join you today for this commemoration, and on behalf of the American people, I thank the Hungarian people for your friendship and partnership as Allies over the last 20 years.  I am committed to making this partnership even stronger, and I am confident that it will grow as we move forward together.

One of the many things I admire about the Hungarian people is your deep awareness of your history and your commitment to remembering the formative events of your past.  I know that later this week you will celebrate the memory of your brave ancestors who heeded the call for freedom and liberty in 1848.

Our presence here today is also about remembering some important events for Hungary—events that are again rooted in your enduring desire for freedom and liberty.

30 years ago, the Hungarian people—and many of your neighbors across Central and Eastern Europe— chose to end the darkness of communism and pursue a path of liberty, free from government control over what you say, how you worship, the way you make a living, and where you travel.

20 years ago, Hungary chose to defend and solidify the choice for liberty by joining NATO, after 85% of Hungarians who participated in a national referendum said yes to joining the alliance.

We recognize that the last 30 years have not been without hardship and challenge, but there is no doubt that these events were “wins” for Hungary.  Hungarians are safer, freer, more prosperous, and have more opportunities because of these choices.

And the United States and other NATO members are better and stronger because we have Hungary as an ally.

The Hungarian government has clearly honored the will of its people by taking an active and committed role in NATO over the last 20 years.  To cite just a few examples:

Hungary is also strengthening its bilateral security relationships with NATO members.  I am pleased that we’ve been able to conclude negotiations for a new Defense Cooperation Agreement between the United States and Hungary, which will bring our security cooperation into the 21st century and prepare us for the challenges that we face together as allies.  I look forward to signing the final agreement soon.

These contributions demonstrate Hungary’s commitment to the NATO alliance, and the Hungarian people are rightly proud of this work and remain highly supportive of NATO, based on the public opinion research that we see.

We cannot take for granted the benefits that flow from the important choices that Hungarians made which led to the pivotal changes in 1989 and 1999.

There are more choices ahead.

I’ve heard some remark that Russia is not a military threat to Hungary, because the two countries don’t share a border.  However, in today’s world, it’s a mistake to think only in terms of tanks crossing a border.  All NATO members face aggressive cyber security threats and misinformation campaigns from Russia designed to destabilize us, weaken our unity, and disrupt our democratic processes.

Moreover, Hungary does share a border with Ukraine, a country that faces the full brunt of Russian aggression on a daily basis, from cyber attacks and rampant misinformation campaigns to violent provocations and outright conventional warfare.  Already more than 10,000 Ukrainians have lost their lives and 1.6 million Ukrainians have been driven from their homes.  A close and high-level NATO relationship with Kyiv is in every ally’s interest.

As Secretary of State Pompeo said during his historic visit here last month,

“Central Europeans should be under no illusions about Putin’s intentions.  An authoritarian Russia is not interested in the freedom and sovereignty of smaller nations.”

We must resist the Kremlin’s cynical attempts sow discord in our alliance, whether it is through disinformation campaigns or attempts to mimic Western institutions to buy influence in the region.  Even the best of allies will occasionally have disagreements, but we cannot lose sight of what makes us strong—our unity as NATO allies.

China does not share a border with anyone in NATO, and yet it also threatens freedom in the region.  Like Russia, it is an authoritarian power that does not share the aspirations of freedom embodied in NATO, and it will use its economic power to subvert the rule of law and achieve political power.  The United States has made no secret about its concerns over the role certain suppliers may play in our growing telecom networks.  It is absolutely vital that every NATO member ensure that the networks we use to share sensitive security and defense information are secure.

And we’ve all witnessed the threat from terrorism, in the United States, in Europe, and in many other places.  Following the devastating terrorist attacks of September 11, NATO invoked its Article 5 collective defense provision for the first time.  We will never forget that Hungary, as one of NATO’s newest members, voted to stand with the United States in that decision.  Terrorism remains a threat, and as allies we must stay unified and vigilant.

NATO as a whole is celebrating its 70th anniversary this year, and it is without a doubt the most powerful and successful military alliance in world history.  No other institution or country or geopolitical power can offer the security and respect for sovereignty and personal liberty that NATO offers.  Just as the United States was surrounded by allies in the difficult and painful aftermath of September 11, Hungary can also rest assured that, as a NATO member, it too will never stand alone in its defense.

NATO is a win for all of us, and we are honored to stand with you and work with you as we continue to strengthen it for the future.