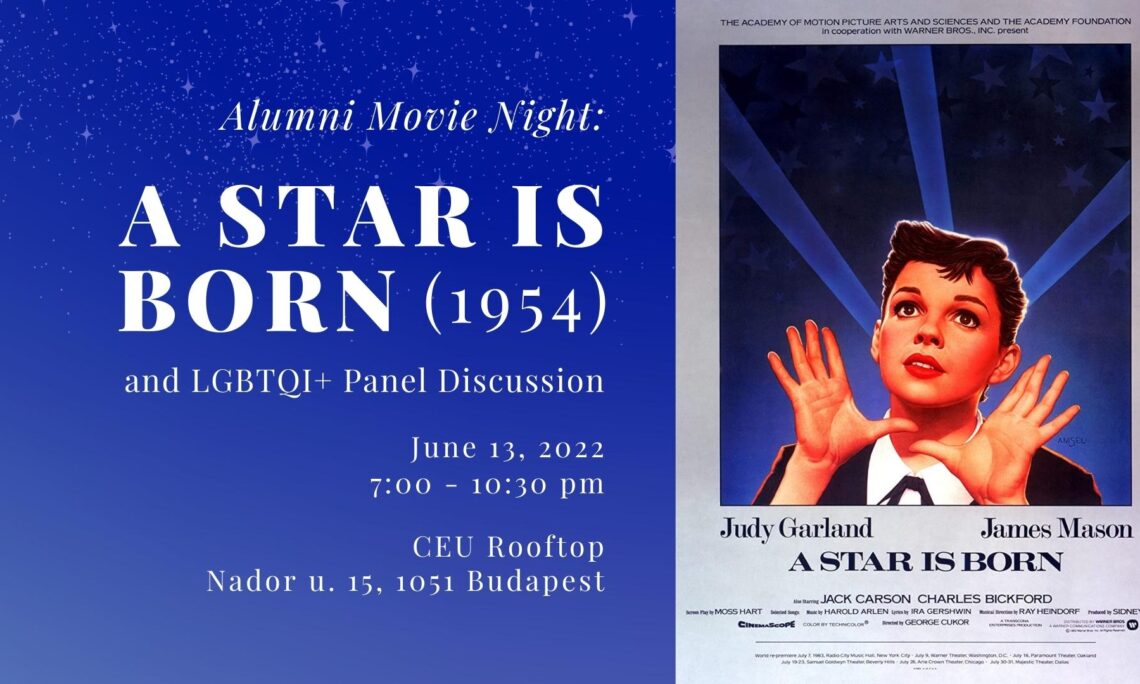 U.S. Embassy Budapest cordially invites you to the next session of our Alumni Movie Nights at the CEU Rooftop on June 13, 2022. Join us for an open-air screening of the 1954 version of A Star is Born – directed by legendary Hungarian director George Cukor, starring Judy Garland and James Mason – and the related panel discussion before the movie.
Judy Garland, whose 100th birthday will be celebrated on June 10, was revered as an icon by many in the LGBTQI+ community. The iconic rainbow flag is believed by some to be referencing her song “Somewhere Over the Rainbow” which she sang in one of her her most famous roles as Dorothy in The Wizard of Oz. Her death came the week before the Stonewall Riots, which are remembered every June during Pride Month. It was an open secret in Hollywood that director George Cukor was gay, although he was discreet about his sexual orientation.
Moderated by Cultural Attaché Shawn Kobb, the panel discussion before the movie will focus on the film – which has had two remakes since then, the most recent one being the 2018 version with Lady Gaga and Bradley Cooper –, LGBTQI+ issues and Pride Month, and Hollywood-Hungary connections.
Confirmed panelists include:
The language of the panel discussion will be English. The movie will be screened in English with English subtitles.
Panel discussion: 7:00 – 8:00 pm
Movie screening: 8:00 – 10:30 pm
Venue: CEU Rooftop, Nador u.15, 1051 Budapest
REGISTRATION IS REQUIRED VIA EMAIL BY JUNE 10: exchangealumni@usembassy.hu
We reserve the rights to modify the plans.