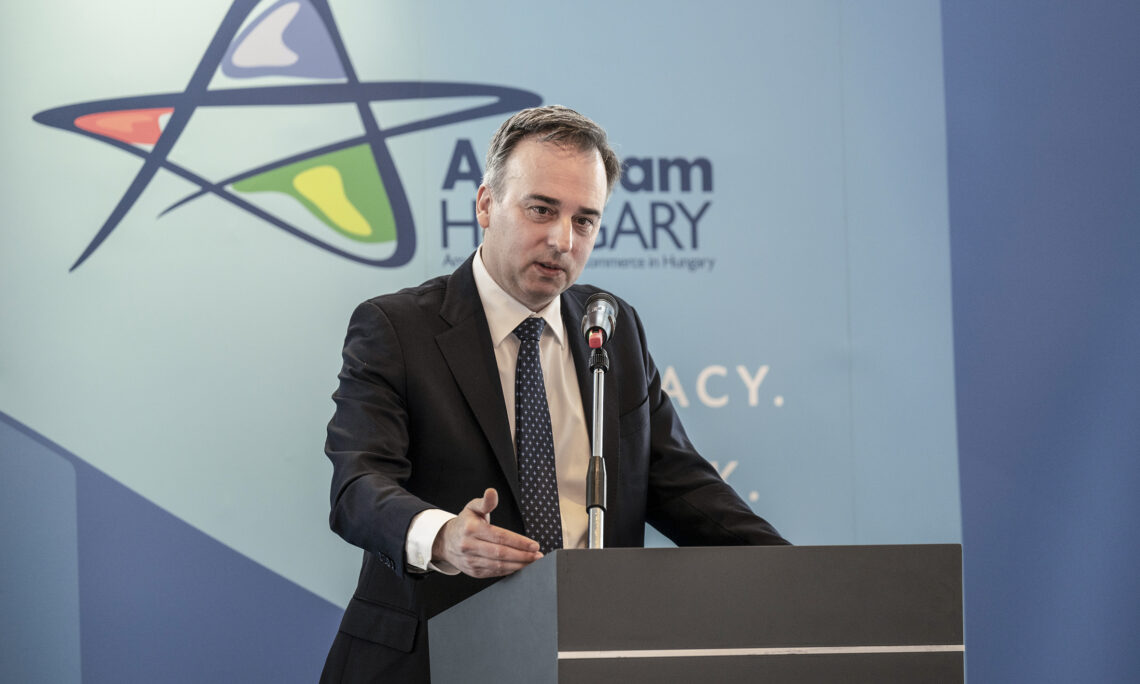 It is wonderful to be with you this morning and I appreciate the opportunity to speak about the important economic partnership between the United States and Hungary.

Thank you, Zoltan and Irisz, for hosting today’s event and for AmCham being such a valued partner of the U.S. Embassy.  Your work is critical and it is deeply appreciated.

With more than 100 years of bilateral relations, the U.S. – Hungarian relationship is both long and enduring.  There are bright spots in our relations including our security cooperation and, as many in this room can attest, our trade partnership is strong.

One needn’t look further than this government’s active direct partisan political campaigning during U.S. domestic elections to realize there are challenges.  There’s a reason allies don’t do this – partisanship  (definitionally) is not a basis for a stable bilateral relationship.

To be clear, this is not about conservative policies or liberal policies.  It is about preserving the vitality and health of a bilateral relationship between two nations.

We care about this partnership and this relationship.  And we have work to do to protect it.

I am heartened that in my many conversations with senior government officials in Hungary, they have committed to working with me to improve this dynamic.  To a person, they agree that the politicization and partisanization of our relationship is counterproductive.  But now is the time to move those commitments into action.

Now, I realize this is a very intense moment in the region and the world.  There is literally a land war at Hungary’s border.  With soaring inflation, a weakening currency, and a spike in utility costs, the economic situation in Hungary is under negative pressure.  These times call for unity of purpose and resolve.

We must stand up to Vladimir Putin, his war of choice, and the war crimes being committed by the Kremlin even as we gather here today.  Hungary cannot choose to sit this out.  The economic consequences of Putin’s war impact Hungary and the everyday lives Hungarians.

Yet, when I drive to work or come to this hotel, what I see are posters provocatively framing the enemy – the bomb-dropper – not as Putin but instead as quote “Brussels.”

Now, the United States is not a member of the European Union.

Hungary has voted for every sanction adopted by the European Union.

And yet Hungary is pointing the finger, not at Putin, but at the European Union, of which it is a member, and about policies for which it voted in favor.

Vladimir Putin’s unprovoked invasion of Ukraine – and its effort to literally decapitate a democratically elected government there – changed the reality of our world.  There is no going back to the status quo of the past.  Whether we like it or not, the world has changed.  So too must our policies.

Countries around the world have been forced to confront this difficult reality.  How do we support a democracy that is trying to break free from the shackles of Russian imperialism and defend its neighborhoods, its territory, and its children?

Do we speak up for justice, and back those words up with tangible support for Ukrainians fighting for their homeland? Or, do we parrot Kremlin talking points?

There is no room for hedging.  Perhaps this was possible in the past.  That is no longer true.  The world has changed.

Sanctions are not the cause of Hungary’s economic challenges.  Vladimir Putin is.

Sanctions ensure the international community does not finance Putin’s war.  Those who tell you that sanctions are not working are, at best, just wrong.

Since deciding to invade its neighbor, Russia has gone from being the 11th largest economy in the world, to not even in the top twenty.  Russia has defaulted on its sovereign debt for the first time in more than a century.  Its stock market has lost more than a third of its value.  Its ability to import goods from Western markets has evaporated.

Since Russia has been cut off from the global market, it has been forced to rely on military handouts from…North Korea.  Because of its isolation, Russia is reportedly cannibalizing semi-conductors and other hard to source parts from its civilian aircraft in order to restock its military supplies.    Reputable estimates describe hundreds of thousands of Russians voting with their feet and leaving the country since Putin’s war started.

Given the stakes, it is imperative we remain united in imposing costs on Putin.  And the fact that the costs being imposed on Putin are having a serious effect is why it is so concerning to see efforts to politicize the response through poster campaigns and national consultations.

“Brussels” is not to blame for high energy costs.  Vladimir Putin is.

I am an optimist.  And my optimism about the U.S-Hungary relationship is rooted in both the incredible talent of the Hungarian people and a shared conviction with this government that Hungary’s connection to the West is its strength and where its future lies.  Part of that connection is economic, but it is broader than that.  It is more fundamental.

However, our economic connections matter a great deal.  There is no denying the importance and the power of the economic partnership between our two countries.

There are more than 1,700 American businesses operating in Hungary.  These businesses provide jobs to more than 105,000 Hungarians.

The United States is the second largest investor in Hungary, and we are the number one export market outside the European Union.

Hungary is a destination for American investment.  With a strategic location in the heart of Europe, access to EU markets, a highly skilled and educated workforce, and solid infrastructure Hungary is well positioned to be an economic powerhouse.  It is why so many of the companies represented here today have set up shop in Hungary.  And why we want them to succeed, and are working hard for others to follow in their footsteps.

We see opportunities to build on this success.  And I am routinely contacted by the CEOs of major companies seeking our guidance on the investment and political environment in Hungary.  This relationship can deepen, it can grow, and it should.

Let’s make that our shared work even as the global economy is operating in conditions of high uncertainty.

Hungary’s trade balance has worsened, and its deficit has been increasing since 2020.  Energy prices have only increased since Russia’s unprovoked attack on Ukraine.

According to independent economists, the overall costs of energy prices will reach up to 10 percent of Hungary’s GDP this year.

This rise in energy prices has already led to the suspension of some community services, hotel and thermal bath closures for the winter, and a slowdown in some industrial activity.  Schools are stretching out their winter break to avoid heating their buildings, some are even closing sections of their campus, others are forced to reconcile sometimes conflicting guidance on lowering the thermostat to save money but also providing enough heat for the children.

The answer to these challenges is not in Moscow. There are other options, including in America.

Hungary should be seizing the opportunity to partner with trusted players in all of these fields.  It only makes sense.  Political sense.  Economic sense.  It makes a lot more sense than the current policy of tethering even more lines to Moscow.

Organizations such as AmCham have an important role to play in helping Hungary through this moment.  And I am pleased to hear that AmCham and business leaders in this room have been doing just that.

When the United States government and the private sector’s objectives align, when we speak with one voice, everyone is better off.  And AmCham is a great facilitator of this important collaboration and plays a critical role in our efforts to attract additional American investment to Hungary.

And so, I’d like to thank you, the members of AmCham, for supporting both the people of Hungary and the United States and for making this a good place to conduct business during this consequential moment.

We stand ready to work with you and our partners in the Hungarian government to ensure that the environment in Hungary is nurturing of our commercial and economic partnership.

The world is facing unprecedented challenges.  No country has been untouched by the economic and societal impact of the pandemic.  And, just as countries were struggling to manage that crisis, Vladimir Putin chose to shake the world order with his invasion of Ukraine.

We want to strengthen and improve Hungary’s relationship with the United States.

Less rancor, and greater care – for a relationship between friends. As that is what we are.

And that is what is needed to advance our shared long-term security and prosperity – and it is what we are working towards every day.

In closing, I would like to thank AmCham for its support.  We highly value our partnership and look forward to working together to build an ever-stronger climate in Hungary for business and an ever-stronger U.S. – Hungarian business relationship.