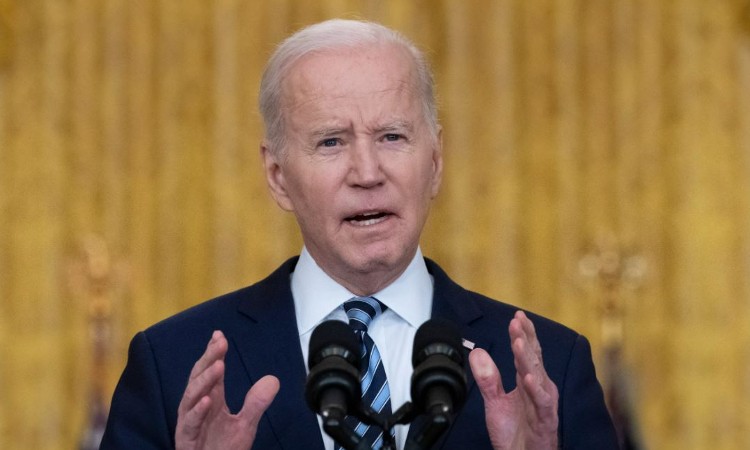 President Joe Biden speaks about the Russian invasion of Ukraine in the East Room of the White House, Thursday, Feb. 24, 2022, in Washington. (AP Photo/Alex Brandon)

THE PRESIDENT: Good afternoon. I want to begin by thanking President Zelenskyy for his passionate message this morning. I listened to it in the private residence, and he was convincing. And — significant speech.

I mean, it’s — it’s God awful. I was speaking about this with the — our — our Commander, behind me here — General Milley. I mean, it just is amazing.

Yesterday, we saw reports that Russian forces were holding hundreds of doctors and patients hostage in the largest hospital in Mariupol. These are atrocities. They’re an outrage to the world. And the world is united in our support for Ukraine and our determination to make Putin pay a very heavy price.

America is leading this effort, together with our Allies and partners, providing enormous levels of security and humanitarian assistance that we’re adding to today and we’re going to continue to do more in the days and weeks ahead.

We are crippling Putin’s economy with punishing sanctions that’s going to only grow more painful over time with the entire NATO and EU behind us, and many other countries.

What’s at stake here are the principles that the United States and the united nations across the world stand for. It’s about freedom. It’s about the right of people to determine their own future. It’s about making sure Ukraine never — will never be a victory for Putin, no matter what advances he makes on the battlefield.

The American people are answering President Zelenskyy’s call for more help, more weapons for Ukraine to defend itself, more tools to fight Russian aggression. And that’s what we’re doing.

In fact, we started our assistance to Ukraine before this war began, as they started to do exercises along the Ukrainian border — the Russians — starting in March of last year.

We took the threat of Putin invading very seriously, and we acted on it. We sent Ukraine more security assistance last year — $650 million in weapons, including anti-air and anti-armor equipment before the invasion — more than we had ever provided before. So when the invasion began, they already had in their hands the kinds of weapons they needed to counter Russian advances.

On Saturday, my administration authorized another $200 million to keep a steady flow of weapons and ammunition moving to Ukraine. Now I’m once again using my presidential authority to activate — to activate additional security assistance to continue to help Ukraine fend off Russia’s assault — an additional $800 million in assistance. That brings the total of new U.S. security assistance to Ukraine to $1 billion just this week. These are the lar- — these are direct transfers of equipment from our Department of Defense to the Ukrainian military to help them as they fight against this invasion.

And I thank the Congress for appropriating these funds.

This new package on its own is going to provide unprecedented assistance to Ukraine. It includes 800 anti-aircraft systems to make sure the Ukrainian military can continue to — can continue to stop the planes and helicopters that have been attacking their people and to defend their Ukrainian airspace.

And at the request of President Zelenskyy, we have identified and are helping Ukraine acquire additional longer-range anti-aircraft systems and the munitions for those systems.

It’ll include 7,000 small arms — machine guns, shotguns, grenade launchers — to equip the Ukrainians, including the brave women and men who are defending their cities as civilians, and they’re on the countryside as well. And we’re — and we — and as well as the ammunition, artillery, and mortar rounds to go with small arms — 20 million rounds in total. Twenty million rounds. And this will include drones, which — which demonstrates our commitment to sending our most cutting-edge systems to Ukraine for its defense.

And we’re not doing this alone. Our Allies and partners have stepped up to provide significant shipments of security assistance and will continue to help facilitate these deliveries as well.

The United States and our Allies and partners are fully committed to surging weapons of assistance to the Ukrainians. And more will be coming as we source additional stocks of equipment that are — that we’re ready to transfer.

Now — now, I want to be honest with you: This could be a long and difficult battle. But the American people will be steadfast in our support of the people of Ukraine in the face of Putin’s immoral, unethical attacks on civilian populations. We are united in our abhorrence of Putin’s depraved onslaught, and we’re going to continue to have their back as they fight for their freedom, their democracy, their very survival. And we’re going to give Ukraine the arms to fight and defend themselves through all the difficult days ahead.

We’re going to continue to mobilize humanitarian relief to support people within Ukraine and those who have been forced to flee Ukraine.

In just the past few weeks, we’ve provided $300 million in humanitarian assistance to the people in Ukraine and in neighboring countries. Tens of thousands of tons of food, water, medicine, and other basic supplies to support the people in need.

Our experts on the ground in Poland and Moldova and other neighboring countries are there to make real-time assessments of the rapidly evolving crisis and get urgently needed humanitarian supplies to the people in need when they need it.

And we will support Ukraine’s economy with direct financial assistance as well.

And together with our Allies and partners, we will keep up the pressure on Putin’s crumbling economy, isolating him on the global stage. That’s our goal: make Putin pay the price, weaken his position while strengthening the hand of the Ukrainians on the battlefield and at the negotiating table.

Together with our Allies and partners, we’re going to stay the course. And we’ll do everything we can to push for and end this tragic, unnecessary war. This is a struggle that pits the appetites of an autocrat against humankind’s desire to be free.

And let there be no doubt, no uncertainty, no question: America stands with the forces of freedom. We always have and we always will.

I want to thank you all. And God bless you. And now I’m going to walk over and sign this legisla- — sign this bill to allow the drawdown of those materials.

And may God protect the young Ukrainians who are out there defending their country.

What I’m signing here is the Delegation of Authority Under Section 506(a)(1) of the Foreign Assistance Act of 1961. Translated into plain English: a total of $800 million in defense articles.

(The Delegation of Authority is signed.)

Q Mr. President, what will it take for you to send the Polish MiGs that President Zelenskyy is asking for?