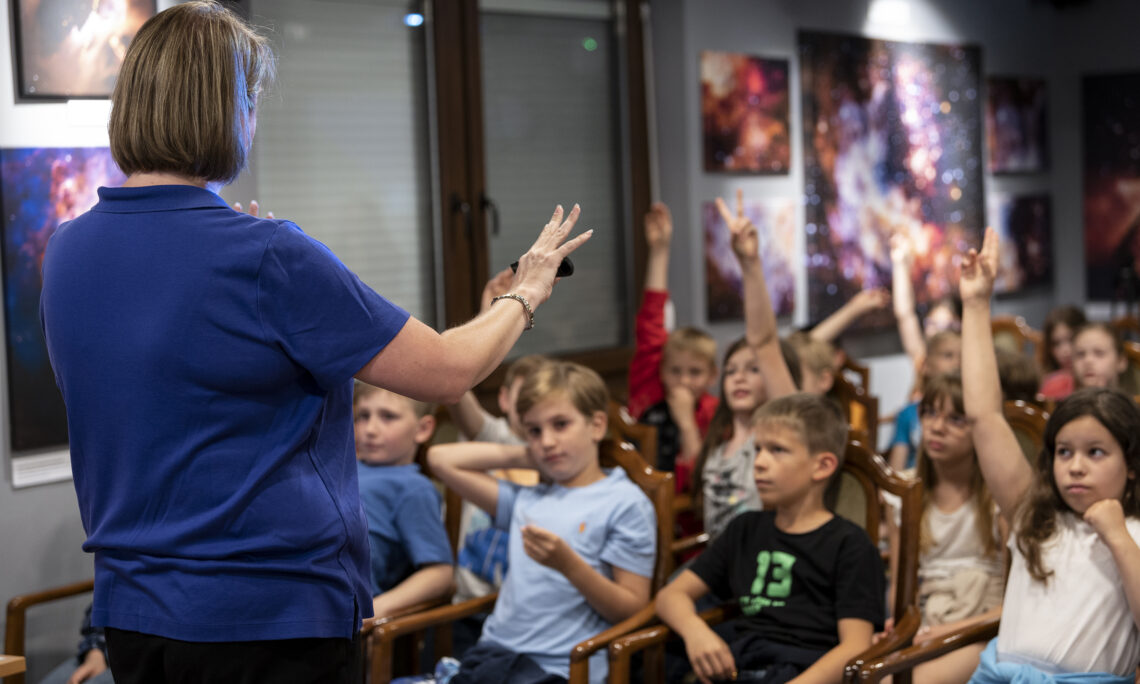 Who better to speak about the International Space Station, the U.S. Space Force, and space research than our two special guests from NASA (National Aeronautics and Space Administration)?  Norma Jennifer Knotts and Raphael A. Grau, and Lt. Col. Tiffany Rivera, Deputy Chief for the Office of Defense Cooperation at the U.S. Embassy in Budapest, visited the Svábhegyi Observatory in the morning and the Lóczy Lajos High School in Balatonfüred in the afternoon on May 26 to tell students about lunar rocks, the Apollo and Artemis missions, the planned Mars landing and other exciting topics related to space exploration.  More than one hundred young Hungarians enjoyed this special opportunity to hear directly from these experts on topics that are literally out of this world, and to ask questions about being in space and how people will one day go to Mars.

The NASA experts’ primary purpose to Hungary was to pick up the Apollo moon rock and return it to the United States.  The moon rock was temporarily loaned to Hungary in 2021 for an exhibition organized in collaboration with the US Embassy in Budapest, NASA and the Hungarian Museum of Natural History, and was designed to showcase the Apollo missions and current Hungarian space developments to a wider audience.  The focus was on the Apollo 17 mission lunar rock number 70215,41 collected during the Apollo 17 mission.

As NASA staff were visiting to return the moon rock, they offered a great opportunity to English-speaking students interested in the subject: a space presentation.  Hungarian children could learn first-hand about what NASA does and the importance of lunar rock samples for scientific research.  The students, who listened with sparkling eyes, could ask questions after the presentations. Participants in the program at Svábhegy were also able to look at the Sun from the Observatory’s large dome using the Institute’s special solar telescopes.

Lt. Col. Tiffany Rivera talked about the present and future of space exploration and space travel, its Hungarian implications, the dangers of space debris, and what the U.S. Space Force is all about.

Norma Jennifer Knotts, Public Affairs Officer at the Lyndon B. Johnson Space Center, told the children some very interesting facts about the Apollo program and its successor, the plans for the Artemis mission, and about the lunar rock sample itself, its collection and scientific significance.  She also showed exciting videos, which no doubt captured the imagination of the students.

Raphael A. Grau, Deputy Manager, International Space Station Program External Integration Office, talked mostly about the International Space Station, provoking an almost unstoppable tsunami of questions from the curious children.  Among other things, they wondered who had spent the most time on the space station so far, how long it would take to get to Mars and when this was expected to happen.  The presenter also showed a video message sent to the children personally, directly from space, by American astronaut Kjell Norwood Lindgren, to which the children could send a reply message!  Another highlight of the program was the opportunity for children to see and take photos of the moon rock collected during the Apollo 17 mission.  The last stop on the rock’s stay in Hungary was Balatonfüred.  With support from the American Corner in Veszprem, students of the Lóczy Lajos High School had the privilege to “meet the moon rock in person” and it was clearly a great success with the audience.

As the mission of the Svábhegyi Observatory is to communicate about astronomical research and science and to raise a generation of young physicist-astronomers, scientists were thrilled to have NASA representatives for the first time to enrich the life of the institute with educational activities.  Astronomical researchers at the Research Center for Astronomy and Earth Sciences, the parent institution of the Svábhegy Observatory, collaborate with NASA and other international space agencies on a number of projects.

While we can’t promise another NASA visit to Hungary in the near future, we have many excellent speakers with exciting topics.  As part of its Embassy on the Road outreach series, the U.S. Embassy offers a wide range of programs for high schools, universities and other local communities (student organizations, NGOs, etc.) on topics such as the environment, security cooperation, media awareness, diplomacy, international relations, etc.  If you would like to invite a US speaker, you can also send us your application online. Embassy on the Road programs are free of charge.