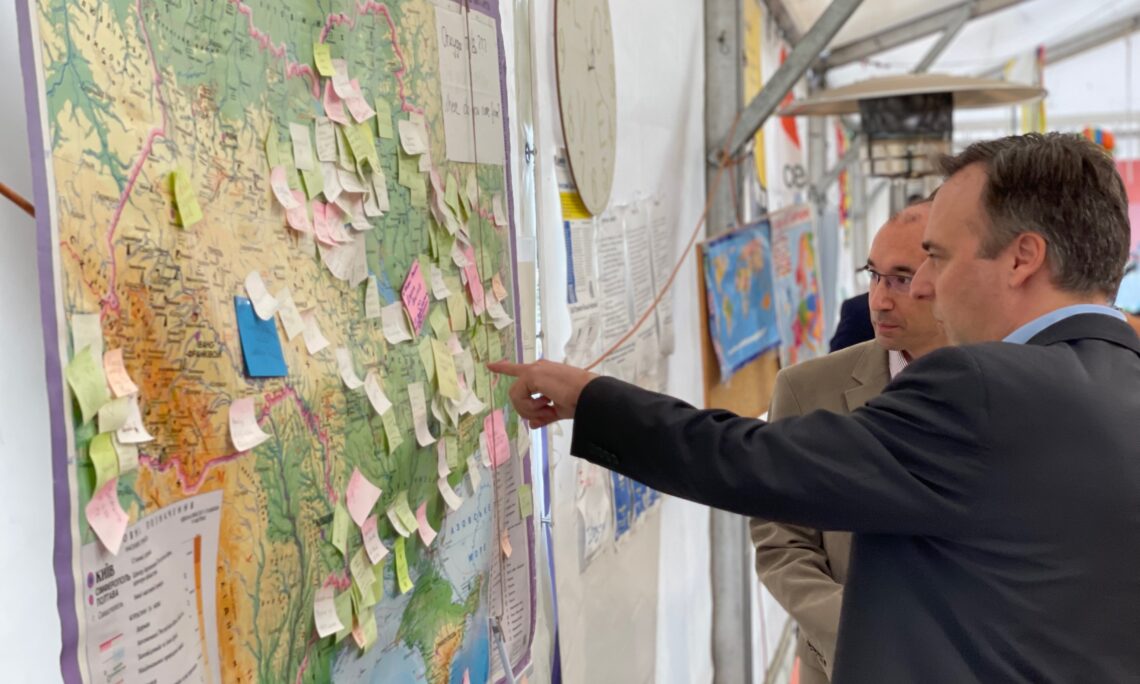 Embassy of the United States of America
Budapest, Hungary

Today during his first visit to the border region, newly arrived U.S. Ambassador-Designate to Hungary David Pressman traveled to the border towns of Záhony and Tuzsér in northeastern Hungary to observe conditions for refugees fleeing Russia’s brutal war in Ukraine.  He met with government and humanitarian actors to convey the United States’ appreciation and to understand their current needs and challenges.

Ambassador-Designate Pressman commended Mayor László Helmeczi of Záhony and Mayor Tibor Ferkovics of Tuzsér for their communities’ continued generosity and humanitarian support. He said: “We thank the Hungarian government and people for their generosity in ensuring the safety and well-being of refugees from Ukraine.”

During his visit, the Ambassador-Designate witnessed the arrival of individuals and families fleeing Ukraine through the Záhony train station.  He observed the services provided for new arrivals, as well as speaking with refugees currently living in temporary accommodation in the nearby town of Tuzsér.

U.S. contributions continue to support the needs of refugees and people displaced and in need in Ukraine.  The United States has provided nearly $340 million to date to complement the humanitarian support of the European Union and host governments in countries receiving and hosting millions of refugees, including more than $10 million in Hungary.

Ambassador-Designate Pressman also recognized the invaluable work of humanitarian organizations, saying: “The United States values its partnerships with UN agencies and other humanitarian actors to ensure assistance is delivered directly to the most vulnerable refugees, including those fleeing to neighboring countries like Hungary.”

Since the start of Russia’s February invasion of Ukraine, organizations like UNHCR, the Hungarian Red Cross, and the International Organization for Migration have worked alongside local authorities and community partners to provide critical assistance, including access to information and legal assistance, support to reception services, and provision of basic items for the most vulnerable.

Please find photos of the event at the link below. The photos can be used with the following attribution: U.S. Embassy Budapest.