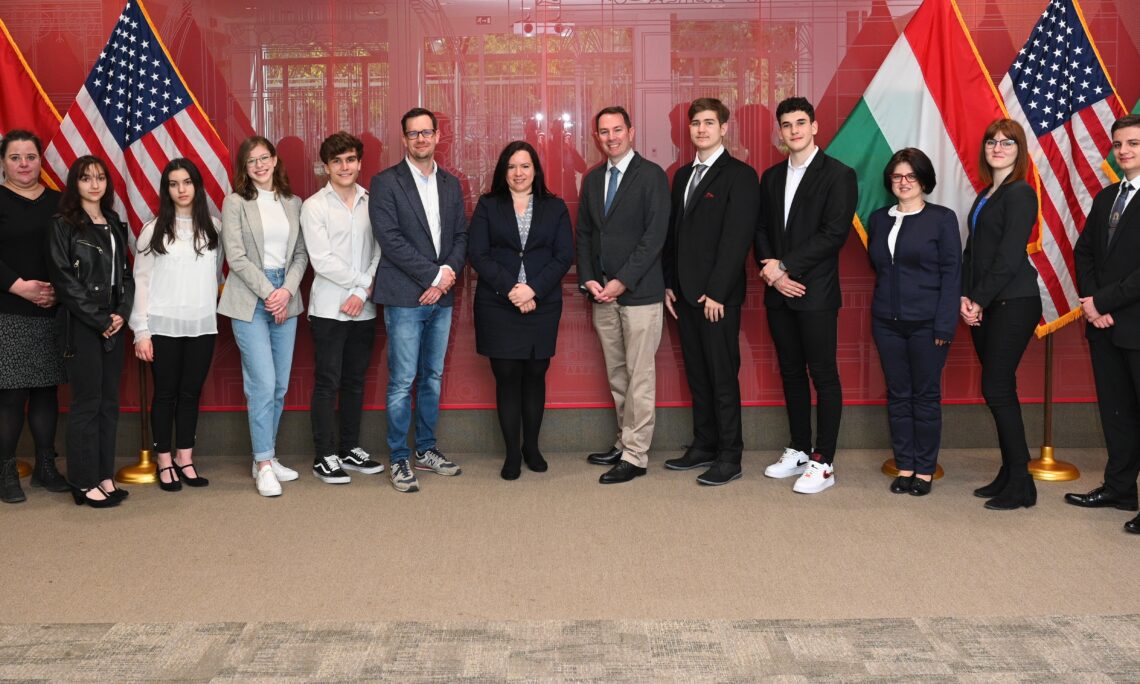 Congratulations to the participants of the 2021 National DEbate and Video Competition for high school students. Cultural Affairs Officer Shawn Kobb and Balazs Venkovits of the University of Debrecen presented certificates and gift bags to “Status Quo”, the winning team from Alternativ Kozgazdasagi Gimnazium, Budapest and the 1st and 2nd runners-up (Divine Angels, Revai Jozsef Reformatus Gimnazium, Miskolc and Took Dee Bate, Avasi Gimnazium, Miskolc) last week. The sixteen participating teams debated the motion whether it was a good idea to return the Holy Crown to Communist Hungary.

The debate’s topic was “The U.S. should not have returned the Holy Crown to Hungary in 1978 as it meant the legitimization of the Hungarian political system and its leaders.”
Watch the winning videos here:

DEbate, a national, English-language debate competition for high school students in Hungary, has been organized by the University of Debrecen’s Institute of English and American Studies since 2015. Students from all over the country (including not only Debrecen and Budapest but Sopron, Szolnok, Eger, Baja, Pécs and many other cities) have debated diverse topics in the Karl Popper format: the motions have ranged from the colonization of Mars and the usefulness of the universal basic income to the merits of peer-to-peer economy or the National Core Curriculum.

The organizers at the Institute of English and American Studies – Dr. Balázs Venkovits and Dr. Zsuzsanna Lénárt-Muszka –have cooperated with the U.S. Embassy Budapest and the American Corners as partners since the beginning and as co-organizers in the past 2 years.

In 2019, DEbaters put together creative projects addressing the regime change in the Hungarian cultural and historical mindset. In 2021, the competition honored the 100th anniversary of the establishment of U.S.-Hungarian diplomatic relations with the motion, “The U.S. should not have returned the Holy Crown to Hungary in 1978 as it meant the legitimization of the Hungarian political system and its leaders.”

Throughout the years, the organizing team has put together an e-learning course for educators, has published papers in academic journals and held conference talks on the methodology of teaching debating. We hope to continue an in-person competition series in the fall and help young students with honing their argumentative and critical thinking skills.