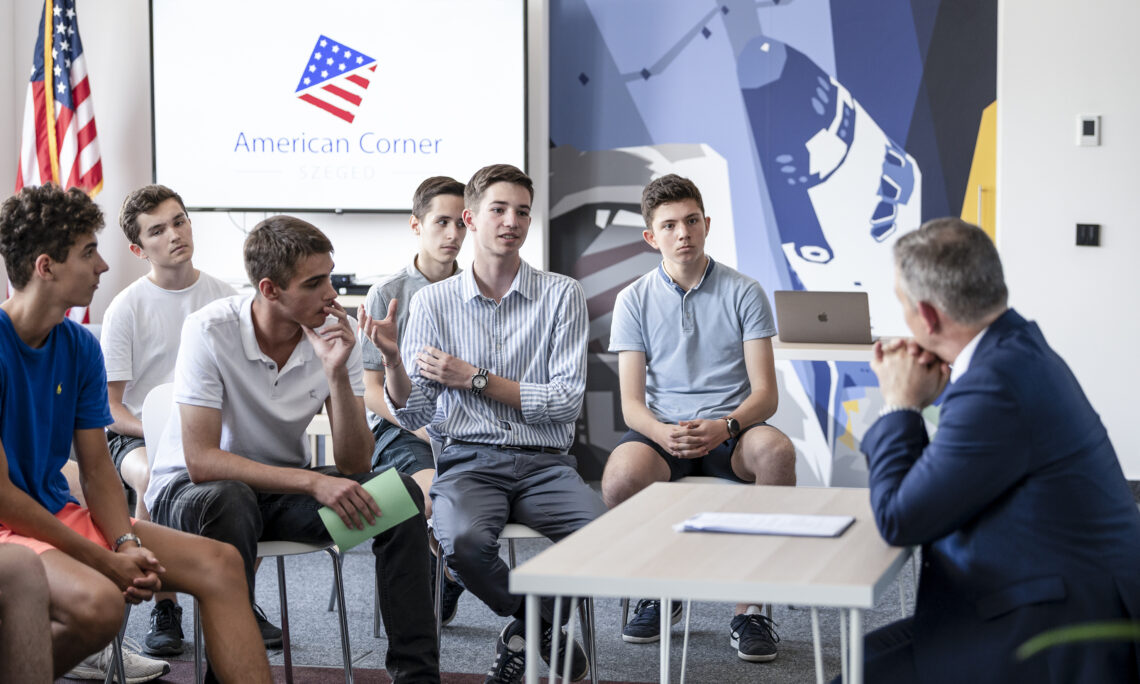 Visiting the “city of sunshine” on the Great Hungarian Plain, Embassy Chargé d’Affaires Marc Dillard spent the day in historic Szeged to meet with local leaders and take in the picturesque university town on the banks of the Tisza River. Mayor Botka discussed the city’s current successes and challenges, and some of the city’s development plans.  At the historic synagogue, built in 1902, Charge Dillard learned about the city’s rich Jewish history and citizens, including the architect who designed the synagogue, one of Europe’s largest, Lipot Baumhorn.

The American Corner Szeged welcomes anyone interested in learning more about the U.S., eager to practice English in preparation for the TOEFL test, or fine tune creative writing skills.  Charge Dillard took questions from an engaged audience of students after speaking about celebrating over a century of diplomatic relations between our countries, including on why he became a diplomat and what he most enjoys about living in Hungary, while encouraging the students to seize the opportunity to participate in US-based exchange programs.

Hungarians’ contributions to science are well-known, and at the Extreme Light Infrastructure Attosecond Light Pulse Source Research Center (ELI-ALPS), CDA Dillard saw firsthand how Hungarian researchers are advancing scientific knowledge of ultrahigh intensity light, a highly specialized area with applications in the fields of medical imaging and diagnostics, radiotherapy, or new materials.  The CDA highlighted the significance of international collaboration in scientific research and talked about the importance of sharing such a state-of-the-art scientific infrastructure across national states.