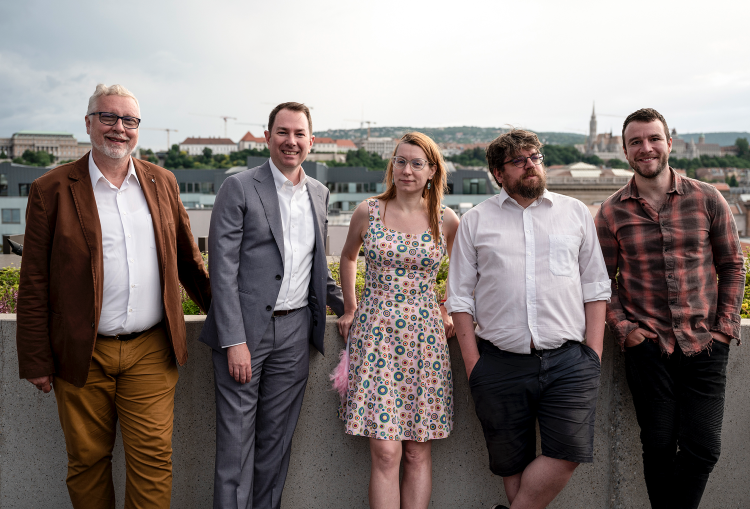 U.S. Embassy Budapest kicked off Pride Month in a grand way. Cultural Attaché Shawn Kobb moderated a panel discussion on LGBTQI+ issues and Hungary-Hollywood film connections on June 13 at the CEU Rooftop. The panelists – including International Visitor Leadership Program (IVLP) alumni Tamás Dombos from Háttér Society and Viktória Sulyok from the Hungarian Asexual Community, and IVLP Nominee Áron Molnár, actor and activist, founder of the noÁr movement – addressed the achievements and challenges of the LGBTQI+ community, and their personal motivations and successes, while panelist Ambassador Balázs Bokor, President of the Hungarian Hollywood Council, spoke about legendary Hungarian director, George Cukor, one of the many Hungarians who shaped the American film industry. Not only did we have fantastic views, but a rainbow also appeared on the sky, setting the tone of the night!

Following the panel, we watched George Cukor’s 1954 film “A Star is Born” as part of our Alumni Movie Nights. The movie stars Judy Garland whose 100th birthday was celebrated on June 10, 2022. Garland, who gave an Oscar-nominated performance in this movie, was revered as an icon by many in the LGBTQI+ community. The iconic rainbow flag is believed by some to be referencing her song “Somewhere Over the Rainbow” which she sang in one of her most famous roles as Dorothy in “The Wizard of Oz.” Her death came the week before the Stonewall Riots, which are remembered every June during Pride Month. It was an open secret in Hollywood that director George Cukor was gay, although he was discreet about his sexual orientation. “A Star is Born” has had two remakes since the 1954 version, the most recent one being the 2018 version with Lady Gaga and Bradley Cooper, which is a testimony to the eternal human emotions and conflicts the story revolves around.