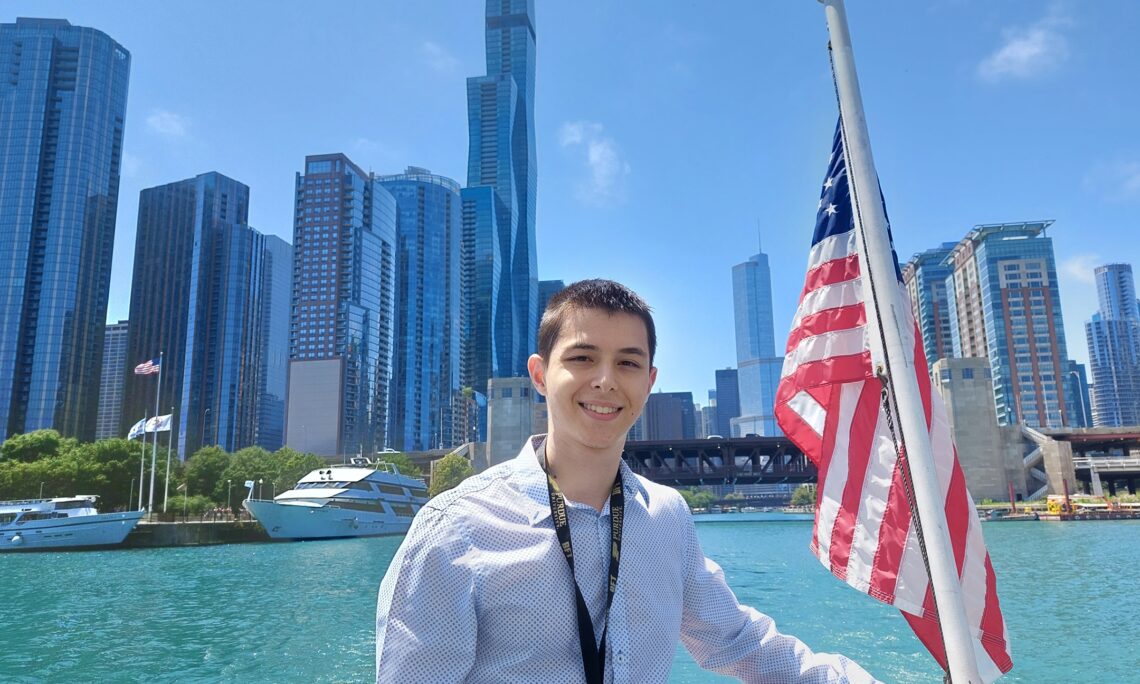 The first time I heard about the Benjamin Franklin Transatlantic Fellowship was at the Educatio Exhibition, at the stand of the U.S. Embassy Budapest. What immediately appealed to me about the program was the one-of-a-kind opportunity to spend four weeks in the U.S. with such a busy and varied schedule that allows full immersion in American culture.

The admission procedure consisted of two stages. First, I downloaded an application form from the Embassy’s website, answered specific questions in detail, and then emailed my answers to the Embassy. The second round followed a week later in the form of a personal interview. A few days after the interview, I received an email with the news that I had been selected for the fellowship by the US Embassy Budapest, and later the US State Department in Washington, D.C., approved my participation in the program.

In all my preparations for my journey, I had the willing support of Vera Kovács, the Embassy’s emerging voices exchanges / alumni coordinator.

This year 53 fellows participated in the program; one from each of 43 different European countries and 10 from the United States. Each fellow had a unique life story and background, which made the team exceptionally diverse.

As soon as I arrived on the campus of Purdue University in Indiana, my classes started. In the first week I learned about democratic citizenship. My classes were usually interactive; we often worked in groups, analyzed case studies, for example, re-enacted a court case that actually happened. I also attended a mock congressional hearing, where I formed my opinion on a privacy issue through a case study, and presented my views to a jury of real U.S. lawyers.

My first field trip led me to the Tippecanoe Battlefield, where I gained insight into the battle that took place there and how it influenced the 1840 U.S. presidential election. Later that week I traveled to Indianapolis, where I took a guided tour of the Indiana Statehouse. That evening I watched the play Mary Poppins at a dinner theater.

My duty in the program was to represent Hungary, so I created and delivered a presentation to the other participants and my mentors which focused on successful Hungarians who have contributed to the development of the U.S., further strengthening Hungarian-American relations.

The second week started off with a special day; it was July 4th, i.e. Independence Day. On this day in 1776, the Declaration of Independence was signed, declaring the independence of the Thirteen Colonies from the British Empire. Americans like to dress up in their flag colors any day of the year, but on the Fourth of July the star-spangled banner is literally everywhere. It’s a day of parades, barbecues and fireworks. My day was much the same. After a picnic in the morning, I had the pleasure of listening to a choir with orchestra accompaniment, and then watched a half-hour fireworks display in the evening in the town of Lafayette.

I met my host family in the second week. They were highly experienced, having hosted BFTF fellows since 2013. My time spent with them was a series of deep learning experiences about the American everyday life and culture. I fed bison, watched a movie in a drive-in theater, and saw robots milk cows. In Indianapolis, I visited the Indianapolis Motor Speedway, the oldest operating racetrack in the U.S., went duckpin bowling, and bumped into a docent of Hungarian descent at the Indiana Historical Society. I also attended a baseball game, visited a basketball arena, an American football stadium, an American high school and a zoo. During the daytime we ate in typical American restaurants and in the evenings I helped prepare American dinners. My host parents were flexible about the programs; when I had requests, they did their best to make sure they were met. Our adventures took place on weekends and on weekday afternoons during the third week, as I spent weekday mornings studying media and journalism on the campus of Purdue University. My host family accommodated two fellows besides me. One of them has become forever memorable for me by solving 3 Rubik’s Cubes underwater while holding his breath for more than a minute in the pool at the university’s sports complex.

During my time on campus, I often visited the university’s huge sports complex. The gym itself occupied several floors, and I also had the opportunity to swim, play badminton and relax.

For the International Food Dinner, which took place in the third week, each fellow prepared a typical dish from their country or region. I served Lángos with cheese, sour cream, and garlic and was delighted to receive nothing but positive feedback on the Hungarian specialty after the Dinner.

One day that week, I traveled to Chicago, which was in a different time zone than Purdue University. Having arrived, I found out about the breathtaking architecture of the city by taking a cruise. After that, I enjoyed the view of Chicago and Lake Michigan from the 94th floor of the former Hancock Tower. Chicago is the “Windy City” indeed; the wind felt really pleasant on my face while roaming around in the downtown area. The next day, I cleaned a homeless shelter as part of the community service part of the program.

In the fourth week, I spent a day in Philadelphia, where, after a bus tour around the city, I visited the Benjamin Franklin Museum. Inside the museum, I followed along the entire life and work of the Founding Father. The exhibit area was divided into rooms according to the character traits of Benjamin Franklin. My favorite room contained a gripping sudoku-type math puzzle.

My last destination was Washington D.C., where I took a guided tour of the Capitol and paid a visit to the United States Holocaust Memorial Museum. The following day, I met the program organizers at the building of the U.S. Department of State. After sharing my experiences with them, the organizers informed me that after the program, I will become an Exchange Alumnus of the U.S. Department of State, which will entitle me to attend private events, have free access to popular online magazines and a database through which I can contact alumni of other U.S. State Department-funded programs.

During my free time in Washington D.C., I stopped by the White House, the Lincoln Memorial, the Washington Monument, and encountered Hungarians participating in another overseas program. One evening I even watched an unconventional show at the John F. Kennedy Center. Americans are open regardless of city or state. Whenever I had a request, I could turn to them, for example, I had several photographs of me taken by American hands while sightseeing. After a short time, Americans’ openness was adopted by European fellows as well.

I encourage everyone who is eligible to apply to do so, as this program can give one a thorough insight into the American way of life in just four weeks, which I believe can only benefit everyone in the future.

During my four weeks in the Benjamin Franklin Transatlantic Fellowship program, I deepened my knowledge of the United States, managed to acquire certain aspects of the American mindset, made countless friends in different parts of Europe and the U.S., and answered more than a hundred questions about Hungary. I shared my knowledge about Hungarian thermal baths, attractions of Budapest, periods of Hungarian history, and special events, such as the Debrecen Flower Carnival.

The whole program was professionally organized; the schedule was full of thrilling activities but they could be completed within the given timeframes. I always knew that in thirty minutes or an hour there would be another item on the agenda, but I never felt tired, mainly because I was never bored during my month of staying in the U.S. In fact, when I returned to Hungary I had more energy than before leaving for America.

The program, however, has not completely ended. I hope that my BFTF friendships will stay with me for a long time, but they need to be nurtured. With that in mind, a few weeks after the program I hosted the Austrian fellow in Budapest.

I am truly grateful to the U.S. Department of State and the U.S. Embassy Budapest for organizing and fully funding this program.

Would you like to know more about the Benjamin Franklin Transatlantic Fellowship Program?

Are you interested in other scholarships and professional exchange opportunities?

Are you looking for alumni speakers?

Invite an American diplomat to give a talk in a school or at a university.

BFTF '22 Fellow in the State Department