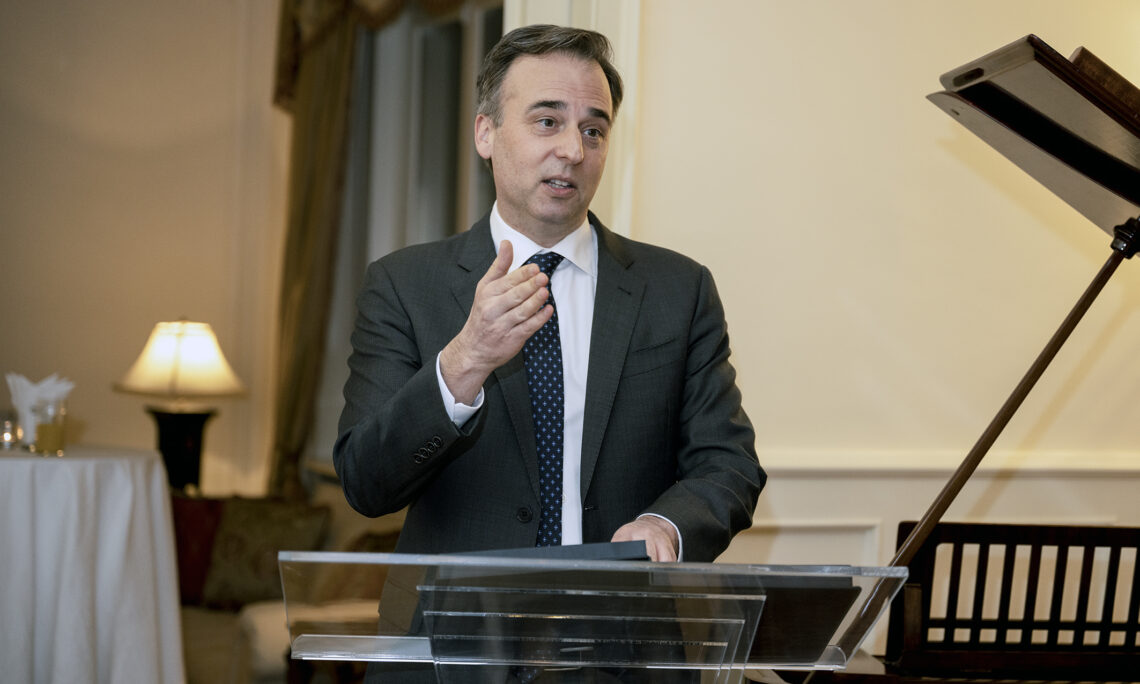 Thank you all for joining us this evening! I would like to give a special acknowledgement and welcome to Deputy Minister Levente Magyar from the Ministry of Foreign Affairs and Trade. It is great to have you join us, Deputy Minister.

I would also like to acknowledge the Ukrainian high school students with us this evening. Most of these young people are in a new country, separated from their families, yet continuing to pursue their education. They have shown remarkable strength, not only to face this crisis with resilience but also in looking out for each other. Welcome.

Thanksgiving famously began to commemorate the generosity of native Americans who literally saved the lives of the Pilgrims, who left England to flee persecution.

Today it remains a favorite American holiday. A time in which we gather as family and friends to share a delicious feast…yes, usually featuring a turkey… and to reflect together upon our good fortune. To be gracious for family, health, and life.

Looking over the past nine months, it may feel like there is little to be thankful for. Millions were forced to flee their homes in Ukraine because of Vladimir Putin’s brutal effort to decapitate a democratic government through an unprovoked war of choice. Of those, hundreds of thousands have passed through Hungary. Many chose to seek temporary refuge here.

Experts project 1 million refugees from Ukraine will have crossed into Hungary by the end of the year. Of those, some 31,000 have applied to stay here with temporary protective status.

Hungary deserves our gratitude for all that it has done to help those fleeing the war in Ukraine. It was by no means a foregone conclusion that it would turn out this way.

Hungary’s response to the large number of refugees from Ukraine stands in marked contrast to its response to the 2015 refugee crisis when predominantly Muslim refugees from Syria, Afghanistan, and Iraq sought asylum in Europe. At that time, the Government of Hungary implemented policies that made it virtually impossible for victims of war from the south to seek asylum here.

The change in approach on the border with Ukraine is warmly welcomed and applauded by the world. One of the reasons we gather today is to thank some of those who have been so instrumental in welcoming those forced to flee their homeland.

Members of the Charity Council, many of you here tonight, have stepped up to support thousands of Ukrainian refugees and internally displaced persons in Ukraine. Other NGOs, such as Menedek Association, Cordelia Foundation, Romaversitas or the Hungarian Helsinki Committee have provided educational and cultural programs, psycho-social assistance, assistance to Hungarian-speaking Roma refugees, as well as legal assistance and information resources to refugees.

When Putin chose to invade Ukraine, the U.S. Embassy established a satellite office near the border so that we could better monitor the situation. My team had the chance to see firsthand the good organizations such as those I’ve mentioned were doing. And not just relief agencies.

A short time after my arrival in Hungary in September, I visited the town of Záhony on Hungary’s border with Ukraine. I was immediately struck by how quickly that small community, under the leadership of Mayor László Helmeczi, mobilized to care for the first refugees arriving in February. Mayor – thank you for making the long trip to join us here tonight.

The town competently and generously took action, even before aid agencies and volunteers arrived on the scene. What a remarkable display of Hungarian hospitality and kindness!

Teachers and schools have also played an important role. I want to highlight the efforts of three specific school communities and acknowledge the presence of leaders and teachers from those schools here with us as well.

The Korosi Csoma Baptist High School raised money to convert shipping containers into dorm rooms outside the main school building for several Ukrainian teens, some of whom are with us today.

The Kazinczy Ferenc Baptist Kindergarten and Primary School provided meals to refugee children and organized camps, while the Berzsenyi Daniel High School collected donations. And of course, hundreds of Hungarians, as private citizens and volunteers, felt they should do something and were also there to provide help.

Often, when we talk about the magnitude of a war or a refugee crisis, we speak in terms of numbers. The millions of people crossing the borders, the millions more internally displaced.
But as those of you in this room know more than anyone, we are not talking about numbers. We are talking about people. Mothers, fathers. Sons and daughters. Families. Entire communities.

And so, as I reflect on what I am thankful for during this holiday, I think of the inspiring work of each of you, and the thousands of others in Hungary who have tirelessly labored to care for those forced to seek refuge from this awful war.

Today we gather with charity organizations, NGOs, international organizations, schools, municipalities. Each of you in your own way has played a critical role in opening your communities to our friends from Ukraine. You inspire me and I thank you for your selfless and courageous efforts.

To the Ukrainian guests here tonight, we especially thank you for joining us this evening. We thank you for your courage and strength. You are not alone in this struggle. The United States is proud to stand with you.

These are difficult times but there is hope in this struggle. Those gathered in this room tonight are proof of a brighter future, for Ukraine, and for the world.

Please enjoy yourselves this evening. I look forward to meeting each of you as we enjoy a Thanksgiving dinner together. Thank you so much for celebrating with us.
Köszönöm. Dyakuyu. Thank you.