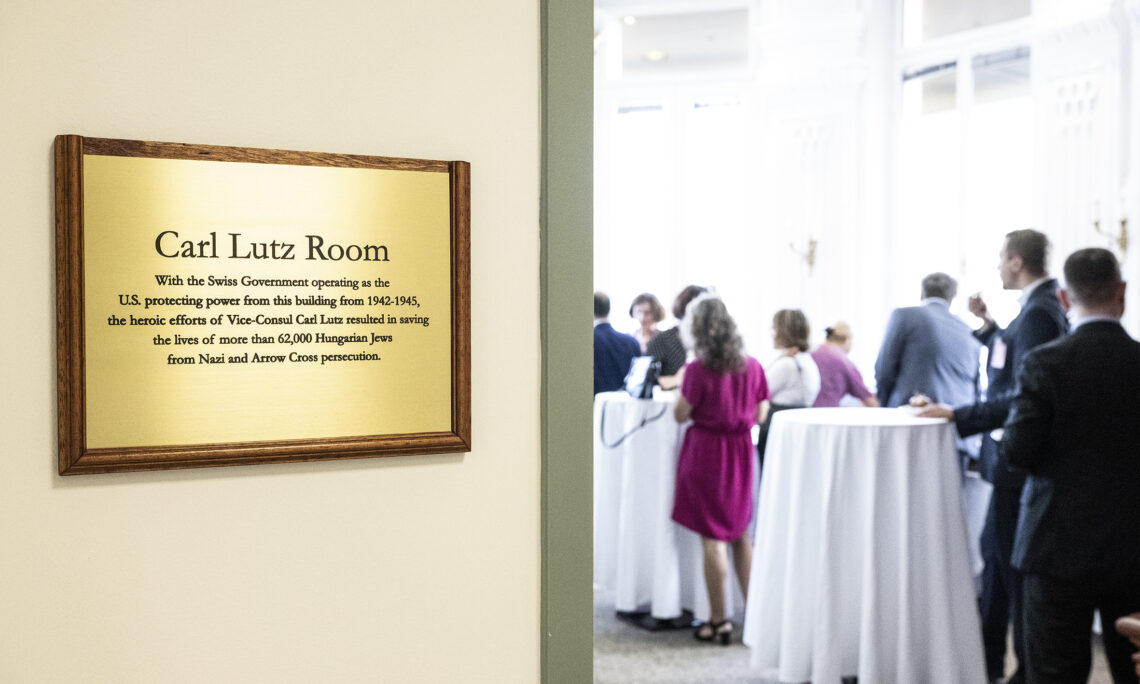 On September 8, 2022, the U.S. Embassy hosted a reception marking the opening of an exhibition honoring the work of Swiss Vice Consul Carl Lutz, who famously saved tens of thousands of Budapest Jews and worked out of the U.S. Embassy legation building on Szabadság tér.

Carl Lutz was the Swiss Vice Consul in Budapest from 1942 until the end of World War II in 1945. Together with diplomats of neutral countries, including Raoul Wallenberg, representatives of the International Red Cross, and with the help of the Budapest Jewish resistance, Lutz worked relentlessly in his temporary office, set up in the U.S. Legation building on  Szabadság tér, for many months to prevent the planned death of innocent people. He created safe houses by declaring them annexes of the Swiss legation and eventually extended diplomatic immunity to 72 buildings in Budapest, saving more than 62,000 Hungarian Jews from the Holocaust.

Thirty distinguished guests, leaders of the Jewish community and human rights NGOs and several foreign ambassadors were invited to Lutz’s former office, now dedicated to Carl Lutz’s memory inside the U.S. Embassy, following the opening ceremony of the “Sanctuary in the Storm – A Jewish Rescue Mission in Budapest” photo exhibition. The exhibit  at the Shoes-on-the Danube Monument celebrates the deeds of Swiss Vice Consul Carl Lutz and the largest life-saving mission of WWII and will run until October 14, 2022.

Distinguished guests.  Thank you for joining us today at the U.S. Embassy in this very special room.  Seeing as I’ve only been in Budapest for less than one week, before I continue with my remarks, I thought I should introduce myself.  My name is David Pressman, and I am proud to be the U.S. Ambassador to Hungary.

So far it has been a whirlwind of briefings and appointments and unpacking, but I am very happy that I am able to be here with all of you for this important event.  I cannot think of a better start to my tenure in Hungary than to gather with you to share in the memory and to honor the truly astonishing legacy and heroism of Carl Lutz.

Budapest is a city rich with history, some of it inspiring and beautiful, some sad and terrible.  Often, this history is obvious.  It is impossible to look at Buda Castle or Parliament and not imagine the amazing events that must have occurred within those walls through the years.  In other places, this historic importance is not so visible on the surface – like the room we stand in right now.

It’s a nice room, with a beautiful view.  However, if you didn’t know any of the history of the room, it might be rather forgettable.  A simple conference room in a pretty building in a scenic square in downtown Budapest.

But when you learn the history of this room…more importantly when you learn the history of the man who worked in this room…everything changes.  If you pause…and listen…you can almost hear the frantic conversations and hurried typing as Carl Lutz worked long hours to save every person he could from the horrors of war raging right outside.  Instead of this pleasant view, you can picture blockades and soldiers and the ever-looming threat of deportation to concentration camps.

This room has history.  In this room, history was made by Carl Lutz.

Thousands and thousands of lives were saved by Carl Lutz as he worked out of this room.  It is impossible for the human brain to comprehend the impact of Lutz’s efforts.  How many artists would never have existed if he had not saved their father?  How many doctors who not have been born if Lutz had not saved their grandmother?  How many farmers, scientists, teachers, mothers, fathers, sisters, and brothers would have been lost to history without the efforts of this one individual?

But we can remember him.  And honor him.  And that is why we are here today.

We raise a glass to his legacy.  And to everything that came after…because of him.

Thank you for your time and your attention.  And thank you for joining us at the U.S. Embassy today in the Carl Lutz Room.