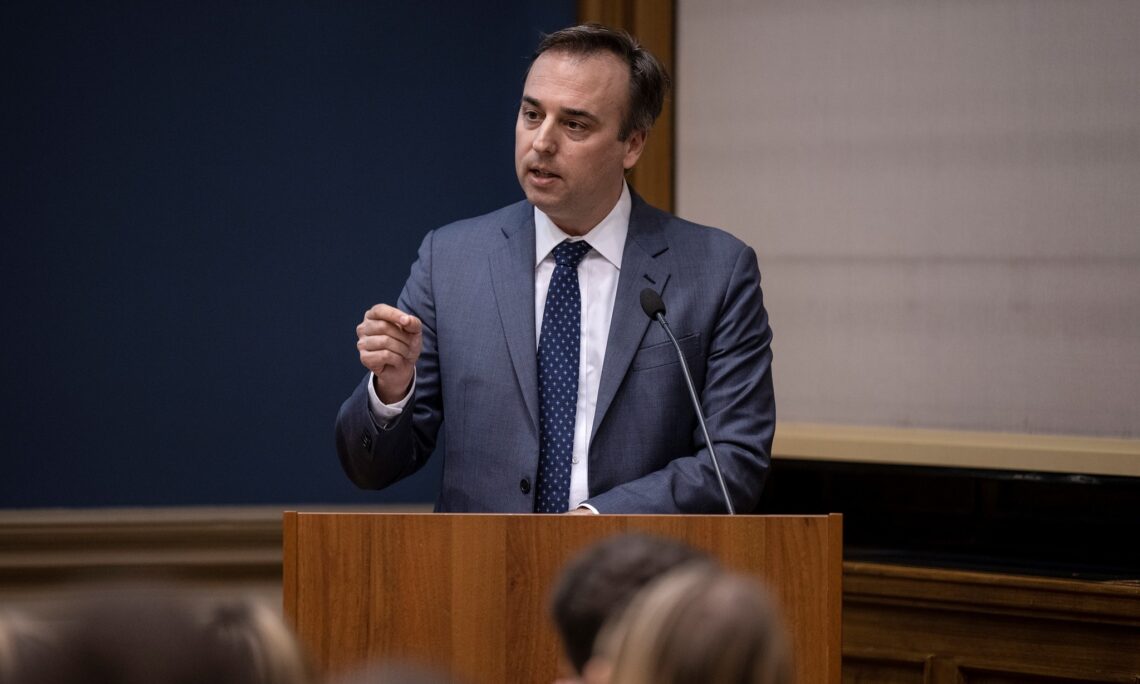 Good afternoon.  Thank you for joining us today to celebrate Congressman Tom Lantos, and to not just mark the launch of the Hungarian translation of “The Noble Banner of Human Rights” – but to rededicate ourselves to the work that defined Congressman Lantos’ life.

When Tom Lantos was sixteen, he found himself thrust into a global conflict that he had no part in creating.  He found his childhood crumbling around him just as Europe crumbled under the blitzkrieg attack of the Third Reich.

When Tom Lantos was sixteen, he was arrested in his hometown right here in Budapest by Nazi soldiers and sent off to a forced labor camp.  He escaped only to be arrested again and once more sent off to a camp.

He could have given up.  No one would have blamed him if he had.  He was barely out of childhood, alone, unaware of the fate of his family, and in the hands of one of the most ruthless, sadistic, and amoral forces the world had ever seen.

By all rights Tom Lantos should have given up.  How could one boy stand up to the power of the German Third Reich and its collaborators?  What good could he do?  Why shouldn’t he focus on merely surviving, hoping for the best?

But as everyone in this room knows, Tom Lantos did not surrender.  He escaped again.  He made his way back to Budapest, by now firmly under the control of Nazi forces.

He made his way to a safe house provided by the Swedish diplomat Raoul Wallenberg and instead of hiding and waiting out the rest of the war, instead of attempting to flee to safety — a hard place to find in 1944 — Tom Lantos decided to stand up, to join the resistance.

In many ways, this is the day the young man born Tamás Péter Lantos in Budapest transformed into the human rights giant and future U.S. Congressman Tom Lantos that the world knows today.

What resonates most about Congressman Lantos’ story to me is how much it demonstrates the power of the individual to change the world.  One person does not end a war, destroy an army, or erase an ideology of hate from the land.  But one person – each of us – can influence and shape the world, like a single pebble can ripple across the waters of history.

We meet this evening in this beautiful city I love, Budapest, at a time where the world’s problems can seem so ugly, enormous and unwieldly.  Just six days ago, I saw the credible reports of mass graves only a thousand miles away next door in Ukraine – boys, girls, women, men – more than 400 bodies thrown into a hole in shallow ground – left for dead by the ruthless and losing forces of Vladimir Putin in this unprovoked and brutal effort to decapitate the sovereign government of Ukraine.

Especially at times where the challenges to the rules based international order are immense and daunting, each of us must do as Tom Lantos would have done.  Each of us must resist the temptation to wring our hands, roll our eyes, sit back.  Resist the understandable temptation to see the enormity of the problems as too great for any single individual to impact, too big for any one person to solve.  The story of Tom Lantos – a 16-year-old boy who refused to hide in idle fear – counsels otherwise.  It is in the moments of the greatest peril to our way of life, that our individual actions matter most – whether you are a Prime Minister or a pauper.

Tom Lantos, of course, was not alone.  He was one of many who refused to bow to the horrors of Nazi Germany.  There are other names, other individuals that we still cherish and honor today.  Raoul Wallenberg from Sweden saved tens of thousands of Jewish lives during the war.

The Swiss diplomat Carl Lutz  — in fact, his lifesaving work was conducted largely from the U.S. Embassy in Budapest.

When a country in Europe decided to unilaterally shatter the peace of the land, to subjugate and kill the vulnerable, it was the resistance of individuals that stood in opposition.

Today the history of World War II is too often taught by memorizing key battles and important dates.  And the bravery and sacrifice of millions of military heroes cannot be denied, but without those of individual courage – without the Tom Lantos’s – human dignity would not have prevailed against the Nazis.   Tom Lantos was a hero, and it is impossible to calculate how many people may have survived because of the food and medicine he delivered to Jewish families hiding under Wallenberg’s protection.

But in many ways what is even more inspiring is what he did with this terrible and traumatic experience.  He transformed that experience, and he dedicated his life to the service of those whose dignity – like his – was challenged.

Tom went on to be a champion of human rights and built a career in the U.S. House of Representatives founded on the bedrock principle that everyone, everywhere should be allowed to practice their faith, to love, to have their culture, to be free from oppression, free from subjugation.

The life of Tom Lantos teaches us that we each bear an extraordinary responsibility as individuals to stand up for what is right, what is just.  There is no institution or coalition or intergovernmental body or government that can substitute for the will of the individual and the determination of individuals to advance human dignity.  The big problems of our world are ours to fix, each of us.

The Holocaust is a singular event.  It was an act of evil that knows no bounds.  Holocaust distortion is a serious problem and something we must condemn.

So, when I speak today of the power of the individual to act and make change in the way Tom Lantos did, it is not to compare today’s challenges to that of the Holocaust.  But is to recognize that remembering the Holocaust – and the righteous heroes of that era – is not enough.  Building museums is not enough.  Pledging “Never Again” is not enough.   Do we tolerate oppression when it seemingly does not affect us personally?  Do we speak out against words of hate that are not directed at us or our loved ones?   When antisemitic imagery is used in political campaigns to mock, belittle, and undermine, do we as individuals speak out against this?  When statues of known and documented Nazi sympathizers and collaborators are erected in so-called places of pride, do we as individuals say “enough?” When the peaceful country of Ukraine struggles and fights to retake its own land only to find mass graves and evidence of atrocities, what do we say?  Not as governments or organizations, what do we say as individuals?

Our words have power.

What we say matters.

And the more power the individual has, whether that power comes from elected office or public platform, the more influence those words have.

It may not always feel the power of the individual matters.  Let’s be honest, it is often easier to remain silent, particularly when it seems something does not affect you.  But these are the times it is most important to speak out.

The Holocaust did not happen overnight.  There was a chain of events that lead to this horror.  Genocide does not just happen.  These are events built, one brick at a time.  But we can stop them.   Neither you nor I can tear down the entire wall perhaps, but we can remove a few bricks, each and every one of us, each and every day, by prioritizing causes greater than our own profile, our own profit, our own politics.

And, just as these acts of evil are built over time, so too is heroism.  So too are the goods things in life.  Just as we can remove bricks, we can add them.  Each individual has the power – and the responsibility – to build a better world.

The passing of Tom Lantos in 2008 left the U.S. Congress — left the world a poorer place, but I know – personally – that his legacy lives on.  His imprint on Congress and the work it does is still evident today.  The U.S. Congress renamed the Human Rights Caucus to bear his name.

The Tom Lantos Institute continues to fight for causes near and dear to the Congressman’s heart: the fundamental human rights of minorities and to stop antisemitism.

And of course, if Congressman Lantos were with us today, he wouldn’t forgive me if I didn’t mention his family.  I think it’s fair to say that his actual family was always at the forefront of every act, every thought, and every fight he took on.  He wanted a better world for his children, his grandchildren, and their children.

Although in many ways the family of Congressman Tom Lantos is vast: I think of the uncountable number of people who he touched throughout the course of his life.  And under that definition, I consider myself a part of this greater Lantos family.

The world is a better place because of a sixteen-year-old boy from Budapest.  And now each of us must live up to his example.

When the problems are the most daunting, we must run towards them unafraid – armed with the power of our spirit, the convictions of our soul, and the ferocity of our will to make this world a more just, more peaceful, and more humane place.  That is what Congressman Tom Lantos started here in Budapest as a boy, and concluded as a giant of human dignity.  His life was, and is, a call to action, and it is an honor to be here with you today to recognize that.