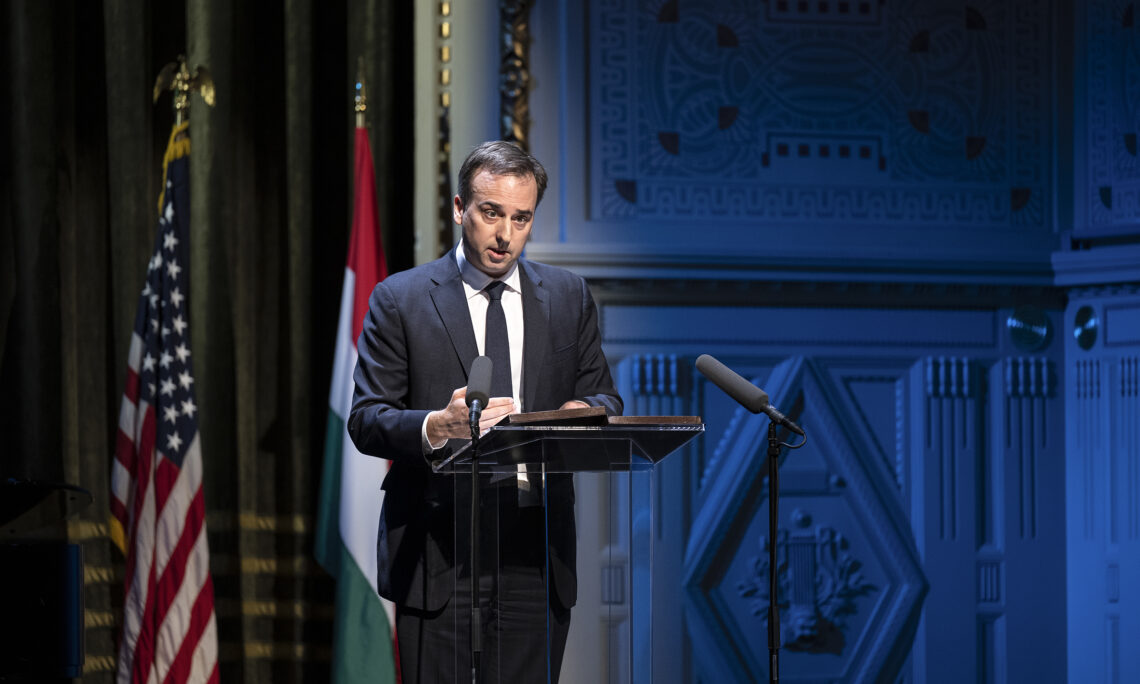 In 1992, the American Embassy and the Government of Hungary came together to establish the Hungarian-American Fulbright Commission.  Today we come together to celebrate thirty years of good work by the Commission.

Although the Commission celebrates its 30th anniversary this year, the Fulbright program has been connecting the United States and Hungary together since 1978.  Fulbright does this by providing the opportunity for dozens of American and Hungarian students, scholars, lecturers, educators, and professors every year to spend several months immersed in each other’s country.  Over the years Fulbright fellows have been hosted by hundreds of the best academic institutions each country has to provide.  Not only is this exchange invaluable in terms of the educational exchange and enrichment it provides, but it is also an incredible opportunity to bring our nations together at a personal level.

We often describe the Fulbright program as the State Department’s “flagship” exchange.  It is one of the most prestigious, most competitive, most challenging, and most rewarding programs we have to offer.  It provides the terrific opportunity for Hungarians to study and research in famed American institutions such as Harvard, MIT, or NYU.  It allows Americans the chance to learn under the tutelage of scholars at the University of Szeged, Corvinus, and many others.

This is a program without a political agenda beyond the desire to, as Senator William Fulbright said, “bring a little more knowledge, a little more reason, and a little more compassion into world affairs and thereby increase the chance that nations will learn at last to live in peace and friendship.”

For the last 30 years the Hungarian-American Fulbright Commission has facilitated this cooperation between our two countries, and the program cannot be seen as anything other than a true success story — for both of our countries.

This isn’t news to anyone in this room.  We all know the value of Fulbright.  We understand the power and potential for positive change when the United States and Hungary cooperate.  We are proud of our American educational and research institutions – Stanford, Yale, MIT – which have few peers in the world.  So, when you hear some of the senior-most officials in Hungary deriding quote “neo-pagan ideology” end quote being taught at America’s educational institutions, as I saw a couple of weeks ago, it is ridiculous – you need only ask the many, many non-pagan applicants to each of those schools from Hungary.

This is serious because it isn’t “just politics.”  It is an assault on the decades of good faith partnership cultivated by our two countries including through programs such as Fulbright which bring us closer together (and closer to facts) and which we gather here today to celebrate.

I mentioned Senator Fulbright earlier in my remarks.  Why was he such an ardent supporter of this country-to-country exchange?  It wasn’t because he thought we needed to address some sort of gap in America’s universities.  It wasn’t because America needed some sort of lure to pull in the best and the brightest from other countries.  The United States has long been the premier destination for any academic.  Senator Fulbright created his namesake program so that we could connect the United States to other countries in a manner that could not be so easily broken by the rash words of politicians and government propaganda.

Fulbright is so much more than an academic exchange.  It is a cultural bridge, providing scholars the chance to experience life in their temporary new homes.  It is a bridge between our two countries, a bridge just as important as any that span the Danube.  And, just as the Chain Bridge sometimes needs a little TLC so that it can continue to serve the people of Hungary, so too does this cultural bridge between the United States and Hungary.  If we do not care for this connection, worse, if we deliberately sabotage this bridge, then we must reckon with the consequences.

The partnership between the United States and Hungary is too important to be allowed to slip into disrepair.  This is not about politics.  This is about people.  And this afternoon we remember and recognize the hundreds of Americans and Hungarians who through the Fulbright program continue to maintain and build an even stronger connection between our nations.

There are so many individual Fulbright success stories that I could share to demonstrate the importance of this program, but let me just mention one person that is on the mind of many tonight.

By 1988 Professor Tibor Frank was already well respected in his field when he was awarded a Fulbright fellowship to teach history at the University of California in Santa Barbara.  He would also later teach at the University of Nevada and Columbia University.  In 2000, Dr. Frank established the PhD program in American Studies at ELTE here in Budapest.  Under his wise and patient guidance, many hundreds of students have furthered their knowledge of the U.S.-Hungarian partnership.  No doubt many in this room were students of Dr. Frank.  And, in the true spirit of Fulbright, not only did Dr. Frank take from Fulbright, but he also gave back, not only to his students and community, but by serving many years on the Fulbright Commission board.

Sadly, we lost Dr. Frank just recently.  Although I did not have a chance to meet with him before his untimely passing, I am honored that we can pay tribute to him tonight.  He is one of many proud examples of the success of Fulbright.

So, while I certainly do not want to downplay the value of the academic aspect of Fulbright, I think we can never emphasize enough the long-term importance of the cultural impact the fellowship brings our two countries.  Today’s gala is the perfect opportunity to experience just a small taste of some of this culture.

It is the Fulbright Commission that we largely have to thank for the long-running success of the program here in Hungary.  The Commission is an important partner to the Embassy, and through Dr. Jókay’s leadership and with the financial contribution of the Government of Hungary, we look forward to a continued successful partnership of short- and long-term impact, a marriage of culture and education that benefits both of our countries.