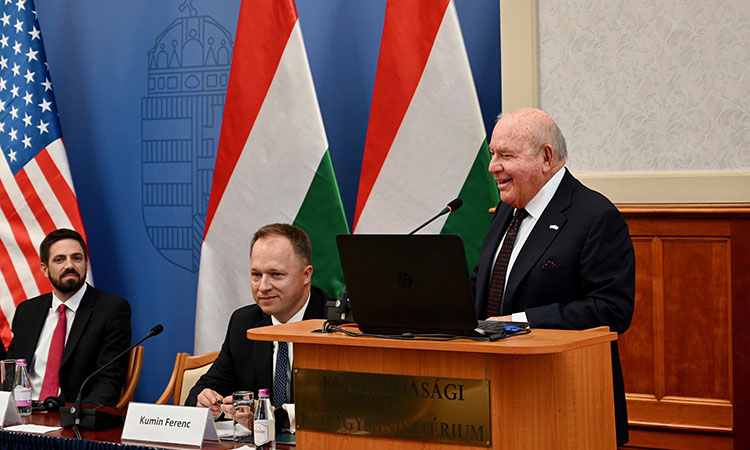 Ambassador David B. Cornstein’s remarks at the Mindszenty memorial conference and book launch

Thank you, Ferenc [Kumin], for this lovely introduction, thank you!  It’s good to see Levente [Magyar] again, and I’m very anxious to hear the remarks of Professor Frank and Don [Kursch]. Don was a former DCM [Deputy Chief of Mission] at our Embassy and our new DCM is here, Marc Dillard, we also have some visitors that just arrived from New York the other day Diane and Arthur Abbey, so welcome, we are glad to have you here as well. You know I often, oh, and especially my colleagues the ambassadors that are here, thank you. And a special call out to my good friend Nuncio of the Vatican [Michael August Blume]. For those of you who do not know Michael, get to know him. He is one of the sweetest, nicest men I have ever had the privilege to meet.  If you haven’t met him, you may want to run over and say hello to him.

I often think why have I been so lucky? Why have I been so fortunate? I was born in 1938 in New York City to two wonderful, wonderful Jewish parents. And I often stop to think what if I was born to two wonderful Jewish parents here in Budapest. And if that were the case perhaps my feet might be in one of the shoes along the Danube, where the Nazis might have shot us in the head together with several other children and thrown us in the Danube to drown. Or why was I so lucky in 1956 to graduate from high school over in New York City, a wonderful school by the name of Horace Mann, and then go on to college and to graduate school, and start a business where if I would have been born in Budapest that year I would have been watching the Soviet tanks come rolling through the streets and see revolution? And why am I so lucky that today some sixty years later to represent the Office of the President of the United States and speak for 330 million American people? Why has all of this been so fortunate for me? I now occupy this office as the American Ambassador where Cardinal Mindszenty… he lived, he slept, he worked  for nearly fifteen years in the office that I occupy, and I have to tell you I feel his presence in that office every single day. Every single day. It’s a tremendous inspiration, and I know that he’d be proud if he is looking down on what’s going on today. He would see two countries, Hungary and the United States, two countries that are allies, two countries that are friends, two countries that are members of NATO, working together and trying to build better lives for their individual countries.

That’s what I do every day that I am here, and I’m so happy to do it. I’m very proud to be here today. I’m very proud to have written the foreword to this book, alongside my friend, Foreign Minister Péter Szijjártó, and I thank you very much for having me here. I thank the two wonderful speakers behind me, Don I know went to Harvard University and then became a Marine and I have a place in my heart for anybody that’s a member of the Corps, then went on to graduate school in Washington. So you can see the level of competency has fallen off dramatically from him to me. So let me turn it over to him. I’m sure he will have some wonderful words for everyone here.