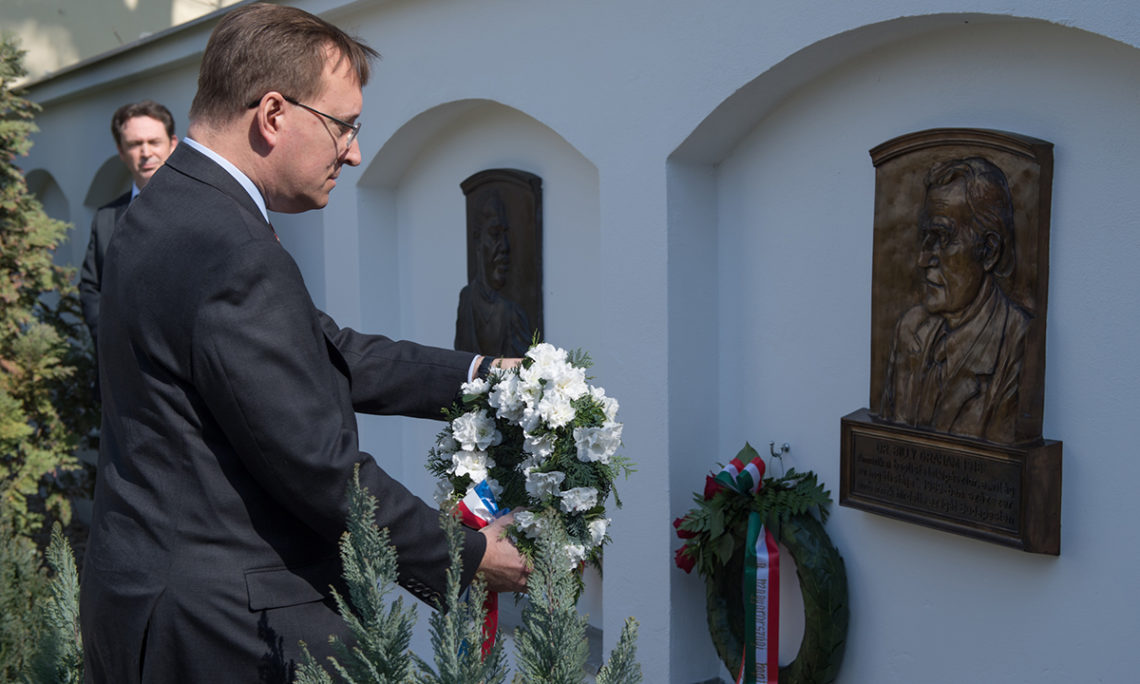 held by the Baptist Union of Hungary

Thank you for the invitation, I am honored to be here today with you commemorating the lives of Reverend Billy Graham and Reverend Martin Luther King, two great civil society activists whose moral voices changed the lives of millions.

Reverend Billy Graham was the most well-known American evangelist of the 20th century.  He carried his message around the world, sharing it with more than 200 million people in person and countless others through television and radio.  His sermons reminded us – in plain terms – that, “There is no excuse, ever, for bigotry and intolerance and prejudice.”  Reverend Graham practiced what he preached.  In 1957, before courts and the Congress acted to end segregation, he integrated his own office.  At events he called his “crusades,” Billy Graham personally tore down physical barriers that others set up to segregate races, and refused to preach in South Africa for 20 years until he was allowed to preach to an integrated audience.  He took his message to the impoverished, to the downtrodden and to the brokenhearted, to inmates in prison, and to the overlooked and the neglected.

Today, we also commemorate the Reverend Dr. Martin Luther King, Jr, a contemporary and friend of Billy Graham who, like Graham, called upon us to follow a moral path.   Reverend King was a hero who fought and died to end racial discrimination and advance civil rights in the United States.  In more than a decade a stirring messages that resonated not just with Americans and not just Christians, but with people around the world struggling against injustice, hatred and poverty, Dr. King called for an end to racism in the United States.  His iconic “I Have a Dream” speech – delivered to over 250,000 civil rights supporters from the steps of the Lincoln Memorial in Washington, D.C., in 1963 – was a defining moment of the civil rights movement.

Dr. King and the American civil rights movement helped inspire the 1965 adoption of the International Convention on the Elimination of All Forms of Racial Discrimination, the first international human rights treaty after the 1948 Convention on the Prevention and Punishment of the Crime of Genocide.

But his legacy is perhaps felt the most through his philosophy, which adopted nonviolence and championed human dignity.  Reverend King inspired others to change their societies through nonviolent means, from the Solidarity movement’s in Poland to Nelson Mandela’s struggle to end apartheid in South Africa.  Following his assassination in Memphis on April 4, 1968, Reverend Graham, a good friend of Dr. King’s, said the country had lost “a social leader and a prophet.”  “I felt his death would be one of the greatest tragedies in our history.”

Today, 50 years after Dr. King’s assassination, many continue to embrace and act upon his statement that “injustice anywhere is a threat to justice everywhere.”  He, and the civil rights movement he led and inspired, remain a model and a point of reference for marginalized communities, and a touchstone for how these communities should be treated.  Both Dr. King and Reverend Billy Graham remind us that – as Dr. King said in a 1954 speech on “Rediscovering Lost Values” – “this world hinges on moral foundations.”   Imploring us to action by appealing to our better angels, to our sense of right and wrong.  “The thing that we need in the world today,” said Dr. King, “is a group of men and women who will stand up for right and to be opposed to wrong, wherever it is [….] People who will stand up for right and goodness.”  Yet, at the same time Dr. King added that God didn’t promise that we would avoid “trials and tribulations” but that “if you have faith in God, He has the power to give you a kind of inner equilibrium through your pain.”

I am reminded of Dr. King’s words today, one day after International Roma Day, celebrated on April 8 of each year.  Although many Roma have overcome significant barriers to achieve social, economic, or political success, the Roma communities as a whole remain on the margins, stigmatized across the world through difference and fear.  Some of those men and women who Dr. King called on to stand up for right are here with us today.  I applaud the Hungarian Baptist community for the important work they do to raise awareness of the issues the Roma face, and, as Reverend Billy Graham did, to tear down the barriers that keep us separate from one another, to remind us that we are equals entitled to the same freedoms and opportunities.

President Trump recently said, “From the beginning, America has been a place that has cherished the freedom of worship.  That is the promise the first settlers saw in our vast continent — and it is the promise that our bravest warriors have protected for all of our citizens in centuries since.”

Dr. King said, “Our lives begin to end the day we become silent about things that matter.”  Not just about peace, but the struggle against racism, against evil in our society.“  His final campaign, the one that brought him to Memphis, his “I am a man” struggle, recognized the dignity of the poor, the disadvantaged among us.   Each is a human, created in God’s image, endowed with unalienable rights – life, liberty and the pursuit of happiness.  Rev. Graham and Dr. King both embodied the responsibility that each of us – Christian or not – has to our fellow humans, the message in New Testament book of Matthew 25:36-40, in which we are reminded that “When you cared for the least of our brothers and sisters, you cared for me.”

Rev. Billy Graham and Rev. Dr. Martin Luther King showed us how churches and religious leaders can lead the struggle not just for religious freedom, but for civil rights and true equality.  I call on all of us to help bring about the day dreamt of by Dr. King when all people throughout the world are judged not by race or religion, but by their individual character.  We need to do more than just admire them and honor them with plaques.  The most fitting memorial to both Rev. Graham and Dr. King can only be in our hearts, and through heed their words, and act, for much remains to be done in this world, our fellow humans need our help.