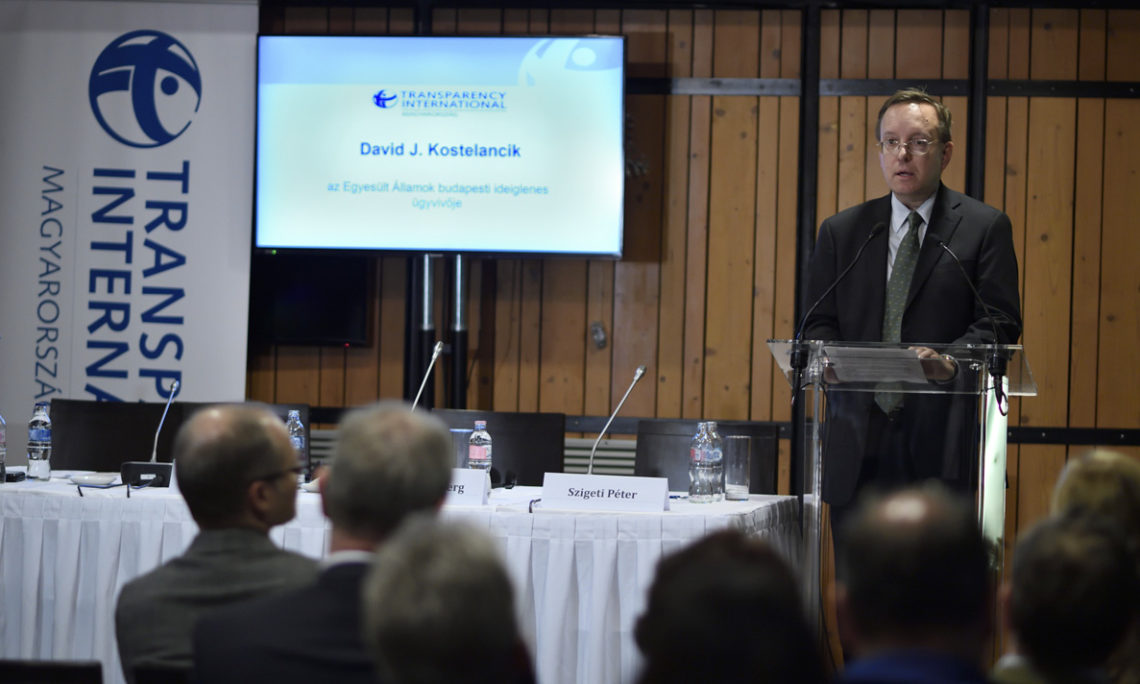 Chargé Kostelancik delivers his remarks at the event. (Embassy photo by Attila Németh)

Thank you Transparency International for inviting me to speak at this event.  Most importantly, thank you for your courageous dedication to the promotion of transparency, accountability, and good governance every day here in Hungary.  Fighting corruption is notoriously difficult and requires a long term commitment.  Transparency International helps provide the constant vigilance that is crucial to the fight.

I am honored to address you all on the occasion of the United Nations International Anti-Corruption Day.  Many of my colleagues in Washington and in other countries around the world are also speaking on this day.  As you are well aware, corruption is a particularly deep-rooted problem.  We are all harmed by its effects.  Promoting transparency is one of the United States’ top priorities.

Much of the focus of your event today is on important questions about corruption in the EU context.  I will leave the details of that discussion to EU Members and experts.

Nevertheless, I would like to speak about the values we share with the EU and that form the foundation of our alliance—values like the rule of law, freedom of expression, and the dignity of human life and individual liberty.  It is in the context of these values that the United States joins the fight against corruption and the support of democratic institutions in general.

President Trump reaffirmed these values in his speech in Poland in July, and called them “priceless ties that bind us together as nations, as allies, and as a civilization.”

Secretary State Rex Tillerson also highlighted them in his address last week on U.S.-European relations.  He said, “The United States and Europe are bound by shared principles.  Our nations live according to a self-evident truth on which Western civilization is built:  Liberty, equality, and human dignity.  These foundational principles are protected by the construct of our institutions dedicated to the rule of law, separation of powers, and representative government.”

To the United States Government, these are not abstract concepts or do-gooder ideals.  These values form the basis of our shared interest in maintaining strong security, a prosperous economy, and healthy democratic institutions that ensure our stability and liberty.  The fight against corruption is directly tied to these shared interests at the heart of our transatlantic relationship.

Given the multitude of security threats and challenges that we face every day, we place great emphasis on bolstering our NATO Alliance and our collective defense cooperation.  Russia continues its aggressive behavior, by refusing to end violence in Ukraine, and by interfering in election processes and promoting non-democratic ideals in countries in the region.  ISIS and terrorist networks are seeking to expand in the Middle East and Northern Africa and will continue to plan terrorist attacks in Europe and the United States.  Home grown terrorists, perhaps radicalized online, are already living within our borders.

In the face of these urgent and highly visible threats, the United States and Europe have had great success working together.  Coordinated European and American sanctions have inflicted painful economic costs on Russia.  NATO Allies have helped us almost completely expunge ISIS from Syria and Iraq.  Hungary in particular has contributed effectively to missions stabilizing Afghanistan and Iraq.  Going forward, the United States Government plans to increase our defense commitments in Europe, and here in Hungary, through the European Deterrence Initiative, a multi-billion dollar investment.

Here in Hungary, the U.S. Embassy enjoys a strong partnership with Hungarian law enforcement.  As part of the Organized Crime Task Force, our FBI works with the Hungarian National Bureau of Investigation to jointly investigate organized crime that affects both the United States and Hungary.  The International Law Enforcement Academy–ILEA– is a joint effort by the United States and Hungarian governments that trains more than 1,000 law enforcement officials every year.  In 2018, ILEA will host a series of training seminars focusing on different aspects of corruption to law enforcement officers, judges, and prosecutors from the region.

In addition, another cornerstone of our transatlantic relationship is our strong economic partnership.  Every year we trade more than one trillion dollars in goods and services, making transatlantic trade the largest economic partnership in the world.  One of our top priorities at the U.S. Embassy is to increase trade and investment between the United States and Hungary, and I know that this is a priority for the Hungarian government as well.  We are committed to working with the Hungarian government on this, because we both know that investment and trade means jobs and economic development for both of our countries.  I am pleased that our bilateral trade has been on the rise and is now at more than $8 billion annually.

The State Department’s annual investment climate report for Hungary discusses this country’s compelling economic competitive advantages as well as increasing challenges posed by corruption.  American businesses have expressed concerns about the lack of transparency and perceived favoritism in public procurements and we have been outspoken about our concerns.

These types of risks in Europe are serious.  They directly impact U.S. businesses.  They impact our trade.  They impact the price and quality of the things you buy and the infrastructure you use.  And they impact the prosperity that our partnership is designed to protect and promote.  We salute Transparency International’s work challenging these threats.

Throughout the world, some political leaders are tempted to use the dangers and instability in the world as an excuse to weaken democratic institutions and decrease transparency, to narrow the space for discussions, debate, and disagreement.  Here in Hungary, as elsewhere, when we perceive negative trends in press freedom, academic freedom, transparency, or the stigmatization of civil society organizations, we report on it and call for action.

In his speech last week, Secretary Tillerson added, “Free nations must exercise vigilant protection of civil societies and the groups, families, and individuals that compose them.  Rule of law and representative governments are empty shells when detached from a vibrant civil society and a deep respect for certain self-evident truths.  We can win every great geopolitical struggle, but if we are not perennially vigilant of our own behavior, our own people may lose in the long run.  The preservation of Western ideals depends on how willing we are to protect the core truths upon which our political and economic freedoms are based.”

This is the context from which we approach our efforts to combat corruption, support free media and civil society, and democracy.

Democratic values have an essential place in our relationships with our allies, as strong a place as our military and economic partnerships, and the United States will always fight to preserve and protect these values.  We rely on organizations like Transparency International to help us in this fight.

Thank you for your attention.