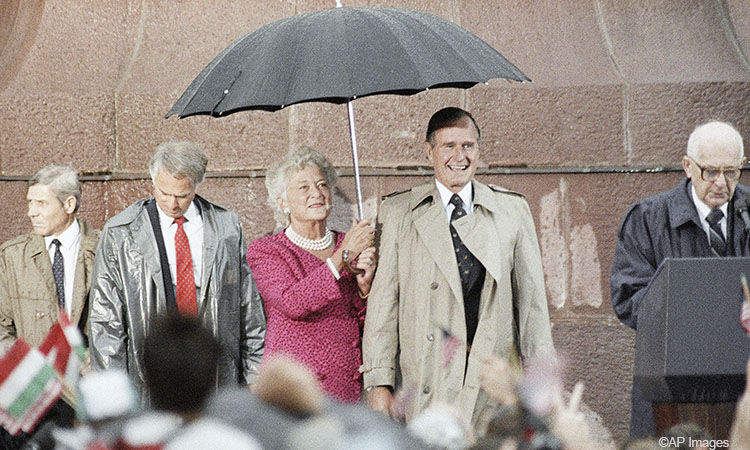 The Government of Hungary and the U.S. Embassy in Budapest announce that a statue will be erected in honor of George Herbert Walker Bush, the 41st president of the United States, in Liberty Square in Budapest on the occasion of the thirtieth anniversary of the fall of communist rule in Central and Eastern Europe.

The statue pays tribute to President George H. W. Bush, who was the first sitting U.S. president to visit Budapest. President Bush is rightly recognized for the indelible contributions he made over a long career in public service, including as president and Vice President, to ending the Cold War in Central and Eastern Europe and supporting the development of democratic institutions. The inauguration of the statue takes place over thirty years after the Berlin Wall fell, the Iron Curtain lifted, and Europe was reunited; when freedom and democracy triumphed in Central and Eastern Europe and the Hungarian people chose to end the darkness of communism and pursue a path of liberty. As a result of this momentous change, and after hard work, the Hungarian people can live in greater security and freedom.

The inauguration of the statue on the 23rd of October 2020 expresses our mutual appreciation and gratitude for the statesman, who contributed to shaping the future of Europe and within Hungary through his commitment and strong morals, and through his advocacy for democracy and against communist dictatorship. It is fitting that the statue will be located close to that of U.S. President Ronald Reagan in Budapest, which will symbolize the joint fight of these two leaders to defeat, in President Reagan’s words, the “evil empire.”

In the 30 years since the end of the Cold War, the relationship between the United States and Hungary has flourished as illustrated among others through our ties as NATO allies and as trade partners. Today, we connect through self-evident truths, our common values and common goals. The actions of President Bush were an indispensable contribution to the renewal and keeping of the relations between our countries. His heritage reminds us that together we are stronger, and our military and political alliance as well as our economic partnership guarantees our security, strengthens our friendship, and serves our common future.