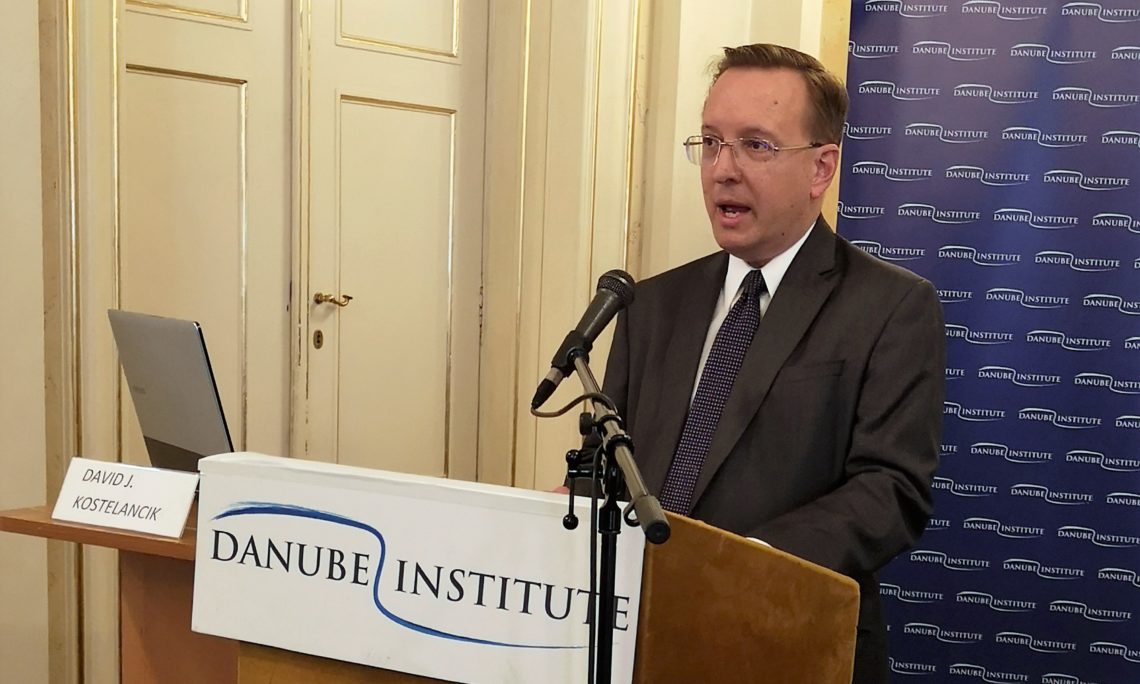 At the Danube Institute Conference on

Dear colleagues, dear friends:  Good morning, and thank you for allowing me to address this important topic.  The history of the United States’ relations with the countries of Central Europe is long and rich.  As we discuss the myriad ways in which European politics are changing, one thing I know for certain is that we Americans and Europeans will strive to maintain the deep and close ties that our countries have developed over the years.

This is a topic and a region that is near to my heart, to my Ambassador’s heart and to the heart of U.S. Assistant Secretary of State for European and Eurasian Affairs Wess Mitchell.  As students of region, all three of us know its history, culture, politics and economics well.  And perhaps more so than some, we are acutely aware of how the United States’ support for the cultural, political, and economic sovereignty of nations has been a constant theme in our relations with Europe, and particularly with Central Europe.  Here on the ground in Hungary, Ambassador Cornstein is taking the lead on these principles and is absolutely committed to strengthening the U.S.-Hungary relationship.

The trans-Atlantic idea has been one of the cornerstones of foreign political thinking in Hungary since the mid-19th century.  As Lajos Kossuth said:

“The nations of America and Europe are at this day so dependent upon one another, that the effects of any event, prosperous or otherwise, happening on one side of the Atlantic, are immediately felt on the other side.”

Those words were delivered by Kossuth in New York on 11 December 1851. In his American campaign of 1851 he advocated ending American isolationism and was an early proponent of the concept of trans-Atlanticism. He argued that the Atlantic was no longer a barrier but rather a link, that freedom and democracy in Europe was also a vital interest for the American Republic, and, finally, that trans-Atlantic cooperation was essential to preventing authoritarian countries like Russia from interfering with nations’ pursuit of freedom.

For more than 40 years, the nations of Central Europe were not free.  Communist ideology and the military might of the Soviet Empire held national aspirations and national culture in check.  Next year we will celebrate many important anniversaries, but perhaps the most important will be the 30th anniversary of 1989, when the Hungarians and other Central European peoples made the historic choice to throw off a system of economic and political oppression and to embrace an alignment with their historic partners in Europe and the transatlantic community, including the United States and Canada, and to reaffirm their commitment to the Western values represented by institutions such as NATO.  Next year will also be the 20th anniversary of 1999, when Hungary further deepened its commitment to a Western trajectory by joining NATO.  And it will be the 15th anniversary of 2004, when Hungary cemented its place in Europe as member of the EU.  2019 will be a fantastic opportunity to celebrate these significant dates in Hungary’s history.

Just as Hungary and other Visegrad Four countries should look back with pride on the achievements of 1989, 1999, and 2004, the EU and the United States should consider ourselves fortunate to have such strong and vibrant partners in Hungary, the Czech Republic, Poland, and Slovakia.  The international system that we have built together has been an engine for huge economic growth, rising standards of living, and the firm rooting of the fundamental Western values of political and economic liberty.

As I’m sure we’ll discuss today, though, this European order—and indeed the entire post-war international system—faces unprecedented challenges.  Forces opposed to those shared Western values are reasserting their strength, and are probing at our alliance, trying to drive wedges between us.  We can see this across the world—whether it is Beijing’s assertiveness in the South China Sea, and wielding its economic weight for political influence through the Belt and Road Initiative; or whether it is Iran continuing to sponsor terrorism and support proxies to destabilize the Middle East.  In Europe and the West, Russia’s flagrant departures from the norms and standards of international behavior are a threat to the continent not seen in decades.  The criminal  invasion of Ukraine, the illegal attempted annexation of Crimea, which remains sovereign Ukrainian territory, repeated attempts to interfere in Western countries’ electoral processes, relentless disinformation flowing into Western media markets, a nerve agent attack on the soil of a NATO ally—we cannot allow any of this behavior to stand unchallenged, or Moscow will push further.  This is truly a time for us in the Transatlantic community to show our resolve and our solidarity.

NATO is a clear mechanism to do that, and we laud Hungary’s plans to achieve its 2 percent Wales Pledge commitment early, by 2024.  Hungary’s troops are deployed in support of NATO, EU, and UN peacekeeping missions around the world, and the United States is proud to stand shoulder to shoulder with our Hungarian allies.

Standing up to Russia, however, must go beyond NATO, and indeed beyond the conventional security sphere.  Russia is waging an information war on the West, and we must clearly and resolutely speak up for the truth, while refuting the conspiracy theories and propaganda narratives that the Kremlin pushes.  In some cases it may mean mitigating political rhetoric that could be taken as an endorsement of Moscow’s official world view.

We must also remain united in our resistance to Russia’s economic leverage in the West.  Our sanctions regime is having a clear impact on Russia’s economy, and is raising the cost to Russia of carrying out its malign behavior.  I know that Hungary has qualms about the cost of maintaining these sanctions, but solidarity in this matter is essential.  The cost of unchecked Russian aggression will be higher.  We are also working with Hungary to help Central Europe diversify its gas sources, including through the Krk Island, Croatia LNG terminal and the Romania Black Sea gas project.  Both of these would provide genuine alternatives to the Russian gas supplies that constitute virtually 100 percent of Hungary’s imports, and that play such a dominant role across the region.  Russian-backed projects to include Nord Stream II and Turkish Stream, however, would deepen and extend this dependence, and we hope Hungary will join us in opposing them.

United States’ support for the Three Seas Initiative is the tangible demonstration of our commitment to helping our friends in Central Europe overcome the legacy of Soviet energy policies which built one-directional pipelines from east to west, keeping counties dependent on Russian sources of energy, isolated from one another in spite of historic friendships and the national and regional interest of north-south pipelines and energy cooperation.  We have intensified coordination with like-minded states via such mechanisms as the Three Seas Initiative, the Bucharest Nine and the Visegrad Four.  These groupings can be force multipliers for coordinated preparedness, planning, and responses, sending a strong message to adversaries that the United States and its European allies and partners are willing to impose costs for destabilizing behavior.  More than just a mechanism for sharing views, we are very pleased to see the V4 and its members develop the potential for real regional cooperation on issues that transcend borders, such as energy.

Next year we will see elections to the European Parliament, and in many European states, that may lead to changes in the makeup of the EU’s leadership, and in the political dynamics of member states.  I have no doubt that pundits will cite these changes to again question the durability of the transatlantic alliance.  So my Ambassador, our Assistant Secretary, I and others in our Government will continue to take every opportunity to be very clear about this: the United States commitment to NATO is rock solid.  Our commitment to resisting Russian aggression in Europe is resolute.  And our commitment to working with our Central European allies to deepen our partnership and to advance those goals is enduring.

Just as we stood ready to welcome the nations of Central Europe into the Western system in 1989, today we stand ready to join them in defending that system against its challengers and building new cooperation that will strengthen our understanding and undergird economic and security progress for the benefit of our nations.  I look forward to our discussion today, and to talking further about how together we can strengthen our historic partnership.

Thank you very much for your attention.