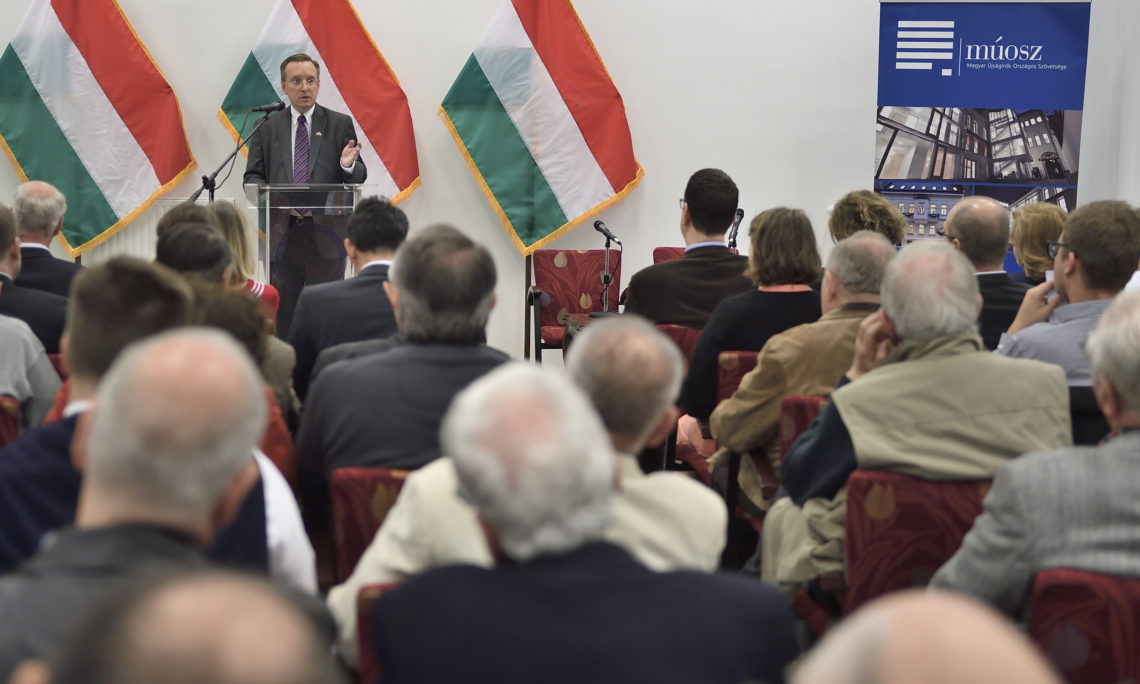 Thank you very much, and thank you President Hargitai for the kind introduction. I would like to thank MUOSZ for the invitation today, and for the organization’s long-standing commitment to the craft of journalism in Hungary.

I would also like to thank the esteemed Gyorgy Baló for joining us today and sharing his expertise.

Finally, I would like to acknowledge my colleagues in the diplomatic corps who are with us today.

I arrived in Hungary just over a year ago, and I’ve met many of you in the course of my work.  In addition, we are voracious consumers of your articles and broadcasts in the Embassy, and we share a lot of your reporting with our colleagues in Washington, D.C.  We have a great deal of respect for the press corps working in Hungary, both Hungarian journalists and international correspondents.

I am here to speak with you today about America’s commitment to the First Amendment and what free press means to us.  I want to begin by thanking you.  Even in difficult times you continue to press forward and ask difficult questions.  Your commitment to seeking out the truth and shouting it from the mountaintops remains a democratic staple and I truly appreciate what you do.  Let me say it again: thank you.

I must make a confession: as a diplomat dealing with sensitive and consequential issues, I sometimes have a complicated relationship with the press.  I think many of my fellow diplomats would agree.

You ask us about controversial issues.

You ask us about shortcomings in our countries.

You ask us about apparent inconsistencies in our foreign policy.

You ask us about our plans and policies and reactions to events before we even know what they are.

Ultimately, though, as representatives of democratic governments, we know that you are not doing your job if you don’t ask tough questions.  We know that we must be accountable to the citizens we represent, and the daylight provided by a vigorous, free, and independent press is fundamental to achieving this accountability.

The embassy staff keeps a running list of talking points to help me prepare for certain difficult and sensitive questions that you may ask.  I’m not going to tell you what they are—I don’t want to give you too many ideas—but I will say that knowing you are here, ready to question and analyze and publicize, sharpens our thinking about our programs and plans and policies.

Is it compatible with the values we claim to hold?

Is it something that’s appropriate for a diplomatic mission?

And are we ready to defend it publicly?

Ultimately, we are more effective and more ethical representatives of our countries because we know that you’re out there, ready to report.

This dynamic is not unique to me or to diplomats.

In fact, the need for accountability is one of the primary reasons that freedom of the press is protected by the First Amendment to the United States Constitution.  Our founding fathers, having witnessed the sharp restrictions on speech and punishment for political dissent under the rule of the King of England, recognized that a free, democratic society cannot exist without a free press, fully empowered to inform the people about the actions of their government and giving them the tools to make sure the government does not abuse its power.

For the same reasons, protections for a free press are also found today in the Hungarian Fundamental Law.  Your experience in a society without free press is more fresh and recent than ours—I’m sure that many of you lived through the days when the only alternative to “official news” came from brave Hungarian men and women publishing samizdats in secrecy of their homes, striving to speak truth about the Communist system.

Because of these experiences, because of the horror and failure of the alternative, protections for freedom of the press are enshrined in the United Nations Universal Declaration of Human Rights, the NATO treaty, the EU Charter of Fundamental Rights and the OSCE’s Charter for European Security, and in the constitutions and law books of democracies throughout the world.

Our strongest, most stable, most trustworthy allies are those that share this commitment.  In his address to the people of Poland in July, President Trump spoke of our transatlantic alliance and the values at the heart of it—the “priceless ties that bind us together as nations, as allies, and as a civilization.”  Among those values he proclaimed, “We treasure the rule of law and protect the right to free speech and free expression.”

Men and women everywhere who cherish liberty know they must protect the freedom of the press.  For this reason, I am not the first American official, and will not be the last, to speak in defense of a free press.  It is fundamental to our foreign policy interests.

Let’s take for example the photos currently on display at the Museum of Ethnography in the World Press Photo exhibit, which I have spent time absorbing and which I strongly urge you to visit, if you have not already, before it moves from Budapest on October 23.  Brave, creative, curious journalists captured moments of import, moments that tell a story by themselves.  The stories they tell speak of triumph and tragedy, truth and awareness, bravery and failure, and journalists were there to capture it all, to report on what they saw, and to share history.  These photos change our perceptions and can impact how viewers see the world.  They remind us we need to remain open to new information and perspectives, including ones that don’t fit with our existing assumptions.

As I lay out my advocacy for freedom of the press, I want to be clear on one important point: freedom of the press does not mean that the press should be free from criticism, including from a government.  I doubt this will shock you, but there are times when the press gets the facts wrong, or reports only those facts that support a particular editorial bias.  I fear that in many places, the practice of objective reporting has become quaint and old-fashioned.  It seems as though there’s no longer a separate “opinion section” in many publications–opinions dominate the entire publication.

My president is not shy about criticizing the media when he believes reporters get it wrong or show bias, and he is forthright in sharing his own perspective and advocating for the policies he supports.  He criticizes news he believes is biased or inaccurate in order to try to change the narrative.  In the finest traditions of our free press, those on the receiving end of his criticism are quick to respond and make their argument about why they think the president is wrong.  As they often point out, not every criticism of the government is “fake news.”

A democratic society with a free press is a messy place, especially with the proliferation of blogs, social media, online news, and the nonstop news cycle.  I don’t claim to have all the answers about how to navigate this new media environment, though it’s clear to me that as government representatives—as servants of our citizens—we must work harder to illuminate, to present the evidence, to show and not just tell, and to adhere to logic and reason when we engage in debate.  We should consider other points of view, and urge our colleagues and citizens to do the same.  And we must urge responsibility and professionalism and integrity on the part of the press, and should not be afraid to speak up when we see shortcomings.  We must also be responsible, discerning consumers and refrain from spreading incomplete, inaccurate, or deliberately misleading information.

Above all, there is one temptation to which we must not succumb:  democratic governments must not attempt to silence their critics.

This temptation is perpetual, and it can happen in more than one way:

In recent years, the United States has spoken on multiple occasions about negative trends in the sphere of press freedom in Hungary.  Unfortunately, these negative trends are continuing.

And, in a recent alarming development, some media outlets closely linked to the government published the names of individual journalists they characterized as threats to Hungary.  This is dangerous to the individuals, and also, to the principles of a free, independent media.

These media outlets have every right to criticize or disagree with the reporting of other journalists, but to attempt to intimidate them and make their work dangerous is inconsistent with international pledges to safeguard free media.  We must protect free press, even when it is critical of us, as it is the very foundation of democracy.

The United States unequivocally condemns any attempt to intimidate or silence journalists.

There are still independent and opposition media outlets here that are able to practice journalism with broad editorial freedom.  This is a good thing.  However, their numbers are dwindling, and they face challenges in the advertising market that the pro-government outlets do not.    They face pressure and intimidation.  As a result, fewer and fewer Hungarians are exposed to the robust debate and discussion that is so important – in fact fundamental – to a representative democracy.  How can the people meaningfully express their will if they only have access to one point of view?

Thomas Jefferson, one of America’s founding fathers and our third president, wrote that he “would rather be exposed to the inconveniences attending too much liberty than those attending too small a degree of it.”  In other words, he recognized that “too much liberty”—the messy, loud, chaotic vibrancy of democracy that can be frustrating for all of us is better than the alternative when the government decides what you should think and what voices you should hear.

Protecting freedom of the press is a shared and sacred commitment, and a vital, ongoing imperative that must be practiced and valued in my country, in Hungary, and in every country that lays claim to democracy and freedom.

You and I have a messy relationship.  There are things you want to know that I can’t tell you, things I want to tell you that you aren’t interested in.  Sometimes we call each other names.  But, believe me, I will never take for granted the vital role that you play in doing what you think is right for the people, just like I do.

Thank you all for the critical role that you play in holding us accountable and preserving freedom.