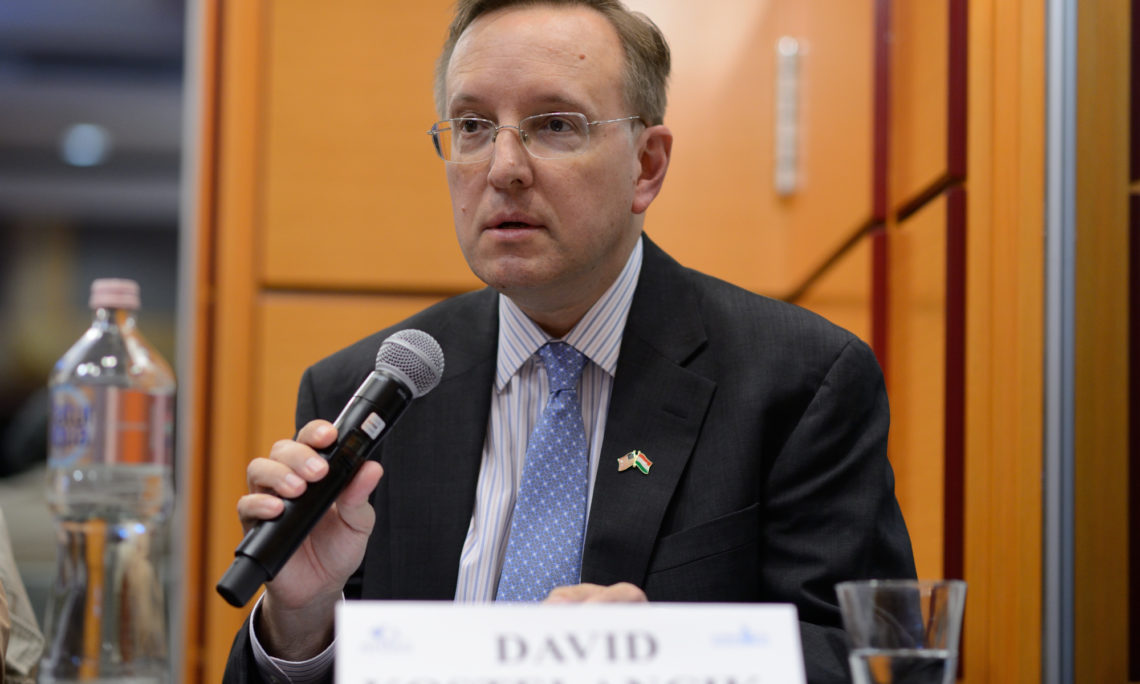 Thanks to European Liberty Forum, Free Market Foundation, and Zoltan Kesz for inviting me to participate in what will undoubtedly be a lively and spirited conversation.

Today’s topic, “Hungary’s Place in Europe” is an important one, and one that Hungary has been discussing throughout its history.  The question is often reduced to whether Hungary looks to the East or look to the West.  While this makes for some great conversations at fora such as this one, it presents a false dichotomy.  Hungary, by its own account, looks to the East and to the West.  Yet even as a country that makes explicit its standing at the crossroads of major powers, it is firmly and inextricably anchored in the West.  It has committed itself to the values and undertaken the obligations of membership in the EU and in NATO, a reflection of the aspirations of its people to tie their fortunes to the promises and freedoms of Western democracies.  It has planted its roots in the West.

This is not purely rhetorical.  Hungary plays influential roles in international organizations.  It participates in peacekeeping missions throughout the world. Despite a dependence on Moscow for hydrocarbons, Hungary has stood with Europe and the United States in sanctioning Russia for its aggression in Ukraine.  I have always believed that you should judge people by their actions, not their words.  If we hold Hungary to that same standard, if we judge Hungary by its actions, it is clear Hungary has made a firm commitment to Europe, to the United States, to the West.

There is no greater example of Hungary’s commitment to Western values than the role it plays in NATO.  NATO is about much more than shared security interests.  It is a community of values reflected in Article 2 of the NATO Treaty, usually referred to as the Washington Treaty, which obliges all members to strengthen their domestic democratic institutions.  That is one of its cornerstones and, I believe, the key to its success.  We aren’t just bound together because we face common threats.  We are bound together because of our shared commitments and shared ideals.  That’s why NATO endures, long after the end of the Warsaw Pact.  That is why we can continue to rely on it today, even as the world we live in and the threats we face have changed.

In 1956 Hungary faced external threats and ordinary Hungarians took a stand.  The United States stood with Hungary, including at the United Nations, demanding answers from the Soviet Union then, and joining Hungary for an opening of UN archives on the revolution.  Now, as 60 years ago and during the intervening years, we also find ourselves at another inflection point in history.  All of us again are called to show courage in the face of our fears, to smooth difficulties and correct mistakes.  We are called to defend our values.  We are called to remember the very essence of our civilization, the belief we hold most dear, is the inherent dignity and worth of every single person.  It is what sets us apart.  This belief is what holds NATO together.  It is this same belief, I think, that binds Hungary to Europe and Europe to Hungary.

As the threats and opportunities changed in the post-Cold War period, both NATO and the EU changed, strengthened by the cooperation among allies within the alliance and partners within the EU, including the U.S. and Hungary.  The United States, Hungary, and our EU allies and partners still have work to do to help the Balkans, the Caucasus, and Ukraine to consolidate as free, democratic societies with liberal, market-based economies.  These steps benefit not only the Balkans, the Caucasus, and Ukraine; they benefit all of us.  And for all of us, creating a Europe “whole, free, and at peace,” remains the central task for the transatlantic community.  The risk of failing to uphold our commitment to this objective – our shared commitment – is a world divided, beholden, and in pieces.

The principles for which the United States stands, in relation to the Hungarian people and the Hungarian government, have never changed.  Today Hungary’s National Security Concept states in Article 12 that “Membership in NATO and the EU provides the basic framework of Hungary’s security policy.”  We wholeheartedly endorse that.  We are committed to working closely with Hungary, bilaterally and at NATO, the OSCE, and through the EU, to strengthen connections and to help Americans and Hungarians and all allies and partners in Europe enjoy the closest possible cooperation and relations for their mutual benefit.  Article 18 of Hungary’s National Security Concept states, “The protection of the freedom, welfare, and security of Hungary, its Allies and other international partners constitutes a national, allied, regional as well as a global responsibility.”  We agree.  It is the responsibility of us all to live up to our commitments to democracy and liberty, including those made by Hungary in 1999 in the Charter for European Security, signed by PM Orbán.  We agreed we would all defend, and remind others of the need to defend, the basis for our freedoms and prosperity, including free and open media, strong civil society  including NGOs, and academic freedom.

The strength of the bilateral partnership the United States and Hungary have developed, like our security relationship through NATO, is the fact that it is not transactional; it is built on a foundation of values.  Hungary has chosen to plant its roots in this shared foundation of values, in the institutions and protections of its Western alliances.  Economic fortunes may shift.  Opportunities may sometimes be better in the East.  Sometimes it will be better in the West.  In the long-term however, Hungary will lean toward Europe.  Not because it is safer, not because it is economically advantageous, but because Europe, Hungary, and the United States share a foundation of democratic values that bind us together.

The last few years have witnessed a series of major tectonic shifts in transatlantic relations – from the euro-zone crisis and the stagnation of western economies to migration and the weakening of fragile states to Brexit and the rise of populism to Russian aggression in Ukraine.  All of these pose different challenges to the liberal democratic order, an ideal we started to take for granted.

We’ve all seen the violence and heard the evil in Charlottesville and unfortunately elsewhere in the United States.  Ours has been and will continue to be a hard journey to a more just society.  We are helped by an open, vigorous debate via free media and strong institutions.  Now more than ever Hungarians, Americans, and the rest of our Western allies must use our friendship and commitment to shared democratic values to strengthen these institutions, the best guarantee for a stable, equitable society.  Our societies must embrace a greater justice that recognizes the inherent dignity of every human being.

Great principles have not been lost.  They are right here.  We just need to see them again amid the rancor, the noise, the din of the moment.  More than history or geography, even between two great friends like Hungary and the United States, it is our shared values that unite us, give us common purpose, brought our people together, and will guide our future efforts.  And as long as that is true, Hungary’s place is in the West.