Home Főoldal | Embassy | About the Embassy | Embassy History | Return of the Holy Crown of St. Stephen 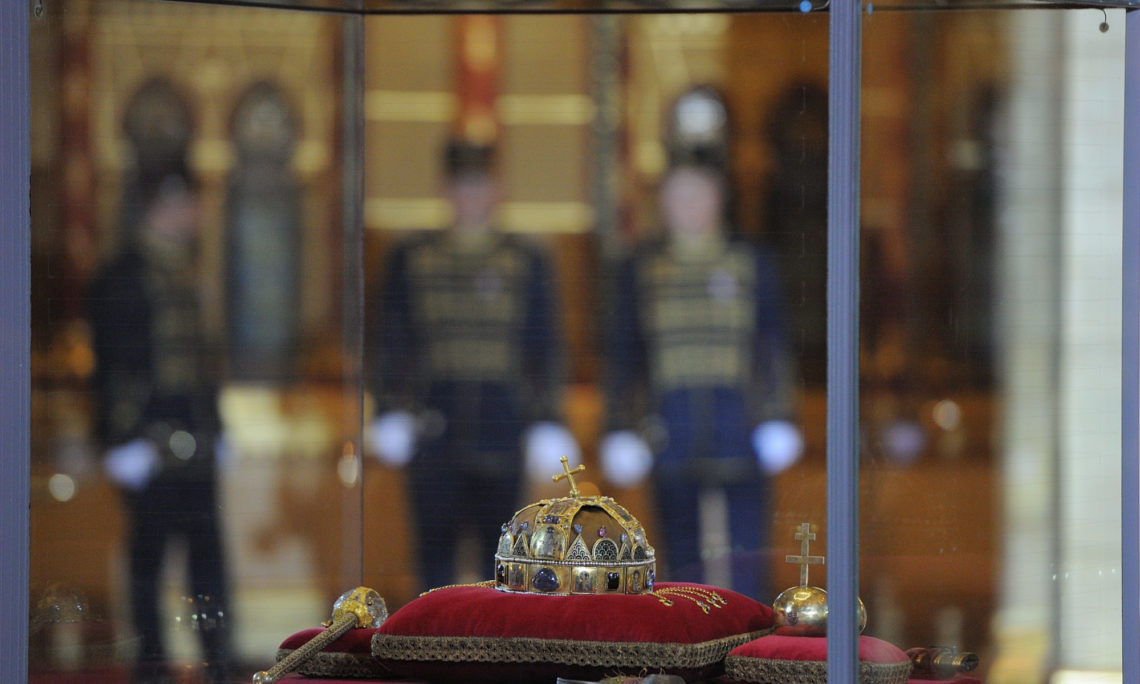 The Holy Crown of Hungary

When Stephen became King of Hungary on Christmas Day in the year 1000, Pope Sylvester II made him the gift of a crown. Stephen had resolved to raise Hungary to the status of a Christian kingdom, placing it on an equal footing with other European states. He had shrewdly requested his crown from the Pope, the spiritual leader of Western Europe, rather than from the Holy Roman Emperor. This crown became one of the most powerful symbols of Hungarian nationhood.

During World War II, the crown was spirited out of Hungary to protect it from the Germans and the Soviets. On May 2, 1945, the Holy Crown and other jewels were handed over by a Hungarian Army Colonel to a U.S. Army Colonel near Egglesberg, Austria. The Crown had been packed in a large black satchel. It was initially sheltered in Wiesbaden, in the American Zone, but was later transferred to the United States Gold Reserve at Ft. Knox, Kentucky. It was not considered as spoils of war; rather, the U.S. Government stored it in hopes of returning it to the Hungarian people one day.

The decision by President Jimmy Carter to return the Crown in 1978 was a controversial one, and one which took political courage. President Carter made his decision based on the evidence that Hungary’s record on human rights – its tolerance of religious expression, its facilitating of travel and communication – while not perfect, deserved recognition as an example to other Soviet-bloc countries. Many people on both sides of the Atlantic adamantly opposed the return of the Crown at a time when Hungary was still under Communist rule. Carter felt that it was only right that the Crown be returned before a whole generation of Hungarians came of age without understanding its symbolism. After all, he said, the Crown belonged to the Hungarian people.

As hoped, the return of the Crown was both an occasion for improving U.S. – Hungarian relations and a device for pulling Hungary towards the west. It allowed the traditional warm relations between the two countries to resurface.

The delegation that President Carter sent to bring the Crown to Hungary was a distinguished one, led by Secretary of State Cyrus Vance. It included Senator Adlai Stevenson, Congressman Lee Hamilton, and Nobel Prize Winner Dr. Albert Szent-Györgyi. On the Hungarian side, the Cardinal, the Chief Rabbi, Protestant Bishops, and leaders of the academic, scientific and cultural communities participated in the ceremony, as well as representatives of the Hungarian state.