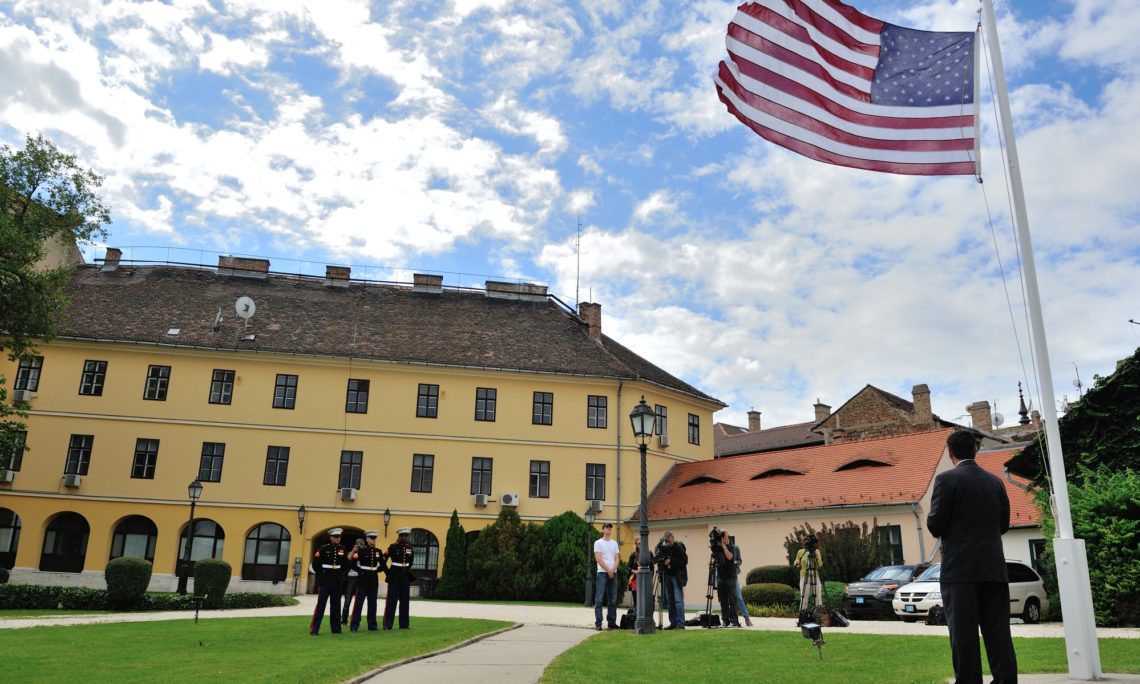 This rambling compound, on Táncsics Mihály Street, in the Budapest Castle District, just down the street from historic Matthias Church, was owned by the U.S. government from 1948 until 2014.

The history of these buildings is closely connected with that of Hungary itself, as well as with important developments in the architectural history of the Buda Castle District. The earliest elements of previously occupying the site date to the late 13th and 14th centuries, when the Royal Mint (Domus Regalis or Kammerhof) stood here, according to Hungarian researchers. Fifteenth century documents confirm that the buildings still must have been there. The famous archeologist László Zolnay, who headed a special research project into the architectural history of many of the structures on Castle Hill in 1962, thought the property might have housed the first royal settlement in Buda, as records show that Vencel, the king of Bohemia, stayed there during his visit to Buda in the early 14th century. The accepted scholarly view is that the first castle in Buda was built in the mid-13th century on the South of the Várhegy (Castle Hill) during the reign of Béla the 4th. However, that first castle was a military fortress, not appropriate as such for hosting a royal guest.

The former old castle wall runs along the edge of the property. From a military historian’s perspective, it is interesting to note that the so-called Erdélyi or Transylvanian Bastion, built here around 1530, during the time of János Szapolyai, and probably designed by the Italian military engineer Domenico da Bologna, was the first example of the new Italian style bastion construction in Hungary. After the Turks occupied Buda in 1541, Marsigli’s map suggests that the Turkish janissaries’ cold storage “ice-pit” for perishables was then located on the site.

The medieval buildings on the site were greatly damaged in 1686, as were most of the houses in Buda, when the city was retaken from the Turks. The medieval structures on the site were all destroyed, and only portions of the original walls survived. The reconstruction of Buda in the 18th century saw considerable activity on the site.

Lajos Kossuth was imprisoned within the compound, from 1837-40, for subversion (specifically, publishing letters describing the proceedings of the Diet of Pozsony/Bratislava and the County Assembly of Pest). Such Hungarian historical luminaries as Mihály Táncsics (1847-48; 1860-67), Miklós Wesselényi (1839-40), and Lajos Batthyány (from 1849 until his execution) were among the other “status prisoners” jailed within the compound’s walls (probably in the so-called Joseph Barracks), either because of what they wrote or for political activity.

The Joseph Barracks, built sometime after 1810, and fronting on Táncsics Mihály Street, features a simple, undisturbed facade, with nine axes divided by two belts. Its entrance is a baroque gate with an arched frame. Two Historic monument plaques, commemorating the imprisonment of Lajos Kossuth and Mihály Táncsics, are affixed on either side of the gate. Inside is an exceptional three-armed staircase. The courtyard facade is very simple, with only a row of arches on the ground floor emphasized. Two one-story side annexes were added to the left and right of the Joseph Barracks in 1887, to serve as the Town Military Command – Platz Kommando Gebaude – and the town garrison jail respectively. After the end of the war, a quick and partial reconstruction was undertaken. It was then that the ground floor arches of the building’s court facade were opened up. The 3-story, rectangular high-roofed building called the Powder House stands in the courtyard, surrounded by a moat, with robust, thick (2 meter) walls and grilled windows. The original one-storied building on the site, which at the time still stood squarely along the street line, was probably built around 1720. Its inner space originally was one vaulted, undivided, great room, which was later partitioned. It was built to store gunpowder and saltpeter. By the end of the 18th century, its function had changed. The present structure which replaced it was probably built after 1810, with a rain-gutter drip-line parallel with the street. It was used for military purposes, with thick walls offering perfect protection. Beneath, there is evidence of the remnants of several old walls, probably used to transform the building into a prison. Later the building was used for the offices of the Ministry of Finance. The complex was among very few in the Castle District that did not suffer terribly during the World War II Siege of 1944-45. Only the roofs were seriously damaged, as were those of many other houses in the neighborhood.