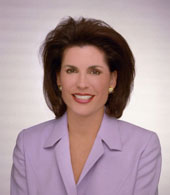 Nancy Goodman Brinker is the founder of the Susan G. Komen Breast Cancer Foundation, named after her only sister, Susan, who died from the disease in 1980. Today, the Komen Foundation is one of the nation’s largest grass roots organizations, with a network of over 70,000 volunteers, 100 staff members, and affiliate groups in over 110 cities in the United States and 3 countries. Through fundraising and the Komen Race for the Cure® series, the Komen Foundation has raised more than 300 million dollars for breast cancer research. A breast cancer survivor herself, Nancy Brinker has helped build this organization by fostering a coalition of relationships within the business community, government, and volunteer sectors in the United States.

She began her business and marketing career in 1968 after graduating from the University of Illinois and entering the executive training program at Neiman Marcus in Dallas, Texas. She later studied broadcast journalism and orchestrated programs for several public relations and marketing firms. In 1994, she founded In Your Corner, Inc., a profitable business venture designed to meet the retail consumer need for reliable health and wellness products and information. In Your Corner, Inc. was sold in 1998. Additionally, she has served as a director of several publicly held corporations including Manpower, Inc., U.S. Oncology, Inc., Netmarket, Inc., and the Meditrust Corporation, among others. She is also affiliated with several non-profit organizations and sits on the boards of the Susan G. Komen Breast Cancer Foundation, New York University Medical School, Harvard Center for Cancer Prevention Advisory Board, and the Palm Beach Fellowship of Christians and Jews.

Through her career as a businesswoman, consultant, healthcare advocate and philanthropist, Nancy Brinker has been the recipient of over 50 awards and titles, including: the Texas Governor’s Award for Outstanding National Service, the Jefferson Award for Greatest Public Service by a Private Citizen, the Salomon Smith Barney Extraordinary Achievement Award, the Ladies’ Home Journal’s 100 Most Important Women of the 20th Century, and the Champion of Prevention Award by the National Foundation for the Centers for Disease Control. In addition, she has authored two books: The Race is Run One Step at a Time, 1000 Questions About Women’s Health and has had articles published in national and international media.

Ms. Brinker was nominated by President Bush to be U.S. Ambassador to Hungary on May 23rd, 2001, approved by the Senate Foreign Relations Committee on August 1st, and confirmed by the Senate on August 3rd. She presented her credentials to President Mádl on September 26, 2001.

Nancy Goodman Brinker was born in Peoria, Illinois and has one son, Eric.

Ambassador Brinker concluded her service as Ambassador to Hungary on June 19, 2003.