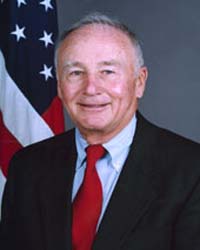 We are saddened by the news of the passing of Ambassador George Herbert Walker III, who served as U.S. Ambassador to Hungary from 2003 to 2006.  The successful businessman and philanthropist passed away on Saturday, January 18, 2020. Ambassador Walker worked hard to further strengthen relations between the U.S. and Hungary. Upon his departure from Budapest in 2006, the President of Hungary decorated Ambassador Walker with the Commander’s Middle Cross of the Order of Merit of the Republic of Hungary.  U.S. Embassy Budapest extends its deepest condolences to Ambassador Walker’s family and friends.

George Herbert Walker III was sworn in as Ambassador to Hungary on September 30, 2003.

Ambassador Walker started his business career as an investment executive at G. H. Walker & Co. in September of 1958.  He was elected Chairman of G. H. Walker Laird in 1972 before its acquisition by White Weld & Co. in 1974.  He joined Stifel, Nicolaus & Company, Incorporated in 1976 when the firm reported revenues of $12 million and a net worth of $3 million.  He was made President and Chief Executive Officer in December 1978 and Chairman in 1982.  During his tenure as CEO, the firm made many acquisitions, enjoyed a successful IPO, and its common stock was listed on the NYSE.  After his unsuccessful candidacy for Congress in 1992, he stepped down as CEO but remained Chairman.

In September 1997, he recruited senior executives from Robert Baird in Milwaukee including Ron Kruszewski to serve as CEO.  Under their leadership Stifel in 2012 has more than 1800 investment executives, revenues of more than $1.5 billion, and a net worth just short of $1 billion.  Upon his retirement from the Board in 2003, Walker was named Chairman Emeritus of Stifel.

Ambassador Walker’s interests have extended to education, politics, and civic affairs.  He served as Chairman Emeritus of the Board of Webster University and has served as a Board Member since 1974.  He served as Chairman of the Advisory Board of Webster’s Business School and Chairman of the Daniel Webster Society.  In politics, he has been active both regionally and nationally.  He served as Finance Chairman for President Nixon in Missouri in 1972 and State Finance Chairman for President Reagan in 1984.  His political activities included election to the Republican Central Committee of St. Louis County representing Clayton Township and soon thereafter election to the State GOP Central Committee.  He played an active role in both 1988 and 1992 when his cousin, George Herbert Walker Bush was the GOP candidate.

In 1992, the newly-elected Mayor of St. Louis, Freeman Bosley, invited Walker to form a Blue Ribbon Advisory Committee to guide him on budget and finance issues.  This committee, finding that the Mayor had little control over budget and finance issues due to the restrictions written into the Missouri State Constitution, modified its mission. It became Citizens for Home Rule, an effort to amend the Constitution so that voters in
St. Louis City would be given authority to change the city charter, a privilege which had been denied since the Missouri Constitution was written in 1876.  His Committee included all former Mayors of the City as well as the current Mayor.  This effort succeeded as a result of a statewide vote in November 2000.

Ambassador Walker has served as Chairman of Downtown St. Louis, Inc. (now the Downtown Partnership) and headed the Alexis de Tocqueville Society of the United Way of Greater St. Louis in 1994. He was a Board Member of the Missouri Historical Society, serving as Chairman from 1994 – 1997.  He was a Board Member of the Urban League of Metropolitan St. Louis and Commissioner and Treasurer of the St. Louis Science Center.  He was also a member of Washington University’s National Council for the Olin School of Business and a Member of the Advisory Board of the Siteman Cancer Center.  Ambassador Walker served in the Board of the International Democracy Transition Center headquartered in Budapest, Hungary.  He received the Man of the Year Award from the St. Louis Variety Club in May 2011.

In 2010 Webster University named its Business School, which currently has more than 10,000 students enrolled in more than 100 locations in the U. S. and abroad, the George Herbert Walker School of Business and Technology.

In business Ambassador Walker served on the Board of Western-Southern Life Insurance Company, and he was a General Partner of the Danube Fund, headquartered in Budapest Hungary.  He earlier served on the Boards of Macroeconomic Advisors, Inc. Laidlaw Corporation, and Lafayette Federal Savings and Loan.

Ambassador Walker was an ROTC graduate and served as a First Lieutenant and Staff Judge Advocate in the Air Force from 1956-1958.  He served as Civilian Aide to the Secretary of the Army for Eastern Missouri from 1974 – 1977.

Ambassador Walker was a graduate of Yale University (BA 1953), Harvard Law School (JD 1956), and was admitted to the Connecticut Bar in 1956.

Upon his departure from Hungary in August 2006, the President of Hungary decorated Ambassador Walker with the Commander’s Middle Cross of the Order of Merit of the Republic of Hungary, a medal similar to the one awarded earlier to his cousin, President George H. W. Bush.

Ambassador Walker is survived by his wife Carol and their 8 children and 13 grandchildren.

(Ambassador Walker concluded his service as Ambassador to Hungary on August 4, 2006.)