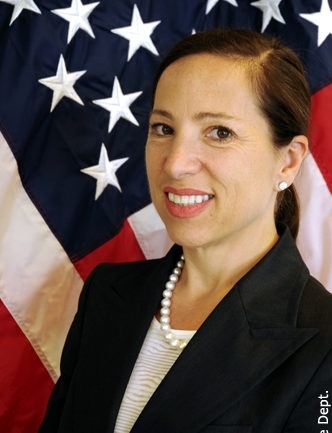 Ambassador Eleni Tsakopoulos Kounalakis was sworn in to office by Secretary of State Hillary Clinton on January 7, 2010. She presented her credentials to the President of Hungary, László Sólyom on January 11, 2010.

Before accepting President Obama’s nomination to serve as U.S. Ambassador to Hungary, Eleni Tsakopoulos Kounalakis was president of AKT Development Corporation, one of California’s largest and most respected land development firms. A prominent and successful businesswoman, Ambassador Kounalakis earned her undergraduate degree from Dartmouth and an MBA from the University of California at Berkeley. In 2011 she received an Honorary Doctorate in Law from the American College of Greece.

Ambassador Kounalakis is a staunch advocate of interfaith dialogue, and served for nearly ten years as a Trustee of the World Council of Religions for Peace. In recognition for her work with the WCRP, she was awarded the medal of St. Paul, the Greek Orthodox Church of America’s highest honor. Her appointment by the Mayor of San Francisco to serve as a Trustee of the San Francisco War Memorial and Performing Arts Center allowed her to combine her skills in business and real estate with her love of the arts.

Actively involved in civil society organizations throughout her home state of California, Ambassador Kounalakis served four times as a delegate to the Democratic National Convention and as an at-large member of the California State Central Committee. She also served as a member of the California First Five Commission, and the California Blue Ribbon Commission on Autism. She served as a Trustee of Robert Redford’s Sundance Preserve and on the Conservation Fund’s National Forum on Children and Nature. Ambassador Kounalakis and her husband have two children.

Ambassador Kounalakis concluded her service as U.S. Ambassador to Hungary on July 20, 2013.