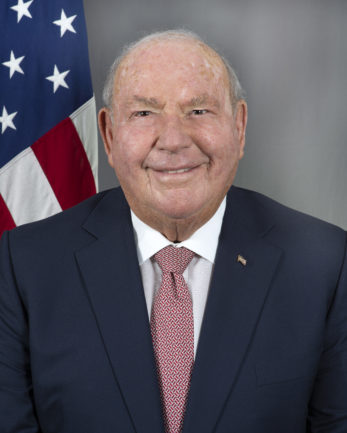 David B. Cornstein was appointed by President Donald Trump to serve as the Ambassador Extraordinary and Plenipotentiary of the United States of America to Hungary.  He was confirmed by the United States Senate on May 24, 2018 and presented his credentials to the President of the Republic of Hungary on June 25, 2018.

A lifelong New Yorker, David Cornstein has built a record of achievement as a businessman and leader.  As Chairman and CEO, he helped build over a billion-dollar NASDAQ Stock Exchange Company and, in addition, at Off Track Betting – NYC, he turned around a failing government entity where he was Chairman for 16 years to make it effective, efficient, and very profitable.

David Cornstein was named the Chairman of the New York State Olympic Games Commission to bring the 2012 Summer Olympic Games to New York City.  He has served as a Board Member of Jacob Javits Development Corporation, a member on the New York State Council on State Productivity, Board Member of Battery Park, and with Richard Parsons as Vice Chairman of the Economic Development Corporation of New York City.

For his lifelong achievements in business and public service, he has been honored as “Man of the Year” by the Juvenile Diabetes Foundation, Chemotherapy Foundation, Friars Club Foundation, and the Park East Day School, and has helped raise millions of dollars for these organizations.  He was the commencement speaker at the Stern School of Business of New York University.  He served on the Board of Directors of New York Law School, Jewish Community Relations Council, Marine Corps-Law Enforcement Foundation, and Park East Synagogue.  In the past, he served as Chairman of the World Presidents’ Organization and is currently a member of the Chief Executives’ Organization.  He is an active philanthropist through the David and Sheila Cornstein Foundation.

Ambassador Cornstein earned a Bachelor of Arts degree from Lafayette College and a Masters of Business Administration from New York University.  He and his wife, Sheila, have two children and one grandson.

Ambassador Cornstein concluded his service as U.S. Ambassador to Hungary on October 30, 2020.