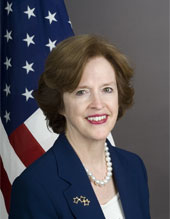 April H. Foley has had an extensive career in professional management. Most recently, she served as First Vice President and Vice Chairman of the Export-Import Bank of the US. Prior to that, she served as a member of the Board of Directors of Ex-Im Bank. She worked for 17 years as an executive for PepsiCo in roles including strategic planning, financial management, and mergers and acquisitions. She also worked for Pfizer and The Reader’s Digest.

In addition to her business experience, she has held significant volunteer leadership positions. She was Co-Chair of the Special Gifts Committee for Smith College’s capital campaign. She was a member of the Board of Directors of the CPR Institute for Dispute Resolution. She was President of United Way of Northern Westchester. She was Chairman of the Alexis de Tocqueville Society of Westchester/Putnam Counties. She was Co-Chair of the Friends of the Northern Westchester Shelter.

She holds a Bachelor of Arts Degree from Smith College and an MBA from Harvard University.

She is a widow with three children, Catherine, Giff, and James.

Ambassador Foley was sworn in by Secretary of State Condoleezza Rice on July 5, 2006. She arrived in Hungary on August 10, 2006, and presented her credentials to President of the Republic of Hungary László Sólyom on August 18, 2006.

Ambassador Foley concluded her service as Ambassador to Hungary on April 2, 2009.