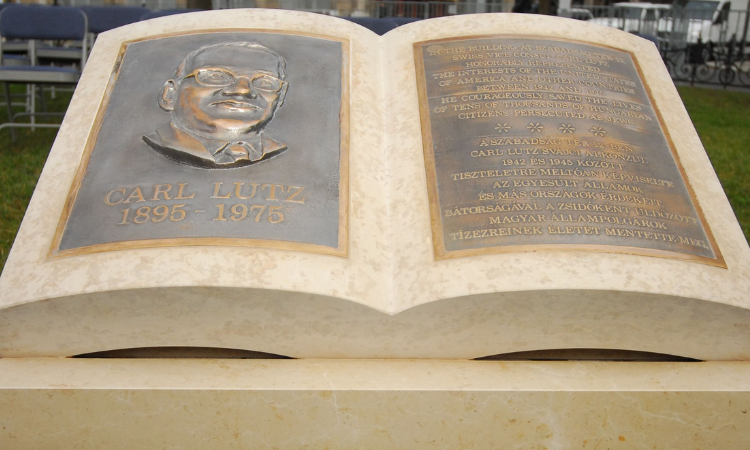 On December 13, 2006, in a poignant ceremony attended by foreign diplomats, Hungarian government officials and representatives of the Jewish community, a memorial to Swiss diplomat Carl Lutz was unveiled in the park adjacent to the U.S. Embassy at Szabadsag tér 12.

Ambassador April H. Foley in her unveiling speech noted that “few individuals during the dark times of World War II helped so many innocent people escape death,” and added that “through our common work we must ensure that there is never again a crime like the Holocaust.” Swiss Ambassador Marc André-Salamin honoring the memory of his fellow diplomat noted that Lutz had been the designer and leader of the biggest and most successful rescue operation of the 20th century. Mayor of Budapest Gábor Demszky emphasized that, without the activity of Carl Lutz, Budapest would not be the multicultural metropolis that it has become, and added that Budapest is the only capital in Central Eastern Europe where a Jewish community of more than 100,000 has survived following the Holocaust.

Carl Lutz was the Swiss Vice-Consul in Budapest from 1942 until the end of World War II in 1945. Together with diplomats of neutral countries, such as the Swedish Raoul Wallenberg, the Apostolic Nuncio Angelo Rotta, the Italian Giorgio Perlasca, and others, Lutz worked relentlessly in his office set up in the U.S. Legation building for many months to prevent the planned death of innocent people. He created safe houses by declaring them annexes of the Swiss legation and eventually extended diplomatic immunity to 72 buildings in Budapest, saving as a result of it more than 62,000 Hungarian Jews. In 1963 a street was named after Lutz in Haifa, Israel, and since 1991 a memorial at the entrance to the old Budapest ghetto remembers him. A memorial room was opened in 2005 in the Glass House in Vadász utca 29, Budapest V. He was also awarded the title of “Righteous Among the Nations.”

The inscription on the memorial reads:

In the building at Szabadság tér 12, Swiss Vice Consul Carl Lutz honorably represented the interests of the United States of America and other countries between 1942 and 1945. He courageously saved the lives of tens of thousands of Hungarian citizens persecuted as Jews.