The following is a personal reminiscence of an American who was stationed in Budapest at the time:

On the day that fighting broke out in the Hungarian Uprising of 1956, the Széchenyi Apartment Building on Széchenyi rakpart was wholly owned by the United States Government. Three Marine Security Guards, an Embassy spouse and her child were at the apartments. Mongolian troops in Russian T-34 tanks were rumbling along the rakpart, when a dull explosion was heard. Apparently Hungarian Freedom Fighters on the roof of the building had begun firing at the troops. The Mongolians turned their 50mm machine guns on the apartments, doing considerable damage and breaking most every window in the building.

One Marine was about to go on the roof and mention to the Hungarians that they might want to consider the safety of the Americans living in the apartments, but thought better of it when he realized that they would have no idea if he were friend or foe. At one point, an incendiary tracer from a machine gun came into an apartment and set a sofa on fire. The Marines were about to throw it out the window onto a tank, but someone thought better of it (as the Mongolians had yet to train their big guns on the apartments) so they threw it down into the inside courtyard away from the fighting. The Americans made their way down into the basement of the building, and when it was safe came over to the Embassy.

On November 4, 1956, a Marine Corporal and Master Sergeant, and the Air Attache, Colonel Welwyn Dallam, were standing on the stairs at the entrance to the Chancery. Cardinal Mindszenty and a Monsignor walked up to the Chancery door. Through the Monsignor, who acted as the Cardinal’s interpreter, they asked to come into the U.S. Embassy. The corporal looked at the Air Attache and asked, “What should I do sir?” The Air Attache said nothing. The corporal then looked at the Master Sergeant and asked the same question. “Do your duty,” the sergeant replied. So the corporal, who had the keys to the building, unlocked the door, and in walked Cardinal Mindszenty, who stayed for fifteen years. A few moments later, a telex arrived from Washington instructing the Embassy to extend every courtesy should the Cardinal request asylum.

During his time in the Embassy, the Cardinal took up residence in the office suite now used by the US Ambassador. He used what is now the Ambassador’s office as his salon or sitting room, and he slept in the other, smaller room to the side. The police outside the Chancery were ever watchful should he try to escape, and they ran their engines day and night, 24 hours a day, 7 days a week, just in case. 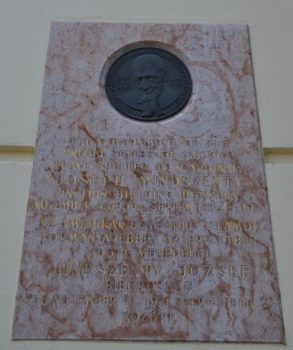 One Halloween, the Embassy had a costume party, and as some employees still wearing their masks were leaving the building that night, they were accosted by flashlight-bearing secret police who pulled up their masks, looking for the Cardinal. That was the last Halloween Party in the building.

One day the Cardinal’s “housekeeper” made her way down from the Buda Hills, across the bridge, into Pest and to the Chancery to bring the Cardinal some “baked goods.” Once inside, the package was opened to reveal the “golden chalice” of the Church. The housekeeper, I am told, was none other than the Cardinal’s mother.

“The Government of the United States of America gave shelter to Cardinal Joseph Mindszenty in this building between November 4, 1956 – September 28, 1971”