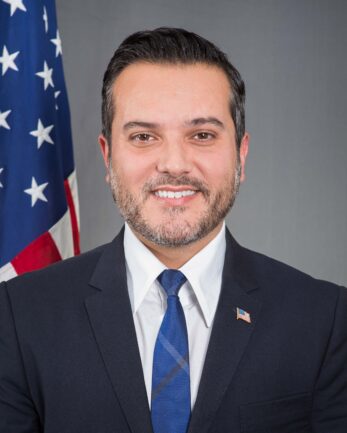 Bix Aliu arrived to serve as Chargé d’Affaires on August 10, 2022 prior to the arrival of the new Ambassador.

During his diplomatic career, Bix was detailed to Congress as a Pearson Congressional Fellow and served as a Special Advisor to the Representative of Virginia’s Second Congressional District. He also served at the Department of State’s National Foreign Affairs Training Center, where he helped shape the future generation of the U.S. Foreign Service. Prior to returning to Poland, Bix was the Deputy Chief of Mission of the U.S. Embassy in Montenegro, where he often served as Chargé d’Affaires, a.i. Bix has represented U.S. interests abroad in Albania, Macedonia, Montenegro, Poland, and the UAE.

Bix has received numerous State Department Awards, including seven Superior Honor Awards, six Meritorious Honor Awards, and Senior Foreign Service Performance Awards. Bix is a two-time nominee for the James Baker Deputy Chief of Mission Award. He was selected as a member of the inaugural class of Colin Powell Fellows, a program for select Foreign Service Officers who demonstrate inspiring qualities of excellence and leadership. In 2008, the Albanian-American community of Chicago chose Bix as “Person of the Year.” In 2014, he was featured as one of the top 150 Albanian-American Success Stories among the Albanian-American Community in the U.S. In 2019, the Mayor of Krakow decorated Bix with the Honoris Gratia Medal, the city’s highest honor, for his significant advancement of economic and cultural ties between the United States and Krakow as Consul General.

A native of Chicagoland, Bix holds a Medical Degree from the University of Kosovo School of Medicine and a Master of Strategic Studies Degree from the U.S. Army War College. He speaks fluent Albanian, Montenegrin, Macedonian, Serbian, and Polish, among others. Bix is married and has two children.