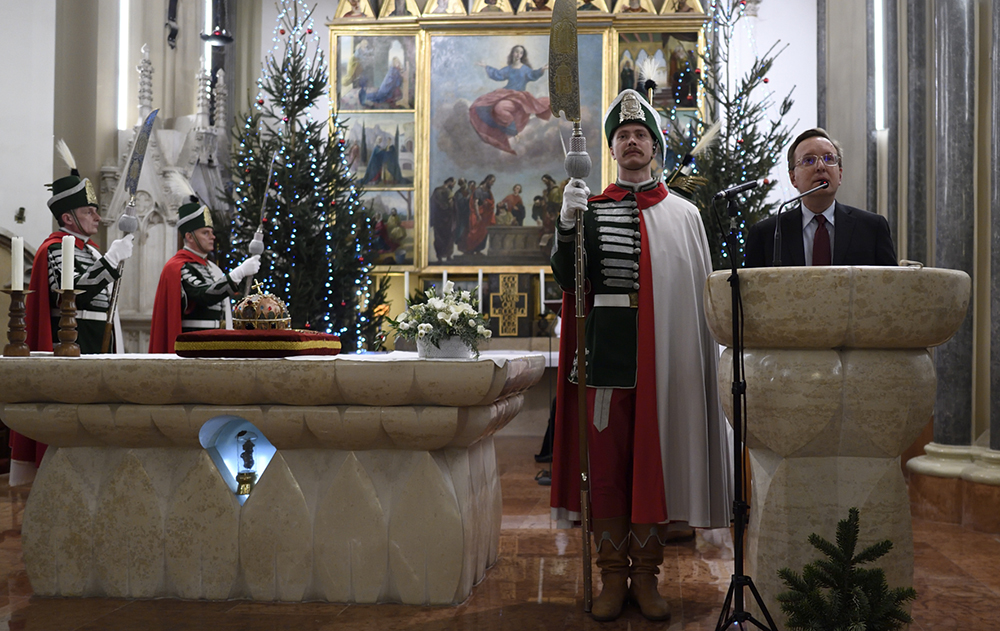 Chargé Kostelancik delivers his remarks at the ceremony.

on the occasion of

It is my great pleasure to join you here today to represent the people of the United States of America as we commemorate the fortieth anniversary of the return of the Hungarian Holy Crown to the people of Hungary on January 6, 1978.

The decision to return the Crown was a landmark moment of cooperation in U.S.-Hungarian relations, helping to melt some of the Cold War divisions between our nations and creating a pathway to the friendship we enjoy today.

The determined and steadfast Hungarian people have survived and thrived through many hardships, secure and unified in your identity.  This stems in large part from a shared acknowledgement and abiding respect for the efforts of Hungary’s first king, St. Stephen, and the world now recognizes the Crown of St. Stephen as one of the most important symbols of Hungarian history and nationhood.

You know your history well and understand how history shapes who we are today.  We all know of the tensions that existed between our nations during WWII and during the Soviet domination of Hungary.  But by the early 1970s, there were openings, possibilities for a fresh start, and we started to work through some of the most complicated issues.  By 1977, we had laid foundations for new links between our nations through exchanges in science, technology, and culture.  In fact, it was in the late 1970s that the first Fulbright scholar exchanges between Hungary and the United States fulfilled the program’s goals of building mutual understanding through person-to-person exchanges.

In the spirit of supporting and building upon this budding trust, the United States recognized the need to return St. Stephen’s Crown to the people of Hungary.  The decision marked a unique opportunity to encourage friendship and cooperation in many aspects of the relationship between our countries.  This is perhaps best illustrated in a quote from then-Ambassador to Budapest, Ambassador Kaiser, who said, “After the crown returned, I was a very popular guy.  No ambassador in a communist dominated country had an easier and happier time than I had subsequently.”

Many diplomats from that time note that the decision to return the Holy Crown and the goodwill it engendered encouraged other burgeoning reforms and changes.

Today, we join the Hungarian people in celebrating the return of the Crown of St. Stephen to Hungary forty years ago.  Our countries continue to benefit from the vibrant friendship this event helped to create.  More and more, the people of Hungary and the United States are bound together, engaging in professional and academic exchanges, in flourishing trade and economic interactions, and in international collaboration.  Our relationship is strong, vibrant, and like the Holy Crown, everlasting.

Forty years ago, then-Secretary of State Cyrus Vance and Ambassador Kaiser stood in the grand rotunda of Parliament to witness the return of the Crown of St. Stephen to the people of Hungary and the start of a new dawn in our bilateral relations.  Today, on behalf of the people of the United States, I join you in remembering that shining moment, celebrating the warm relationship we enjoy today, and continuing to build an even brighter future together.