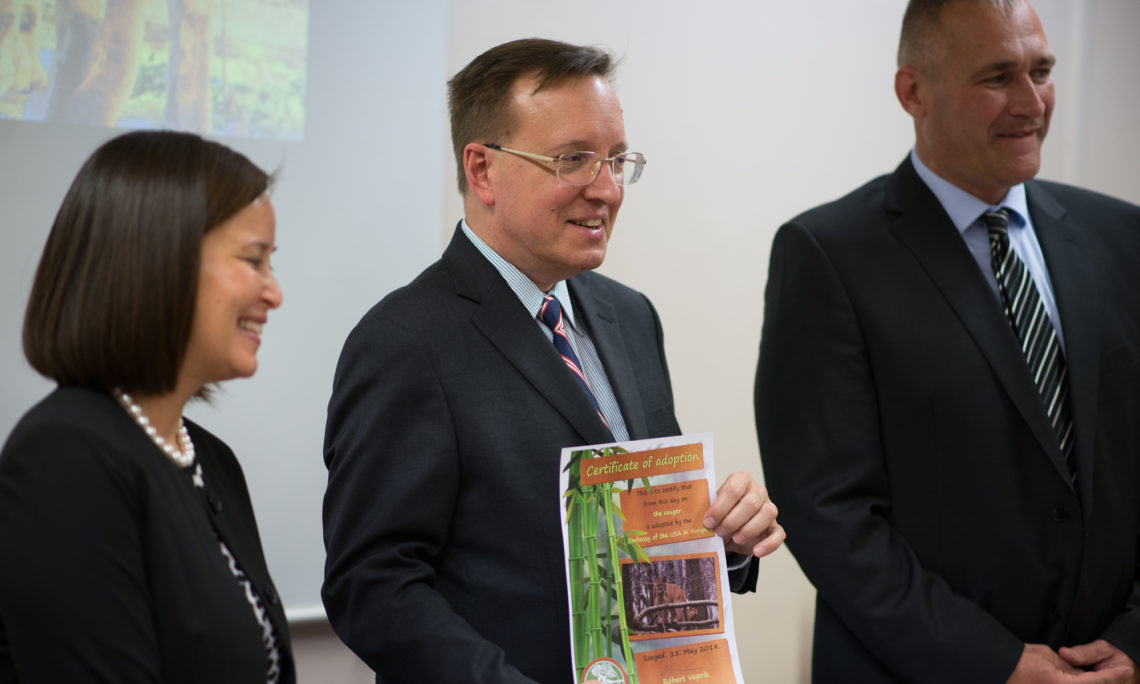 Deputy Chief of Mission David Kostelancik spent a very busy and colorful day in Szeged on May 15, 2019. He not only met with leaders of the local government, scientific community, and academia, but also adopted a cougar in the Szeged Zoo on behalf of the Embassy.

Mayor Laszlo Botka received DCM Kostelancik in City Hall for a meeting where they discussed developments in the prominent southern Hungarian city over the past couple of years.  The DCM also thanked the mayor for his ongoing support for the American Corner Szeged.

DCM Kostelancik then attended the inauguration ceremony of a new laser system developed in cooperation with ELI-Alps, which will provide research opportunities in various fields of scientific and industrial applications. French Nobel laureate Gerard Mourou was also present to introduce a new research project to shorten radioactive life span of nuclear waste, which he is heading with American scientist Toshiki Tajima.

To highlight our support for nature conservation and counter-wildlife trafficking DCM Kostelancik adopted a rescued cougar in the Szeged Zoo and now a small plaque cites support from the Embassy of the United States in Budapest.

Cougars are the largest of the small native cats in the Americas, and also have the widest range of any wild animal throughout all of that area. Human development and infrastructure growth have greatly reduced their population in the United States, where they are protected under the Endangered Species Act.

The female cougar adopted by the Embassy was rescued by the Szeged Zoo after being held in illegal captivity, and fortunately the Zoo has the experience and the capacity to shelter endangered animals and provide them with a safe new home.

“With this ceremonial adoption, I would like to express our thanks for the important work that Hungarian law enforcement, animal health authorities, and ZOOs play in combatting wildlife trafficking and protecting endangered species.” – DCM David Kostelancik

The U.S. Embassy has been cooperating with Dr Róbert Veprik, the Director of the Szeged Zoo, for several years. During earlier visits, our Embassy had a chance to learn about the quarantine facilities of the Szeged Zoo, which often shelters birds, reptiles, and small mammals confiscated from smugglers and illegal owners.  The zoo’s experts have played an instrumental role aiding customs authorities during the seizure of endangered animal species in Hungary.

In Budapest, we are fortunate to have the Government of Hungary’s support for the International Law Enforcement Academy (ILEA), funded by the U.S. State Department.  It provides law enforcement training to regional authorities on many different subjects, including environmental crimes like wildlife trafficking. In May 2019, the fourth wildlife trafficking course will be held for Central Eastern European customs and border officials, and taught by the U.S. Fish and Wildlife Service and Department of Justice colleagues.

Closing the Szeged visit, Mr. Kostelancik met with Vice Rector Dr. Peter Zakar of the University of Szeged and Judit Gera, Director of the American Corner Szeged. The DCM thanked the university for its generous support for the American Corner and also for the Fulbright Program. Szeged, being an important educational center in Hungary, has provided excellent participants for many U.S. exchange programs, including the prestigious Fulbright Program.

The American Corner Szeged is the newest addition to the existing American Spaces in Hungary. It is located at Albert Szent-Gyorgyi Agora Community Center, which houses several STEM-related labs, exhibitions, and programs giving the Corner a special focus on science, technology, and entrepreneurship. The space is equipped with top-quality devices, including a 3D printer. For more information about events there, visit the American Corner Szeged Facebook page.

Thank you, Szeged, for this wonderful, event-packed day! We will be back!