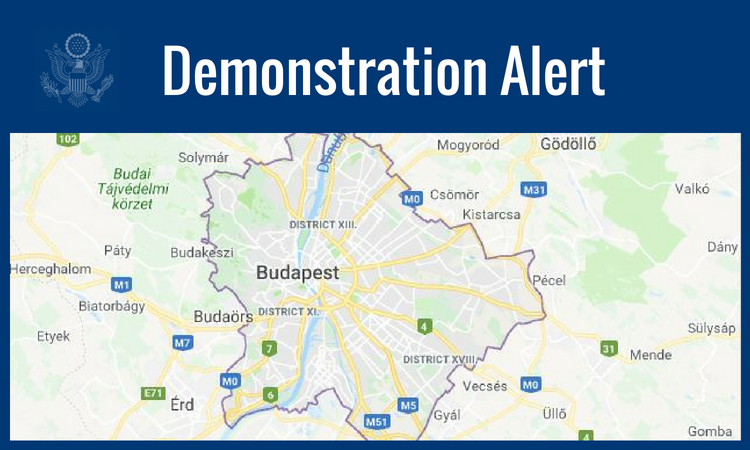 Event: The U.S. Embassy would like to inform you of the following events taking place on March 15, 2022:

As many as 100,000 people are expected to gather at Elvis Presley Park in District 2. They will march through the streets of Árpád fejedelem útja to Bem rakpart to Gyóni Géza tér to Lipthay utca across Margit híd to Szent István körút to Bajcsy Zsilinszky út to Alkotmány utca, ending at Kossuth Lajos tér (in front of the Parliament building). The marchers will join another large crowd gathered at Kossuth Lajos tér for a speech by the Prime Minister.

Crowds of more than 100,000 people will gather at Kossuth Lajos tér (in front of the Parliament building) to hear the Prime Minister deliver a speech.

A crowd of approximately 10,000 supporters of the Opposition political alliance will gather at Március 15. tér in District 5. They will march through the streets of Belgrád rakpart to Fővám tér across Szabadság híd to Szent Gellért tér to Budafoki út to Bertalan Lajos utca, ending at Műegyetem rakpart.

A group of approximately 1,000 supporters of independent party politics will gather at Széll Kálmán tér in District 2. They will march through the streets of Margit körút across Margit híd to Jászai Mari tér to Széchenyi rakpart, ending at Markó utca in District 5.

A group of approximately 1,000 supporters of Mi Hazánk (My Homeland) movement will gather at Múzeum utca in District 8.

Approximately 50 people will gather at Egyetem tér in District 5 for an anti-vaccine demonstration.

Approximately 25 supporters of the Opposition political alliance will gather near Kapisztrán tér and Bécsi kapu tér in District 1.

Avoid large crowds and areas where demonstrators are gathering.

Comply with directions from local authorities.