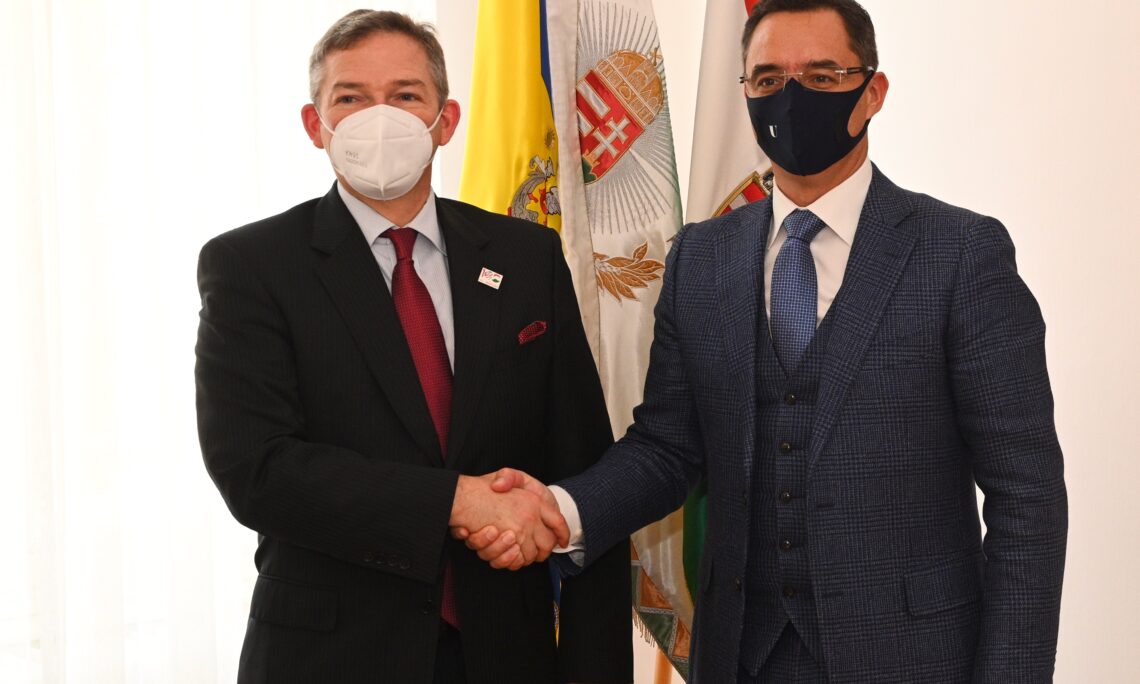 Chargé Marc Dillard with the mayor of Debrecen, László Papp

Visiting all parts of Hungary is an important part of the work of the current head of mission, Chargé d’Affaires Marc Dillard, and with more than a year since his last visit to Debrecen, CDA Dillard reconnected with Debrecenites this week.

“Debrecen has great energy, and many U.S. connections,” CDA Dillard told those he met with, which included Mayor László Papp. The two discussed current topics, including the pandemic’s impact on Debrecen’s economy and points of collaboration between Debrecen and America. CDA Dillard met with Democratic Coalition MP Zoltán Varga, originally from Debrecen, as well.

While in town, CDA Dillard also met with the U.S. Short Track Speedskating Team, participating in the ISU World Cup Short Track Olympic qualifying competition. At a meeting on the grounds of Debrecen University, Rector Zoltan Szilvassy and CDA Dillard agreed that educational exchange programs benefit all, and the CDA thanked the University for being a host institution for many American Fulbright grantees over the years. Both also encouraged scholars and students to apply not only for Fulbright, but other exchange programs such as the Study of U.S. Institutes or the Summer Work Travel Program. During a Q&A with American Studies students at the university, Chargé Dillard talked about studying in the United States, and discussed the concept of American identity.

In his interview with Debrecen TV CDA Dillard talked about next steps after COP26, U.S.- China economic ties, and the longstanding relationship Debrecen has had with the United States. The Chargé also met with representatives of Debrecen-based NGO Association for Alternative Communities (Alternatív Közösségek Egyesülete), who detailed their diverse efforts to promote active citizenship among youth.

Chargé Dillard’s short trip to Debrecen concluded with a lab visit in the ATOMKI Institute for Nuclear Research where he learned about bilateral research using the facility’s premier particle accelerator and discussed ways to deepen ATOMKI’s relationships with U.S. research institutions. CDA Dillard’s Debrecen trip highlighted the longstanding and diverse points of cooperation between the people of Hungary and the United States.