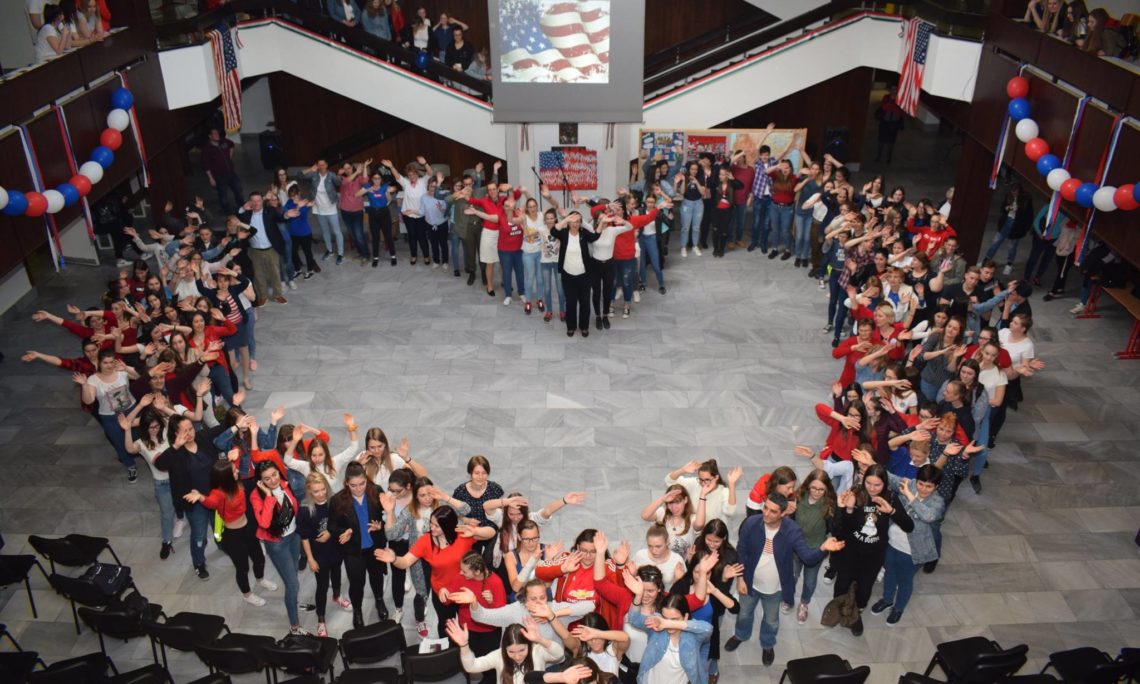 As one of the three high schools annually awarded the opportunity to organize an America Day, Szentgyörgyi Albert High School in Kecskemét did an exceptionally great job on March 26, 2019!

Public Affairs Counselor James Land, guest speaker of the U.S. Embassy Budapest, was impressed by the level of creativity and enthusiasm both by students and teachers. He was especially happy to see students actively engage with and enjoy American culture while using 21st century technology and teamwork.

Hungarian high schools are invited to apply to organize an America Day, a joint initiative by the U.S. Embassy Budapest and the Hungarian Ministry of Human Capacities, where students may learn about American culture and study opportunities from native speakers and by interactive programs. How to apply >>

From the wide-ranging program offer it is obvious that everyone involved put a lot of thought and energy into this event and we congratulate the school on this commitment and enthusiasm!

Here are five program elements, described by the organizers, that we think are wonderful ideas to model and think about for America Days, and may also spark some thoughts for use in ESL classrooms.

The goal of the Native American Culture themed escape room was to get out of the room within 30 minutes by discovering a code. During the various puzzles, participants learned about Native American symbols, tales, native plants, and could get closer to the religious beliefs of Native Americans.

Six classrooms represented five major cities in the United States (Seattle, Los Angeles, San Francisco, New Orleans, New York, and Washington, D.C.) and Alaska. In the rooms, not only were student-made posters exhibited, but also many objects and mock-ups were there to freely touch and play with, keeping the focus on interactivity. In addition to traditional paper-based tasks, puzzles, pairing games, and quizzes, we were keen to incorporate 21st century technology. For example, in the New York and Washington, D.C. rooms, students solved Kahoot! quizzes (the use of smartphones was allowed), and they made word clouds based on a virtual visit to the city.

Mockups were waiting for visitors in the San Francisco room: you could cross the lit up Golden Gate Bridge swallowed by fog, walk around Alcatraz Island and take a virtual tour on Lombard Street. We got to know the main sights from the PowerPoint presentations made by the students. With the help of the puzzle and quiz, visitors could test how much they learnt about the city.

In the New York room, students had to recognize skyscrapers and pair them with their blueprints, and then solve some crossword puzzles. In the Washington, D.C. room, visitors were welcomed by a video presentation, and they had to pair well-known sights with corresponding funny descriptions.

In the Seattle room, we laid down tango dance steps to mirror real-life bronze dance steps found in the Capitol Hill neighborhood, and people would gain points by following the steps and learning how to dance tango. Since Seattle is also the home of grunge music, participants had to prove that they could play a Nirvana song perfectly on Guitar Hero.

In Alaska, freezing cold awaited visitors who had to solve creative tasks, build Alaska-related objects with LEGO bricks, choose which animals are native to Alaska from a set of plush animals, and also try to learn the correct folding of the American flag based on a video.

In the Los Angeles room, participants had to solve jigsaw puzzles of actors, act out movie titles, and recognize soundtracks.

In the New Orleans room, besides reliving the bustle of the Mardi Gras festival, visitors could go on a trip to the world of jazz, listen to live music, and try their hand at playing the clarinet.

The students’ poster exhibition on the aspects of American life was accompanied by a Quizziz quiz.

Backyard events were also very popular: thanks to a local collector, three original American-made cars were exhibited (Dodge Charger, Ford Mustang and Tesla). Students could sit in the cars and listen to the purr of the huge engines. Answering our open invitation on Facebook, three bikers arrived on their Harley-Davidsons and they were excited to share their love for their bikes with us. Students took countless selfies sitting on the motorbikes!

We finished the day with a flash mob, a symbolic community experience: participants gathered in a huge heart shaped formation – but what really brought the formation to life was the school’s dance-loving students, who were leading the choreography for participants to follow and bringing the “heart” to life. Meanwhile, we cheerfully sang “Álmaimban Amerika visszainteget!”(the slogan of the program based on a pop song)

At every America Day, an Embassy speaker offers insights into life as a diplomat and the work of the U.S. Embassy. For this event, Public Affairs Counselor James Land gave a lively and informative presentation on these themes, followed by a vivid question and answer session with the approximately 200 students in the audience. At first a bit shy around the diplomat, after some small talk the ice broke, and the students were extremely enthusiastic over the rest of the day.  Mr. Land also took part in several activities, including the “Taste of America” food contest and the escape room.

“As an American and as a diplomat I am very happy to see these innovative educational methods to learn about the United States. I believe it is important to learn about other cultures for better understanding.” – James Land, PAO

Fulbright scholar Kayla Etherton also delivered a lecture on the higher education system as well as education opportunities in the United States, which provided an excellent chance for students to get first-hand information on studying abroad.  While EducationUSA resources and advisors in several centers in Hungary are available to provide up-to-date information, in this setting kids could ask questions locally and directly while practicing their English skills.

Besides Mr. Land, teachers and local government officials all evaluated the event extremely positively and a great success.

“On this day students could get such knowledge about English language that shows it’s not only a subject, but a communicational channel as well.”  – Chancellor of Kecskemet Educational Centre Leviczky Cirill