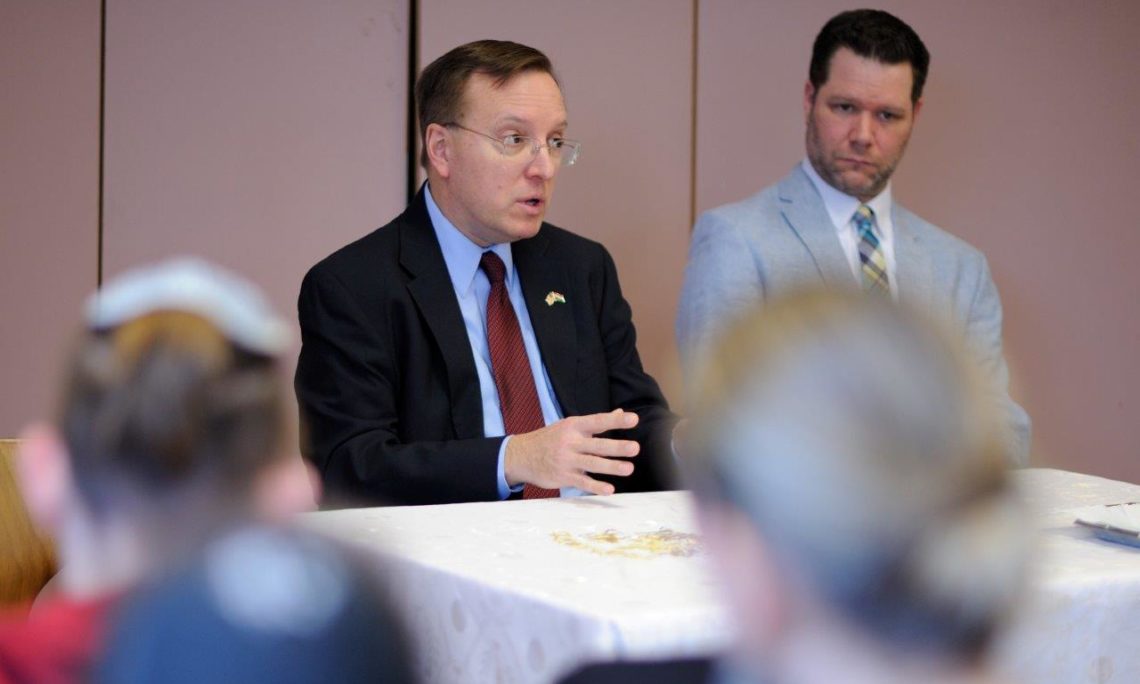 Published in Hungarian on February 9, 2017

Interim Chargé d’Affaires David Kostelancik is leading the U.S. diplomatic mission to Budapest in cooperation with his Washington superiors until the new Ambassador arrives.  According to him, the U.S. pays attention to civil organizations and as he sees the current policy is that the anti-Moscow sanctions must be maintained. Hungarian-American engagement, however, may be higher level than before.

The last time an interim Chargé d’Affaires was at the helm of the U.S. mission an entire country learnt the name of André Goodfriend, who stood out with his lively activity.  Is this normal for a Chargé, or can we count on a more restrained role from you?

I am continuing the work started by Ambassador Bell so as to improve our relations with the GOH and the Hungarians.  As Chargé I take my instructions from Washington, and during my work I cooperate with my authorities there.  Part of my job is to obtain information from the papers, from television, [and] to talk to Government and opposition politicians, Members of Parliament and members of civil society.  To understand what’s happening in Hungary, and according to my best knowledge, inform my colleagues in Washington about that.

There must be plenty of reasons for consultations as there is a lot of criticism of the Orban government because of actions against civil organizations as well as because of the changes implemented in the media.   As a friend and ally, the U.S. can warn Hungary if it sees fit, right?

Cooperation is strong in several areas, and has strengthened recently.  That said, I know that the United States and Hungary have had some discussions about certain issues that have involved media freedom, the NGO community, civil society. The principle of supporting press freedom and civil organizations has not changed, and on the U.S. side has not been altered just because there was a new government formed in Washington.  I’d like to remind that the U.S. and its partners in the 1999 Istanbul Summit signed the European Charter for Security in which they committed to respecting the freedom of civil society, of NGOs and of the media.  At that time, the document was signed by Bill Clinton on the U.S. side, and by Viktor Orban on the Hungarian side.  Those commitments remain on the part of both of our countries, and there are times when, as a friend and with respect, we have discussions with the Hungarian government on these issues. The diplomatic dialogue can help a lot, and will certainly be maintained with the Government on these issues.

The GOH is hoping that it will have a better relationship with the administration of the Republican Donald Trump than it had with Barack Obama’s Democratic one.  Is that expectation based on reality?

As regards personnel changes due to a change of administration, I have plenty of experience, having experienced five so far during my diplomatic career.  Basically, this one is not different from the previous ones, new people with new ideas, with different backgrounds, come to Washington and take a look at our foreign relations and our commitments in the world.  Prime Minister Viktor Orban, Foreign Minister Peter Szijjarto and the other members of the Government are well-known in Washington, as we’ve been engaged with them for years in various areas.  Washington will review the relationship with Hungary, and will consider a higher level of engagement than before.  One thing is certain: cooperation will remain in the fight against terrorism, in law enforcement, in strengthening business relations or in the cultural area.  And we will continue to share our advice and thoughts with our Hungarian hosts.

In the State Department you were the head of the Russia office, you have served as a diplomat in Moscow, so you are in a position to form an opinion about the criticism according to which Hungary has gotten too close to Russia.  President Vladimir Putin has just visited in Budapest.  Orban and Szijjarto are talking about lifting the sanctions, and then there is the reactor construction in Paks.

Hungary has every right and responsibility to build constructive relations with its neighbors and other countries.  Hungary is an ally of the U.S. in NATO, and its partner as a member of the EU, which latter has decided about the sanctions.  President Trump has stated it would be too early to talk about lifting the sanctions, especially in relation to the illegal annexation of Crimea and the assistance provided for the rebels in Eastern Ukraine.  We have long been supporting Hungary in the diversification of its energy imports, and we also recognize that the trade with Russia is important for the country.  But we see no ground for lifting the sanctions as the causes because of which they were implemented still prevail.  Speaking about the Paks investment, as far as I know the EU investigation has not been concluded yet.  And as regards the agreement on it, the most important thing is that it should be transparent in the largest possible degree.

Speaking about transparency, corruption is often mentioned with regard to Hungary.  Is corruption still an issue coming up in the bilateral diplomatic dialogue?

Resolving the question of corruption is up to the Hungarian government and the Hungarian people, and steps to that effect may influence foreign investors’ confidence.  The United States has expressed its concerns regarding corruption both publicly as well as privately.  We did that as friends.

The life of a diplomat cannot be easy serving under a President who can be described as unorthodox.  In the State Department the travel ban on citizens of seven Muslim countries met with a strong resistance.  The communication channel reserved for dissenting opinions, known as the dissent channel, was virtually ablaze.  What is the dissent channel exactly?

The dissent channel has existed for more than 45 years within the Department of State.  This is an internal forum that does not exist at any other Department, where those working in the State Department or in the Foreign Service can express their opinion and advice to the head of the State Department sincerely, by giving their names without the danger of retaliation.  The Secretary of State is obliged to answer the questions raised.

But it still sounded frightening when White House spokesperson Sean Spicer said those who disagree with the administration’s foreign policy are free to quit.

Foreign Service employees pledge allegiance to the U.S. Constitution and it is their duty to defend it, as well as to signal to their leader what their views are in important matters.  The dissent channel is of confidential nature, but it can happen that there are leaks from it, as it happened in the case of Bosnia or the war in Iraq.  State Secretary Tillerson has said that he is aware of the dissenting opinions within the State Department, that he respects those and wants to hear them.  But once the Secretary or the President makes the decision on a given issue, that decision must be implemented by State Department employees and diplomats.