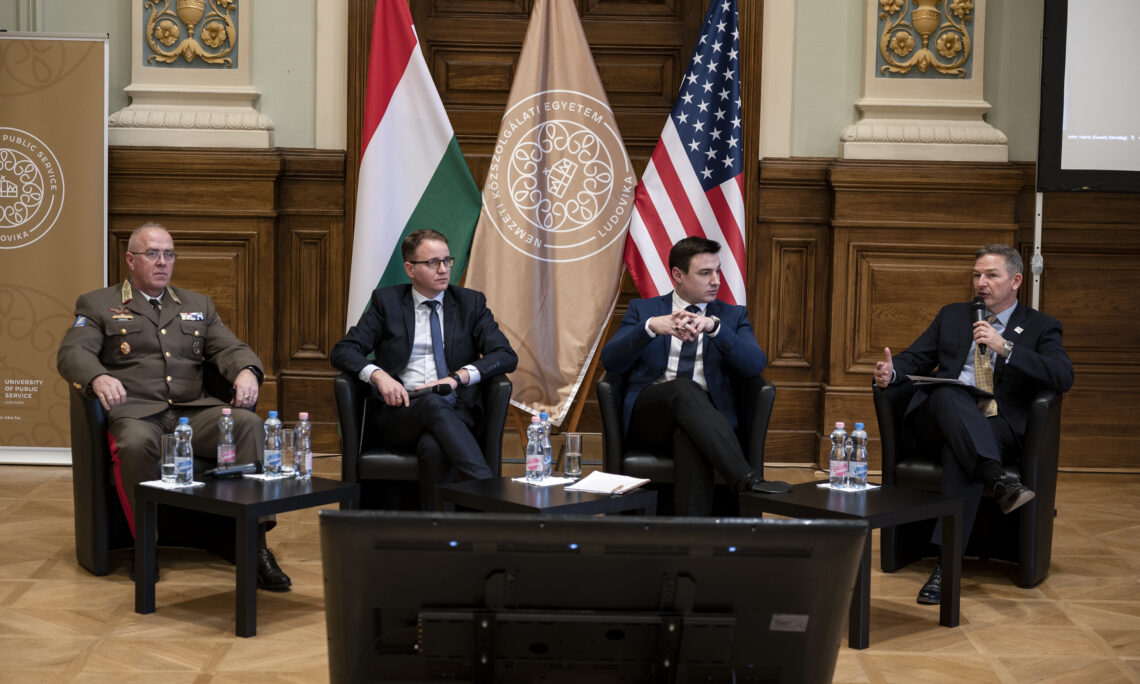 To commemorate the 100th anniversary of diplomatic relations between the United States and Hungary, Chargé Dillard together with Ambassador Breuer, Dr. Nemeth, Major General Sandor, Dr. Martonffy, and Ohio National Guard Adjutant General, Major General John Harris, participated in a lecture and photo exhibit at Ludovika. Titled “U.S.-Hungarian defense relations: past, present, and future,” the event showcased defense and military cooperation with a photo exhibit and a lecture and panel discussion. Chargé Dillard expressed his appreciation for the strong military connection in our bilateral relationship. Our defense and security cooperation and our connection as NATO allies are vital elements of our relationship that contribute to our shared security, and our future.

State Secretary Szabo, Ambassador Breuer, Dr. Nemeth, and MG Sandor, Dr. Martonffy, ladies and gentlemen, it is an honor to join you today. I am glad we can gather to mark this milestone 100th anniversary of formal diplomatic relations between our two nations.

Like any long and enduring partnership, ours has had its ups and downs.  It is no secret that our administrations do not see eye-to-eye on some issues today.  However, our security partnership remains as strong as ever, and I think that is an important fact to keep in mind when we discuss American and Hungarian relations more broadly.

Because security and defense relations are at the core of our societies.  Defense of our countries and protection of our peoples is one of the primary purposes of government.  And undertaking that defense requires a commitment that spans the breadth of our societies: from institutions and infrastructure to politics,  policy, industry, technology, education, and foreign affairs.  That commitment takes a budget to make it operational and a set of values to keep it on course.  This is a commitment both of our countries have undertaken and implemented together through the NATO alliance.

I saw this myself while flying over the Danube River in 2019 on a CV-22B Osprey, which was in-country as part of Trojan Footprint shortly after my arrival. For me, that moment was about much more than the flight—although that was unforgettable. For me, that experience showed how we partner and train together, on a very real and meaningful level; side by side, on land and in the air.

During my visits to Strategic Airlift Capability at Papa Airbase, and to Szolnok and Kecskemet Air Force bases, I have been impressed with the high level of preparation, cooperation, and training aimed at providing critical support for NATO operations. I have heard the pride in the voices of Hungarian pilots who have participated in Baltic Air Policing alongside their NATO colleagues.  Similarly, I have seen the satisfaction of Ohio National Guardsman in their joint training with the HDF, and have heard admiration from American service members who served shoulder-to-shoulder with Hungarians in Iraq and Afghanistan. There is a connection between our men and women who protect our countries; we are partners in the genuine sense of the word.

Of course, there is a long history behind this partnership.

Looking back to America’s earliest days as a country, Hungarians have stood with us, including in our military. One of the fathers of the U.S. cavalry was Mihály Kováts, a Hungarian cavalry officer who served in the Continental Army during the American Revolutionary War. (One of my ancestors served in that war, as well, and I have to wonder if they ever stood on the same battlefield.)

The story goes that when Kováts wanted to join up with Washington’s army, he sent a letter offering his sword to Benjamin Franklin – our country’s very first diplomat — Kováts articulated his values by writing: “Golden freedom cannot be purchased with yellow gold.” Faithful until his death at the Siege of Charleston, Kováts trained and led some of the finest cavalry in the American Revolution. His words foreshadow the way our countrymen hear a similar call to serve today, rooted in their shared love of freedom and liberty.

So it is no surprise that Hungary rushed to join NATO after the fall of the Iron Curtain.  Having had their freedom denied them for more than 40 years by the Soviets, Hungarians knew their future must lie with the West.

In the region today, NATO has been the cornerstone of an unprecedented period of peace and prosperity.  As President Biden said in June 2021 during his first visit to Europe, “Our Alliance is the strong foundation on which our collective security and our shared prosperity can continue to be built.”

Hungary continues to play a key role in the Alliance.

The United States will never forget that Hungary and our other NATO Allies stood by us following the terrorist attacks of September 11, 2001, invoking Article 5 for the first and only time in the Alliance’s history. We honor the sacrifice Allies and partners have made in Afghanistan, including the loss of seven Hungarian soldiers during the course of the mission there.

We appreciate the help of the Hungarian Defense Forces in evacuating some of the more than 120,000 people brought out of Afghanistan in August, including dozens of American citizens that we received here in Budapest.

And we congratulate Hungary for taking on the command of the KFOR mission in Kosovo, a momentous responsibility.

Looking at the future of our military cooperation, our renewed Defense Cooperation Agreement – and the Implementing Agreements we are concluding to operationalize it – reflect new realities in defense.  And with Hungary’s ambitious modernization of its military, we stand together better prepared for whatever the future might bring.

Today, that is very important.

In recent weeks, Russia has stepped up planning for potential military action in Ukraine, including positioning tens of thousands of additional combat forces near the Ukrainian border.  NATO is our primary deterrent to another Russian effort to redraw international borders by force.  While we hope the Russians will de-escalate, we must both be prepared for any eventuality.

A strong alliance and a strong Europe are vital to our collective security and prosperity, and much of what we hope to accomplish globally depends on working together.

As I noted at the beginning of these remarks, efforts to defend and secure our countries are at the core of our societies and our governments’ responsibilities. Our cooperation in this sphere is as important as anything we do, and it is anchored in values that transcend this generation, as seen in Mihaly Kovats’ love of liberty and freedom.  Thanks to all of you in this room who play a part in forging these bonds and strengthening our collective security.