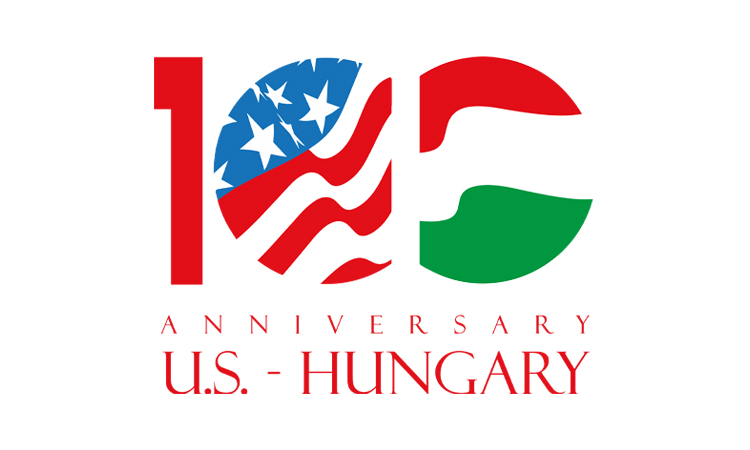 This year we commemorate the 100th anniversary of diplomatic relations between the United States and Hungary.  While our historical and cultural connections span a much longer period, the establishment of diplomatic ties in 1921 formalized the enduring bonds between our countries.  In that spirit, please join us as we pay tribute to a century of diplomatic ties by looking at what Americans and Hungarians have accomplished together, and what more we can do in the next 100 years.  We have much to celebrate. Ünnepeljük együtt ezt a jeles évfordulót!

The National Bank of Hungary has minted a beautiful commemorative coin to mark the historic anniversary of 100 years of diplomatic relations between the United States and Hungary.  Chargé d’Affaires Dillard was honored to be present at the unveiling of an exemplar of the coin by National Bank Deputy Governor Patai and to commemorate the historic ties between Hungarians and Americans.

”This year we mark the hundredth anniversary of diplomatic relations between the U.S. and Hungary, and our military and security cooperation is an important part of that relationship.  Hungary’s role as a NATO ally is deeply appreciated and helps ensure continued freedom across Europe for the continent’s more than 446 million residents.”

Witches, ghosts, pirates, and multiple Batmans gathered on October 30, celebrating Halloween at our Runoween event. Participants, including USG alumni, members of our Marine Security Guards, families with kids, and even dogs, completed a 5K run at Margaret island, wearing Halloween costumes, and received a beautiful medal, commemorating 100 years of diplomatic relationship between the U.S. and Hungary.

The United States and Hungary have exchanged nearly 4,000 students, scholars, and researchers since the Fulbright program began in Hungary in 1978. Chargé d’affaires a.i. Marc Dillard delivered a keynote address at the celebration event highlighting this important bilateral connection.

The U.S. Embassy held a Runathon in honor of 100 years of diplomatic relations between Hungary and the United States. Participants could run or walk one of our routes in Budapest, Debrecen, Pécs, Szeged, or Veszprém, and discover some of the emblematic places that connect our two countries. The stops we included highlighted our deep historical and cultural ties, going back well beyond 100 years. We are proud of all that we have accomplished together and look forward to the next 100 years of friendship. Have fun and share a selfie with us using the #USAHungary100years #EgyesültÁlmok100 and #HUSA100 hashtags!

We celebrated the 100th anniversary of U.S.-Hungary diplomatic relations with some cultural programs this summer!  American jazz artist Eddie Metz Jr. performed live in Kecskemet on August 6 and 7th at the Jazz Capital Festival, celebrating this uniquely American style of music and what this genre means to our relationship. https://jazzcapital.hu/

Highlights of the 100 Years

The United States and Hungary signed a treaty establishing friendly relations on August 29, 1921. It entered into force on December 17.

The U.S. Legation was established in Budapest on December 26, 1921, with Commissioner Ulysses Grant-Smith as Chargé d’Affaires pro tempore. Grant-Smith presented his new credentials on January 24, 1922, and served until April 28.

Count Laszlo Szechenyi presented his credentials as Hungary’s first Minister to the United States on January 11, 1922. He served until March 31, 1933.