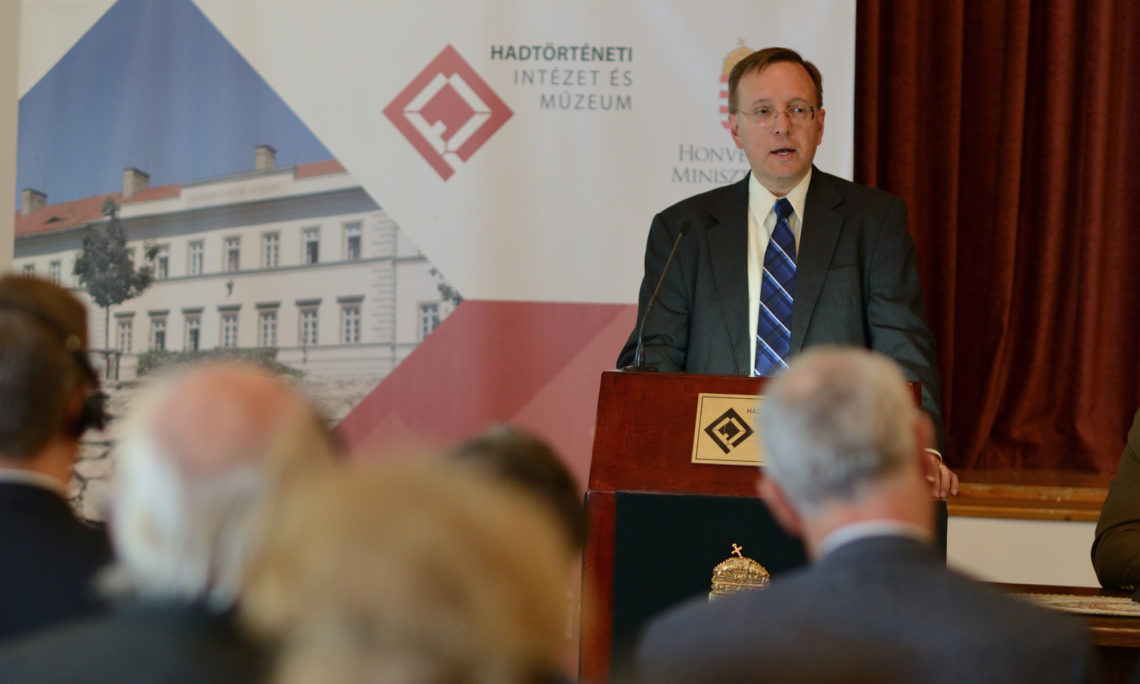 Remarks as delivered by
Chargé d’Affaires, a.i. David Kostelancik
at a Conference in honor of Tadeusz Kosciuszko
Co-Hosted with the Polish Institute, the Polish Embassy and the Institute of Hungarian Military History

Jó napot kivánok!  Thank you very much for the kind invitation to join you today to reflect on the legacy and many talents of Tadeusz Kosciuszko.

The United States of America celebrated its 241st anniversary this year, a testimony to the enduring vision and wisdom of those brave men and women who founded our country, inspired by the ideas of our Declaration of Independence, which states:

We hold these truths to be self-evident, that all men are created equal, that they are endowed by their Creator with certain unalienable Rights, that among these are Life, Liberty and the pursuit of Happiness.

And 240 years ago, those ideals inspired General Kosciuszko to make the long journey from Europe to the New World, to fight for American  independence with alongside George Washington.  Kosciuszko fought tyranny all of his life, and even after his death — in his will’s provisions to free slaves and educate them.

General Kosciusko’s thinking and his zeal for human rights, freedom, and representative government grew as much from his military training as from his exposure to the arts and the humanities, including painting and sculpture.  This is the role of the arts – to inspire and articulate bold visions.  No doubt his study of sculpture and architecture influenced his ideas for fortifications, while his study of painting shaped his thoughts on a perfect world.  For these reasons, I’m especially pleased the U.S. Embassy could participate in today’s events, which celebrate both his military prowess and his artistic sensibilities.

Kosciuszko was joined in the nascent United States of America by Hungarian general Mihaly Kovats.  Together, their vast expertise helped shape the foundations of the United States military tradition, from our cavalry traditions to fortifications.  From its earliest days, the citizens of the United States of America could thank the contributions of people from all over the world in defending the revolutionary concept of a representative government by, of, and for the people, with checks and balances to rulers’ powers.

These concepts would soon thereafter be enshrined in our enduring Constitution, which opens with the Preamble:

We the People of the United States, in Order to form a more perfect Union, establish Justice, insure domestic Tranquility, provide for the common defence, promote the general Welfare, and secure the Blessings of Liberty to ourselves and our Posterity, do ordain and establish this Constitution for the United States of America.

Today, General Kosciuszko’s contributions to forming that Union are remembered in monuments across the United States, including in my hometown  of Chicago, and evoked in several ways in Hungary.  They are part of the foundation of the great friendship between Hungary and Poland, now celebrated each March 23 and recalled in the saying:

“Pole and Hungarian – two good friends, joining fight and drinking at the end. Both courageous, both lively, let God bless them”

I thank you for inviting the Embassy to participate today and for recognizing the great work of General Kosciuszko and General Kovats in that common defense to secure the Blessings of Liberty that Americans enjoy today.  Thank you and enjoy this event.